The title of this article is ambiguous. Further meanings are listed under Hainichen (disambiguation) .

Hainichen is a small Saxon town with almost 9,000 inhabitants in the center of the Central Saxony district . It is located 26 kilometers northeast of Chemnitz , 66 kilometers southeast of Leipzig , 44 kilometers west of Dresden , 17 kilometers northwest of Freiberg an der Kleine Striegis .

Mentioned for the first time in 1276, the city gained national importance through the manufacture of cloths . The automotive industry ( Framo , Barkas ) played an important role from 1933 to 1990, and an automotive supplier has dominated since 1990.

Hainichen is the birthplace of the university professor and fabulous poet Christian Fürchtegott Gellert , the mineralogist Christlieb Ehregott Gellert and the inventor of wood grinding , Friedrich Gottlob Keller . The city is therefore also called Gellertstadt .

All neighboring communities are in the district of central Saxony

The districts belong to Hainichen:

Hainichen is located in the northeast of the Vorerzgebirge depression , which contains coal seams as well as sand and clay deposits. It is an intramontane sedimentary basin that was formed in the Lower Carboniferous .

The clay was mined until 2008 and burned into bricks. The hard coal deposits turned out to be not exploitable.

From the foundation to 1800 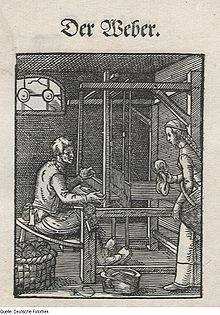 Hainichen was founded in the second half of the 12th century by Franconian settlers as a Waldhufendorf and was first mentioned in 1276 as a market town villa forensis Heynichen . In a document from 1282 one reads “… Frankenberg et Haynnechyn opida nostra…” here Hainichen, together with the neighboring town of Frankenberg, is referred to as a city.

Coat of arms of the von Schönberg family

The von Honsberg family ( Arnsdorf ) was first mentioned as the owner of Hainichen in 1283 . There is evidence that this family owned the town until 1435. Shortly afterwards, the property passed to the von Maltitz family , but Hainichen sold them to the von Schönberg family in 1446 .

The basic rule , including the patrimonial jurisdiction was up to the manor Oberschona and later the manor Wingendorf . On February 1, 1851, Hainichen received municipal rights and jurisdiction was transferred to the Saxon state.

The manorial power of the later districts of Berthelsdorf, Bockendorf, Crumbach, Cunnersdorf, Eulendorf, Riechberg and Schlegel, on the other hand, was owned by the Cistercian monastery Altzelle (later: Amt Nossen ), founded in 1162 , while Hainichen belonged as an exclave to the Wingendorf manor ( Freiberg district office ). Ottendorf , Falkenau and Gersdorf bei Hainichen did not belong to the monastery at any time; as exclaves they were under the rule of Arnsdorf ( Leisnig Office ).

The inn "Goldener Löwe" was first mentioned in 1586.

On April 23, 1800, Hainichen was hit by a tornado of the highest class F5 (according to the Fujita scale ), making it one of the only two previously known F5 cases in Germany. A big city fire on July 14, 1832 destroyed "194 residential buildings, 130 back buildings, the school, the town hall and the hospital". The characteristic heists were created when the houses on the market were rebuilt .

A Gellert Foundation for the poor was established in 1815. From 1859 they operated the Gellert Children's Home (upper Stadtgraben 1). In 1871 this was closed and the capital was handed over to the city council.

In 1838 the stock corporation Hainichener Steinkohlenbauverein was founded but was dissolved again in 1842. In 1849 the Hainichener Steinkohlenbau-Aktienverein was launched, which also dissolved again in 1853/54. A coal mining association in Berthelsdorf was founded in 1857. The time of the dissolution is not documented here. Overall, the hard coal deposits in Hainichen turned out to be unsustainable.

In 1843, the city's membership of the Freiberg district office as an exclave ended when Hainichen was assigned to the Nossen office surrounding it. With the end of Schönberg's patrimonial jurisdiction , jurisdiction was transferred to the Royal Court of Hainichen on February 1, 1851. This was followed by the Hainichen court office . The current district court building was built in 1878 at Richtstrasse 26. In 1879 the court office was converted into the Hainichen District Court. From 1875 Hainichen was subordinate to the Döbeln administration . On July 14, 1870, the official spelling of Hainichen for the city name took place. Previous spellings were Heynichen (1276), Heynnechyn (1282), Heynchin (1335), Heinchin, Henichin (1350), Heynichen (1473), Hähnichen (1721) and Haynichen (1791).

Around 1859, Hainichen was named “Official u. Factory town ”and has wool , cotton and linen mills , cleaning goods factories , a tannery and a wool trade. Hainichen achieved fame across Europe for the quality of its flannel and frieze fabrics . The industrial development of Hainichen was favored by the Roßwein – Niederwiesa railway line . The Niederwiesa – Frankenberg – Hainichen section was opened in 1869 and expanded in 1874 to Roßwein . Another railway line from Hainichen to Freiberg was requested by Hainichen and discussed in the state parliament in 1900 and 1912, but never realized.

Around 1885 there were 22 spinning mills , 2000 looms, dye works and bleaching as well as leather , leather lacquer, chenille and plush factories . From November 4, 1900 to April 1, 1934, Hainichen was home to a technical center where up to 400 students studied mechanical engineering and electrical engineering.

The automobile industry has been an important branch of industry in Hainichen since 1933. This year has been light trucks production of Framo -Werke from the neighboring town of Frankenberg moved to Hainichen. Framo moved into the bankrupt wool hair combing and spinning mill belonging to the Nordwolle group. 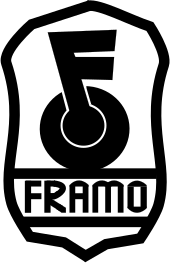 From April 4 to June 13, 1933, there was an internment camp (early concentration camp ) of the SA in the people's and sports center on Oederaner Strasse. Approx. 200 to 300 men passed through this camp. Sympathizers, members and functionaries of left-wing parties were interned. The prisoners were then taken to Sachsenburg and Colditz concentration camps .

A women's subcamp of the Flossenbürg concentration camp was operated from September 2, 1944 to April 30, 1945. The 500 Jewish women from Hungary and Poland were housed in Frankenberger Strasse (former needle factory) and had to do forced labor in Gottlob-Keller-Strasse ( Framo -Werke) . There are reports of a brutal female superintendent. At least twenty concentration camp prisoners lost their lives in Hainichen (see memorials). The prisoners were taken to the Theresienstadt concentration camp in April 1945 . In the spring of 1945 there was an SS camp in the Goßberger Wald for around 1,500 female prisoners. In addition, there were other women and men from the countries occupied by Germany (especially France and Serbia) as forced laborers , many of whom worked in agriculture. At least four slave laborers died in Hainichen (see memorials).

Since the end of 1944, displaced persons from the eastern regions of the German Reich began arriving in Hainichen. They were accommodated in the 'Goldener Löwe' hotel and then divided among Hainichen families. As a result of the arrival of the displaced, the population reached its peak. Many Silesians and East Prussians still live in Hainichen today.

1945 actual and suspected Nazis from Hainichen and adolescents, where membership of the werewolves were accused in the NKVD - internment Toszek and Special Camp No. 1 Muhlberg. Interned. The managing director of Framo-Werke, Hans Rasmussen , dies in Toszek, among others.

Barkas B 1000 in a fire brigade version

The Framo plants were completely dismantled as a reparation payment . All production facilities were moved to the Soviet Union . In 1946 the production of household goods such as pots, handcarts, potato baskets and spare parts for cars, including grenade blanks that were still stored at the Hainichen train station towards the end of the war, begins. Vehicle production was resumed in 1949. 1957 emerged from the Framo works of the VEB Barkas works . From 1961 to 1991, light trucks and minibuses of the Barkas B 1000 brand were produced in Hainichen . Final assembly took place in Hainichen, while the body shell and components were manufactured in Frankenberg and Chemnitz .

From 1952 to 1990, Hainichen was the seat of the administrative unit of the district of Hainichen in the Karl-Marx-Stadt district of the GDR. The 800th anniversary celebration took place in 1985.

In the afternoon of October 7, 1989, a demonstration by almost 20 young people took place, which was broken up by the People's Police . Following a disco event in the Kreiskulturhaus, to which several of the demonstration participants had gone in the afternoon, another spontaneous demonstration of around 150 people on Gellertstrasse took place on the night of October 7th to 8th was dissolved. At least 30 people were arrested and held in the dining room of the brickworks under inhumane circumstances. At least 7 people were transferred to the prison on the Kaßberg in Karl-Marx-Stadt . Due to continued pressure from the population, the prisoners were released on October 12 and 13, 1989.

On November 2, 1989, an investigative commission was formed in Hainichen to investigate the events of 7/8. October 1989. At least eight charges were brought against members of the German People's Police and four convictions were pronounced.

Production of the Barkas B 1000 was discontinued in 1991. The machinery was dismantled, but the intended relocation of production to China , Russia or Lithuania did not take place.

In 1994 the district of Hainichen was dissolved and Hainichen lost the status of a district town. Since then, the city has belonged to the Mittweida district , which became part of the Central Saxony district in 2008. In 1995 the case of the chairman of the board of the Kreissparkasse Hainichen, Kurt Fischer, caused a sensation, who was found guilty of a planned kidnapping of the district administrator Andreas Schramm . In 2005 the Gellert Gymnasium was closed. 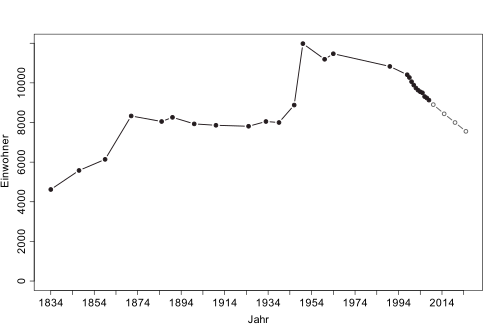 Population development from 1834 to 2008 (black, full circles) and forecast to 2025 (gray, open circles). Population figures from 1990 onwards refer to the territorial status from 1999, i.e. including the villages that were later incorporated.

Hainichen is traditionally influenced by Protestants. In 1925, 92% of the population was Protestant and 2% Catholic. There was also a small Jewish community of 14 people in 1925. Hainichen has two churches. The Trinity Church of the Evangelical Lutheran community (built in 1899) and the Sankt Konrad Church (built in 1936) of the Catholic community. The Trinitatis Church is the tallest building in Hainichen at 72 m. The Catholic parish has belonged to the parish of St. Laurentius Mittweida since 2002. Since September 1st, 2015 the parish of Sankt Konrad has been looked after from Sankt Johannes der Täufer (Freiberg). Since 1993 Hainichen has had a family and youth center run by “Youth with a Mission”.

A majority of the people of Hainichner are not religiously bound today, like around 75% of all residents of Saxony. 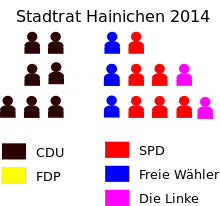 Allocation of seats in the city council

Dieter Greysinger (SPD) has been the mayor of Hainichen since December 1, 2004.

Gellert monument in front of the Hainichen town hall

Hainichen has a literature museum in honor of Gellert as well as one of around 30 camera obscuras that can be walked around the world .

Filmmaker Rainer Simon was born in Hainichen and shot parts of the DEFA feature film Fernes Land Pa-isch (1993/94) in his hometown.

The city is located in the tariff area of ​​the Verkehrsverbund Mittelachsen (VMS). The upper center of Chemnitz can be reached via the regional train C15 (formerly 516) of the City-Bahn Chemnitz , which runs every hour. In 2004 the Roßwein – Niederwiesa railway line (course book line 516) was reopened after extensive reconstruction on the section to Hainichen. The section from Roßwein to Hainichen through the Striegistal was closed in 2001. It was dismantled so that a cycle path can be built. Since the completion of stage 1 of the Chemnitz model, there have been free connections from Hainichen to downtown Chemnitz.

The following facilities and institutions are based in Hainichen:

→ Main article : List of personalities from the city of Hainichen

Localities and districts of the city of Hainichen