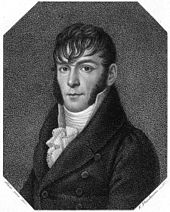 Friedrich August Gottlob Schumann (born March 2, 1773 in Endschütz , † August 10, 1826 in Zwickau ) was a German writer, bookseller and publisher and the father of Robert Schumann .

Youth and first years of work

August Schumann was the eldest son of a penniless pastor from a Thuringian landowner family. From 1788 to 1791 he was apprenticed to a merchant in Ronneburg, Thuringia . In 1791/92 he worked as an office clerk in Hohenstein and Leipzig, but had artistic interests and wanted to become a writer. In 1792 he enrolled at the University of Leipzig to pursue humanistic studies and his interest in literature, but had to break off his studies due to financial bottlenecks. In 1793 he published his first work, the play Die Familie Thalheim .

August Schumann sent a manuscript for a novel entitled Ritterscenen und Mönchsmärchen to the publisher GH Heinse in Zeitz , who offered him a job as an accountant in his bookstore. In Zeitz he met Johanna Christiana Schnabel (1767-1836), a great niece of the poet Lessing . Their father, the respected council surgeon Abraham Gottlob Schnabel, made his daughter's connection with a “literary bookseller” dependent on the future son-in-law having to work at least as an independent businessman.

In 1795 August Schumann opened a materials store himself in Ronneburg, in which he invested almost 1000 thalers, the profit from his writing over the past year and a half, and his Leipzig friend and bookseller Johann Ambrosius Barth acted as commission agent. In the same year Schumann was allowed to marry Johanna Christiana Schnabel, who gave birth to five children, including the youngest of the siblings Robert Schumann (1810-1856).

Schumann set up his extensive book collection as a public lending library and continued his literary work. The first publishing house, founded in 1799, offered almost exclusively works from his pen. In 1808 the family moved to Zwickau, where August Schumann continued the bookstore under the name "Gebrüder Schumann" - his brother Friedrich Schumann had already opened a bookstore in Zwickau in 1807, but left the business in 1810. 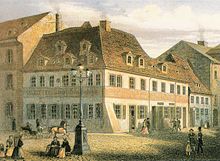 The publishing house Gebrüder Schumann in Zwickau published a pocket library of the foreign classics in new Germanizations , which brought it to over 250 volumes. The highly acclaimed translations of the English-language works by Walter Scott and Lord Byron were provided by Elise von Hohenhausen , for example . At the same time, the works of the English, French, Italian and Spanish classics were published in the original language ( Pocket edition , Bibliothèque portative , Bibliotheca portatile and Bibliotheca portátil ). The series could also be obtained by subscription.

“The appearance of these cute editions, which are certainly particularly welcome to any friend of literature, especially on trips and walks, is so nice and delicate that it really leaves nothing to be desired,” said a reviewer of the Jenaische Allgemeine Literatur-Zeitung : “Druck und The paper is equally beautiful and clean, and the title coppers, although not continuous, but still for the most part, in drawing and engraving, and an addition that is all the more pleasant as they contain the portraits of all the writers, their biography and general characteristics at the same time is included everywhere in a very useful overview drawn from the best sources. "

From 1800 he published a merchant and manufacturer address book under the title The industrious Germany . Later August Schumann founded the provincial newspaper Der Erzgebirgische Bote (1807-1812) as well as the souvenir sheets for educated readers from all classes (1813-1826). The publication of a collection of portraits of "excellent princes, statesmen and military" became a further economic pillar.

Schumann published works by Bürger , Klopstock and Musäus from contemporary German-language literature . The most famous published work was the 18-volume Complete State, Post and Newspaper Lexicon of Saxony , the publication of which was continued and completed by Albert Schiffner after his death .

August Schumann tried in 1825/26 to train his son Robert Schumann with Carl Maria von Weber . But before a corresponding agreement could be reached, both Weber and August Schumann died in the summer of 1826.

Robert Schumann's eldest brother, Eduard Schumann, ran the publishing bookstore in 1824 as co-owner and from 1833 as sole owner and finally sold the pocket editions in 1837 to the bookseller JG Lindemann in Zwickau. The Schumann publishing house existed until 1840. Thanks to August Schumann's initiative, Zwickau developed into the leading city in the German book trade around 1820.