The title of this article is ambiguous. Further meanings are listed under spiders (disambiguation) .

Yarn wound crosswise as a product during spinning

Spinning means on the one hand the "spinning" of staple fibers into yarn (colloquially also known as thread ) in the textile industry , on the other hand the "spinning" of filaments (continuous fibers) from natural and synthetic polymers as well as non- polymer raw materials in the chemical fiber industry . The spinning of man-made fibers is also known as primary spinning, spinning in the textile industry as secondary spinning . 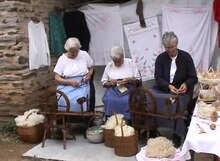 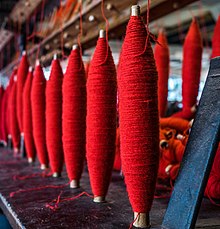 Like weaving , spinning is one of the oldest techniques known to man. Processes gradually refined over time, and new techniques for making the threads emerged. Therefore, spinning today means three things:

Many types of fiber can absorb significant amounts of moisture. Some of this moisture is lost during spinning. Therefore is to trade with yarns avoirdupois surcharge defined. From the measured net weight and the measured (or assumed) moisture, a gross yarn weight is determined for invoicing.

The quality of the fibers used and the way in which they are spun are decisive for many properties of the resulting textile.

The further processing of the finished spun yarn takes place in a wide variety of ways, e.g. B .:

Hand spinning was done either with bare hands or with a hand spindle . Spinning by hand in Europe began as early as 6000 BC. Chr., To point the whorls of Sesklo -Culture in early Neolithic Greece and from the Starcevo-Koros Culture . Spinning whorls are also common in the linear ceramic culture . They were found in particularly large numbers in Bad Nauheim -Nieder-mörlen, which, according to Schade-Lindig, may indicate a special importance of the place. It is not clear whether animal fibers ( wool ) or vegetable fibers ( flax ) were spun. The wool sheep was still unknown, but the cultivation of flax is documented, but the oil-containing seeds may also have been used here. Textile finds from the Neolithic wetland settlement of Arbon-Bleiche in Switzerland show that flax fibers were not spun, but only twisted at the ends.

Rocks have been documented since the Iron Age. For Roman antiquity there are descriptions of spinning, especially of the spinning Parzen , for example in Catullus . The raw fiber was attached to a rock ("Kunkel"). One hand pulls a bundle of fibers from the store on the skirt, while the other turns the spindle. If the yarn has become so long that the spinner's arm is no longer sufficient, she winds it onto the spindle. Images of Greek vases show that the skirt was very short and held in the hand. Only later was it lengthened so that it could be tucked under the armpit, leaving one hand free.

Another device for hand spinning is the spinning wheel , which began the development of mechanical spinning. It is mentioned in a chronicle of Speyer in 1298 and also appears in various other European regions in the 13th century. Its origin can be found in China . The first references to the wing spinning wheel can be found in the house book of the princely family Waldburg-Wolfegg from 1480. The invention of this spinning wheel, attributed to Jürgen von Wolfenbüttel , should be a legend. Around 1500 Leonardo da Vinci also constructed a vane spinning wheel. In addition, hand spinning remained in local use into the 20th century. 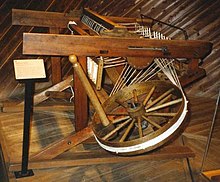 A spinning jenny in the Museum for Early Industrialization in Wuppertal

Important points in the development of mechanical spinning:

Today there are only a few spinning mills in the industrialized countries. Most of the spinning mills are located in Asia, namely in China and India. Many of the machines for spinning and for all preliminary stages still come from Central Europe.

Manufacture of yarn from staple fibers

The entire spinning process for processing staple fibers is divided into many individual work steps. The preparatory steps are:

Only then does the actual spinning come. The ring spinning and rotor spinning are the most important procedures. 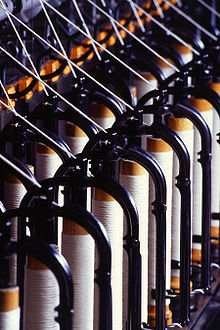 Before ring spinning the stretch band is flyer frame (flyers) to a fuse roved.

The most widespread is ring spinning, in which the fuse is stretched by a factor of about 15–80. The thin sliver is then immediately twisted evenly. A small metal bracket, the ring traveler , rotates on a circular guide, the spinning ring , around a spindle and winds the yarn on a tube and forms the cop . One twist is introduced into the yarn for each turn of the ring traveler.

Ring yarns have a linear density of 4  tex to 2000  tex . While the coarse denier is produced as carded yarn or semi-worsted yarn , the main area of ​​application in cotton spinning (short fiber spinning) is between 4  tex and 120 tex.

When processing natural fibers, the production speed is limited by the friction between the ring traveler and the spinning ring. Runner speeds of 50 m / s to 60 m / s can be achieved. Nevertheless, the speed of the ring traveler is limited to a maximum of 42 m / s in practical operation. The resulting spindle speed is up to 25,000 revolutions per minute and the delivery up to about 40 m / min. When processing man-made fibers, the friction between the yarn and the thread-guiding components and the associated frictional heat limits the speed of the ring traveler to around 25 m / s to 32 m / s, depending on the fiber. Ring spinning machines have up to 1824 spinning positions.

An important boundary condition for the process, depending on the spun material, is the humidity in the production room .

After ring spinning, several bobbins are rewound onto a larger bobbin (cross bobbin) . This is done on a winding machine , which during the rewinding process usually checks the yarn optically or capacitively at the same time and cuts out any defects or dirt.

Large spinning mills are now equipped with up to 100,000 spinning positions. Modern machines have automated processes for exchanging the bobbins, for their further transport to the winding machine, for the optical monitoring of thread breaks and for the acquisition of operating data .

An open spinning position of a rotor spinning machine, on the left the rotor, on the right in the middle of the cover the nozzle

Rotor spinning (also: OE rotor spinning, English o pen and nd) was only newly introduced in 1955 by Julius Meimberg and is less common than ring spinning. Around 20% of the world's yarns made from staple fibers are produced on rotor spinning machines. Traditionally, rotor yarns with a market share of 44% are produced in North America or in Europe with a market share of 37% in the western part and 76% in the eastern part. Compared to ring spinning, the spinning process is much faster and therefore cheaper.

There is no pre-spinning on the flyer, the machine can be supplied directly with the draw frame sliver or with card sliver for coarse yarns. The sliver is first broken up into individual fibers by an opening roller rotating at up to 10,000 revolutions per minute , and the fibers are conveyed by an air stream into a very fast rotating drum with an inwardly inclined wall - the spinning rotor - whose speed is up to 175,000 revolutions per minute amounts. Due to the acceleration of the fibers on the wall of the rotor and the centrifugal force acting on the fibers , the fibers get into the rotor groove.

A feed thread is required for piecing. The end is roughened and sharpened. The thread is then fed through the nozzle into the rotor groove, where the fibers collected there are wrapped around the thread. A precise synchronization of the feeding of the stretching tape, the introduction of the feed thread and the immediate removal of the new thread ensures that the attachment point is as thin as possible but stable. The mass of the thread is the result of the amount of the drawn stretching tape and the withdrawal speed of the thread. For an even, firm thread, numerous other parameters such as the rotor speed must be precisely coordinated with one another. The yarn is wound directly onto a package - rewinding is not necessary.

The spinning rotors used for staple fibers have a diameter of 26 mm to 66 mm. The drawing is up to 400 times on the rotor spinning machine. A rotor yarn has about 10% to 20% less strength than a ring yarn. The choice of rotor and nozzle can significantly influence the volume and hairiness of the rotor yarn. Rotor spinning machines have up to 600 spinning positions.

Production of filaments (continuous fibers) from polymer melts or solutions

The conventional processes for spinning man-made fibers can be divided into:

In solution spinning, the spinning mass is created by dissolving the polymer or a derivative of this polymer in a suitable solvent. This spinning mass is pressed through holes in a spinneret . The resulting spinning solution jets are converted into filaments in the wet spinning process by displacing the solvent in a spinning bath or a spinning bath . This includes the viscose process for the production of [viscose fibers] n -Fibers (PAN) are made by wet spinning. In the dry spinning process, filament formation occurs through evaporation of the solvent. After that, z. B. Acetate Fibers (CA). Electrospinning for nanofibers can also be counted as a special process.

Melt spinning refers to the production of synthetic filaments from a polymer melt . A liquid, because it is hot, polymer is pressed through a spinneret with several holes, stretched, cooled and wound up. In order to give these filaments special three-dimensional structures, they can also be textured . The filaments (endless fibers), which are in principle infinitely long, are also cut into staple fibers and spun according to the processes used in the textile industry. Are produced e.g. B. polyamide (PA), polyester (PES) and polypropylene (PP) fibers. Special processes for fiber formation from melts are the centrifugal process, the jet blowing process and the rod drawing process.

With dispersion spinning (also known as matrix spinning ) filaments are produced from infusible and insoluble polymers, which are emulsified or suspended in the solution of a spinning agent. After the filaments have formed, the spinning agent is released, melted out, evaporated or decomposed. The remaining filament is solidified by sintering. Manufactured afterwards z. B. polytetrafluoroethylene fibers (PTFE) and ceramic fibers.

Spinning often plays a role in myth and is assigned to a number of goddesses of fate - such as the Greek clotho (compare Moiren , Parzen ). Spinning and weaving are considered to be the invention of the goddess Athena . The mortal arachne , whom the goddess wanted to surpass in the art of spinning and weaving, turned her into a spider as a punishment. Arachnida is still the scientific name for arachnids today. In Germanic mythology, the Norns spin the threads of fate.

In fairy tales , spinning is evidence of hard work or inner maturation processes and often functions as a marriage test for the woman. So in the following children's and house tales (KHM) by the Brothers Grimm : The Twelve Brothers (KHM 9), The Three Spinners (KHM 14), Frau Holle (KHM 24), The Six Swans (KHM 49), Sleeping Beauty (KHM 50) , Rumpelstiltskin (KHM 55), Allerleirauh (KHM 65), The Twelve Hunters (KHM 67), The Water Mermaid (KHM 79), The Lazy Spinner (KHM 128), The Schlickerlinge (KHM 156), The Mermaid in the Pond (KHM 181 ), The goose-girl at the fountain (KHM 179), spindle, shuttle and needle (KHM 188), or in the Viennese legend Spinnerin am Kreuz .