The hand spindle is a simple device for locking spinning of fibers into a thread or yarn . It consists of a rod-shaped shaft and a swing weight ( flywheel ). The swing weight stabilizes the rotation and, by a thickening of the stem or pushed onto the shaft spindle whorl (also Wirtelstein or Würtel be formed). It is usually located at the top (head or whorl spindle) or in the lower area of ​​the shaft (foot spindle). Spindles with a central swing weight or two spaced-apart spindle whorls are also known.

Since the spindle shaft was often made of perishable material (wood), while the whorl was made of imperishable material (amber, antlers, bones, ceramics, coral, glass, metal, stone and wood), findings of whorl-shaped objects suggest the use of hand spindles. Properties that make a whorl are a rotationally symmetrical shape, a central hole perpendicular to the plane of rotation that is large enough to put a spindle shaft through it, and a certain size and weight necessary for proper functioning (i.e. as long as possible, uniform, wobble-free Rotation) are necessary. In archeology, confusion with very large pearls cannot be ruled out.

Evidence of spindle whorls in Europe date from the 6th millennium BC. From early Neolithic settlements in Greece , e.g. B. Achilleion . In Scandinavia , spindle whorls made from bone, soapstone , sandstone , slate and clay have been found. Some rare specimens were made of lead , bronze , ivory , glass (e.g. in the grave of Kville-Berg in Tanum in Bohuslän), pitch coal ( Gagat ), marble , quartz or quartzite and wood (in Uppsala and the monastery church of Vreta in Östergötland found). Only with the advent of the spinning wheel in the 13th century did hand spindles - and thus spindle whorls - gradually go out of use.

Already 2000 years earlier, arable farmers in the Levant had been producing textiles . It is unclear whether these were made of flax or flax or animal wool because they were not preserved. Preserved linen clothing does not appear in Egypt until the 3rd millennium (garment of Tarchan ).

Whorls are found in many prehistoric graves and settlements. A spindle whorl made of amber, found in the Venetian women's grave in Hallveda, shows the special importance of the whorl due to its material value. 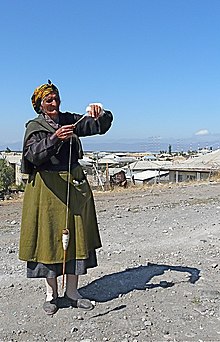 Working with the drop spindle in Armenia

In today's ring spinning machines, the whorl is the part that drives the spindle. The shaft (rod of the hand spindle) alone is sometimes referred to as the spindle. The upper end of the shaft can be shaped differently: tapering, with a metal or carved hook, with a notch or groove, or a central or spiral groove.

A hand-held spindle has two main functions: first, to twist attached fibers together by turning on its own for a while once you have set it going. Second, the storage of finished twisted yarn that is wound onto the spindle shaft. The handling of the fiber supply and the spindle differs depending on the fiber, the purpose of the yarn and cultural habits. There are three basic types of handling:

The fiber supply is held in one hand; the other hand alternately turns the spindle and pulls the desired amount of fibers from the supply. This means that the spindle has to be released again and again so that it rotates freely hanging on the spinning thread. As the length of the filament increases, the spindle hangs lower and lower. At the latest when it has reached the bottom, the yarn must be wound up. Since the weight of the spindle depends on the spun thread, it must have a corresponding tear resistance, so that this technique is rather poorly suited for short fibers and fine yarns. In addition, the spindle should be particularly symmetrical and balanced so that it does not wobble. Since the distance to the ground should be as large as possible so that you do not have to wind up often, the spinning end usually stands.

When a rock is used, both hands are free to spin, so that one hand pulls out the fibers while the other turns the spindle only. This hand is constantly holding and turning the spindle so that at least some of the weight is taken off the spun thread. This technique is faster than the drop spindle technique and is better suited for the production of thin yarn. Images of this technique can be found in the European High Middle Ages and well into the 19th century; a variation of this is common in Latin America. It can be operated while sitting as well as standing and walking.

If the spindle is supported with the lower end, one speaks of a stand spindle (English "Supported Spindle" ). In order to prevent the spindle from breaking out to the side, special shells are often used in which the spindle stands. Special spindles are not absolutely necessary, but the ends of the feet are often pointed to minimize friction. Since the weight of the spindle does not depend on the spinning thread, particularly fine, short-fiber yarns can be spun with stand spindles, such as cotton with the Indian takli. The spindle can also be particularly large and heavy, such as. B. Navajo spindles , which are about 75 cm long. The spider is usually seated. 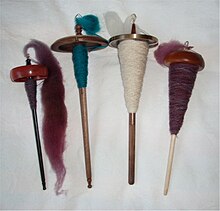 The advantage of the hand spindle over the spinning wheel is that it can be easily transported and used during many activities in normal life (e.g. herding sheep, walking, waiting for the bus or in the waiting room). This relativizes the slower spinning speed compared to the stationary spinning wheel. However, a worker in today's industrial spinning mill produces several thousand times more yarn than by hand, measured in kg of yarn per hour worked.