Flax ( Linum ) or flax called, is a genus within the family of Flax Family (Linaceae) with about 200 species .

It is one or two years or perennial herbaceous plants , semi-shrubs or shrubs , some of them evergreen , with upright stems . They have sessile, entire leaves , stipules are usually missing.

The short-lived flowers are five-fold and radially symmetrical, usually free, occasionally fused at the base and bloom blue, yellow, red, pink or white. The ten- compartment capsule fruits contain a black or brown seed in each compartment.

Flax is found in the temperate and subtropical regions of both hemispheres.

The "flax genus" is the largest in the family of Flax Family and is filed there in the subfamily Linoideae.

The internal system of the genre is not consolidated, although it has always been worked on intensively. A system of species complexes and groups was in use for decades, especially for the American species. As a reference for the entire genre, H. Winkler's division of the genre into six sections from 1931, reproduced here in a version slightly updated by Axel Diederichsen and Ken Richards, still serves . The Eulinum section, which is often cited in the literature, is divided into the two sections Linum and Dasylinum . The following list is not exhaustive; it is a selection: 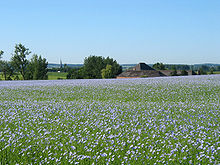 Some types ( common flax , perennial flax , two-year flax ) are or were used for fiber production. The history of its use goes back 6,000 to 10,000 years, making the linseed genus some of the oldest cultivated plants . In addition to being used in textiles, types of flax are also used as technical fibers, as medicinal plants (for example, Purgier flax ), as food ( flaxseed ) and for the production of linseed oil with a wide range of uses (for example oil paint ).

The most important seed oil plants in prehistoric Central Europe were flax and poppy seeds . In view of the comparatively low traceability - flax seeds puff up when charred and are barely recognizable as fragments - their significance is likely to have been greater than the picture suggests. Camelina ( Camelina sp. ) Seems to have grown on common areas with flax. In the case of flax, the seeds do not tell whether they were used as linseed or fiber flax. Finds from Langweiler in the Rhineland and Eisenberg in Thuringia suggest that it is Springlein ( Linum usitatissimum subsp. Crepitans Elladi is). Rhenish reserve finds give evidence of locks (Dresch-Lein) ( Linum usitatissimum subsp. Usitatissimum ). The seed finds show that flax was grown separately from other crops and used as a source of fat.

Flax is more widespread in western ceramics and occurs, with the exception of Bohemia, only west of the Elbe. There is, however, no doubt about the Near Eastern origin of the small culture. The wild form is widespread in the circum-Mediterranean region and in the Middle East and Central Asia. In Central Europe, the plant is grown today as a summer, only in the foothills as a winter, as in the past. In the Middle Neolithic, flax is found less often. In the Rhineland and in the Michelsberg culture it was completely absent during this time.

The early to late Neolithic history of flax has been particularly well researched on Lake Zurich . Its rise began during the younger Pfyner culture . It reached its climax in the Horgen culture and remained at a relatively high level even during the cord pottery. Its spread on Lake Constance was similar. In the Young and Late Neolithic of the Federsee area, in the Pfyn-Altheimer culture and in the Goldberg III group, excessive use has been proven.

For a long time it was unclear whether seeds and flax stalks were used in the ceramic era. A well found in Mohelnice near Brno provided cords made of flax fibers. In the Levant , flax was processed into textiles as early as the 8th millennium BC (PPNB). In the southern Carpathian Basin in the 2nd quarter of the 5th millennium BC. The double use of flax as a fiber and food plant is assured for the Young and Late Neolithic . The use of the fibers is attested by the finds of flax fish made of bones and, above all, of textiles and nets made of flax, which have been preserved in the humid settlements of the foothills of the Alps.

The oldest signs of flax cultivation in Sweden date back to the Viking Age (800–1150 AD).