The title of this article is ambiguous. Further meanings are listed under poppy seeds (disambiguation) .

Poppy ( Papaver ) is a genus of plants from the poppy family (Papaveraceae) with around 100 species worldwide, mainly found in the moderate latitudes of the northern hemisphere. Only one species occurs in the southern hemisphere in South Africa. There are annual species such as corn poppy ('Papaver rhoeas'), sand poppy (Papaver argemone) and opium poppy (Papaver somniferum), but also perennial species such as Turkish poppy (Papaver orientale) and medicinal poppy (Papaver bracteatum). Some types of poppy are important because of the active ingredients they contain. Opium poppies and papaver setigerum are grown for the production of opium. The alkaloid thebaine contained in medicinal poppy seeds is the starting material for the production of opioids . The oily, pleasant and nutty-scented seeds of the opium poppy are used as food, especially for desserts and pastries. The bright red flowers of the poppy, which is widespread in Central Europe, bloom from the end of May and mark the beginning of early summer (see phenology ).

Poppy species are annual, biennial, perennial (rarely monocarpic ) or perennial herbaceous plants . The parts of the plant have a white or yellow milky sap that contains poisonous alkaloids . The ascending to upright stems are usually hairy with bristles, rarely bare, branched or unbranched and can be leafy or not.

The alternate, spirally or distributed on the stem arranged in a basal rosette leaves are sessile stalked up. The leaf blade can be divided or simple. The leaf margins are seldom bare, usually indented or serrate. Stipules are missing.

The many stamens and ovaries of the alpine poppy ( Papaver alpinum subsp. Alpinum )

The flowers are usually solitary or rarely in racemose zymous inflorescences . If inflorescence stems are present, they are usually hairy with bristles. Usually the egg-shaped to spherical flower buds are drooping before they open and the petals are in a "wrinkled" bud position. The hermaphrodite flowers are radially symmetrical with a double flower envelope . The two (rarely three) free, mostly bristly haired sepals fall off when the flower opens. The color of the four (rarely five or six) petals varies depending on the species from mostly red, orange-red to yellow, rarely white or lavender. The many (50 to 100) free, fertile stamens are formed centripetally. The stamens are white, yellow, green, purple to red or sometimes blackish. The anthers are elongated to spherical. Four to 24 carpels are a top permanent, unilocular ovary deformed, the hairy bristly or bare and is generally egg-shaped. There are many ovules . There are as many scars as carpels. These sit directly on the ovary and form a "scar disc"; There are no styluses . The edges of the disc are indented or divided. Pollination occurs by insects ( entomophilia ). 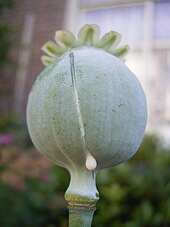 There are bristly hairy or bald, rarely prickly, hard, open or closed capsule fruits that contain many seeds. These are so-called pore capsules , a form of capsule fruit that is common in only a few plant species . These serve for a semachore spreading: If the stem tilts - some species support this by drying the stem with a kink - by wind or contact, the seeds fall out of the pores like from a salt shaker. The oil-containing seeds (formerly called Magsamen ) are black, brown, dark gray or white, small and kidney-shaped. The basic chromosome number is x = 7.

The first publication of the generic name Papaver was made in 1753 by Carl Linnaeus in Species Plantarum , 1, p 508. As lectotype was in 1913 by NL Britton and A. Brown in Ill. Fl. NUS , second edition, 2, p. 136 Papaver somniferum L. laid down. The genus Papaver belongs to the tribe Papavereae in the subfamily of the Papaveroideae within the family of the Papaveraceae .

Since Kadereit 1988, the Papaver genus has been divided into eleven sections:

There are about 50 to 120 (probably today about 80 to 100 species) Papaver species, mainly in the temperate areas of central and southern Europe and Asia, also in the New World, Oceania, Australia, in northern Africa and only one species in South Africa. Here is a selection:

Opium poppy seeds themselves do not contain any opiates, but depending on the harvesting method, residues of the opiate milky sap of the seed capsules can stick to them. The consumption of food containing poppy seeds was therefore prohibited in German prisons, as this can lead to positive results in urine tests for opiates and it is not possible to distinguish whether the alkaloids were ingested through the consumption of drugs or the consumption of the named foods.

In Germany only two varieties ('Zeno morphex' and 'Mieszko') with a very low morphine content are permitted for cultivation. In Austria, the cultivation of opium poppies is completely legal and can look back on centuries of tradition. Well known is the Waldviertel gray and blue poppy, which can be found in many recipes of Austrian pastry cuisine, but also on countless shelves of grocery stores. Today, however, there is also an increasing number of poppy seeds from other countries on the market, the morphine content of which can be greatly increased due to unclean harvesting methods that leave residual amounts of opium. For this reason, poppy seeds should not be used in baby food. In the case of poppy seed cakes and poppy seed rolls, the opiates can be rendered ineffective by heating them in the oven.

Poppy is considered the national flower of the Republic of Poland . Among other things, the 'Mieszko' variety is named after the Polish prince Mieszko I of the same name from the 10th century.

In the collective memory of the British, the poppy is associated with the four battles of Flanders during the First World War . He decorates the two national tombs of the unknown soldier in the form of artificial images . A 19-year-old man was arrested in the United Kingdom on November 11, 2012 for showing burning poppies on the Internet. In another case, a man who publicly burned plastic replicas of poppy seeds was fined.

In the Mysteries of Eleusis , the poppy was used as a symbol of the earth, of sleeping and of oblivion in honor of the goddess Demeter .