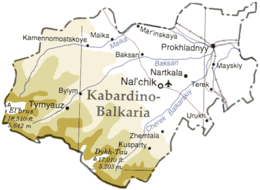 Kabardino-Balkaria in a regional context

Kabardino-Balkaria lies on the northern slope of the Caucasus . From a topographical point of view, the northern part of the country is flat, while the country becomes increasingly mountainous towards the southwest up to Elbrus , the highest mountain in the Caucasus. The republic borders in the west on Karachay-Cherkessia , in the east on North Ossetia-Alania , in the north on the Stavropol region and in the south on Georgia . The maximum extension in north-south direction is 167 km, in east-west direction 123 km.

The republic has a continental climate .

The average temperature in the flat north is −4 ° C in January and 23 ° C in July, the amount of precipitation is low with less than 500 mm.

Kabardino-Balkaria is in the Moscow Time Zone (MSK). The shift to Coordinated Universal Time (UTC) is thus +0300 (MSK, Moscow Time ).

The main rivers are:

There are about 100 smaller lakes in the republic. Most (55) are located between the Baksan and Malka Rivers and are barely larger than 10,000 m².

Some of the most important are:

The republic's natural resources include molybdenum and tungsten ores (near Tyrnyaus) and coal .

The population of the republic, which was 859,939 people in the 2010 census, consists of two eponymous nations. These are the Kabardines , a subgroup of the Circassians , and the Balkars , a Turkic people . There are also a significant number of Russians living in the republic . Turks , Ossetians , Ukrainians and Armenians form smaller minorities . The official languages ​​are Kabardian , Balkar and Russian . The majority of the population professes Islam , there are also members of the Russian Orthodox Church .

Development of the ethnic groups since the beginning of the Soviet era
The area was settled by the two titular nations until the end of the Tsarist Empire. There were huge population shifts during the Stalin era. While the Kabardines and Balkars lost massive proportions of the population (1926: 76.3%; 1959: 53.4%), the number of Slavic settlers grew rapidly (1926: 16.3%; 1959: 40.9%). During the Stalin era, members of the Korean minority were also resettled from the border areas in the Far East to other parts of the Soviet Union. A small part of them came to Kabardino-Balkaria.

Since the post-Stalin era, the proportion of titular nations has risen sharply (partly because of a high birth rate). At the same time, Slavs migrated back to their home regions after the end of the Soviet Union. Almost all of the minorities of the mountain Jews and Germans emigrated (to Israel and Germany, respectively). The number of other North Caucasians and Transcaucasians is significant, but ethnically variable. The number of Chechens grew massively from 1989 to 2002 - and has since fallen by half. The number of Roma and Turks is increasing rapidly. It is difficult to estimate how high the proportion of Mesheds are under the name of Turk.

The ethnic groups in Kabardino-Balkaria

Since 1991 Kabardino-Balkaria has had its own spiritual authority, the Duchownoe Uprawlenie Musul'man Kabardino-Balkarij (DUMKB). In 1992, with the support of the International Islamic Relief Organization (IIRO), a sub-organization of the Islamic World League , a state institute for Islamic law, the Shariatsky Institute , was opened in Nalchik . However, this was closed again in 1996 due to its Salafist orientation. A year later, a new state Islamic institute was opened, but from the beginning it was under the direct control of the DUMKB.

In addition to this state-organized Islam, a non-state Islamic movement developed in the early 1990s under the leadership of young imams who had studied at Islamic universities in Saudi Arabia. The central figure of the group, which came to be known as Novye Musul'mane ("New Muslims"), was Musa Mukodschew. With the aim of promoting knowledge about Islam and spreading the Islamic faith among young Muslims, he opened an Islamic center in Nalchik in 1995, which in the years that followed was spread over a number of non-official Islamic schools across the country were opened. The "new Muslims" built a central Islamic community ( jamaat ) for Kabardino-Balkaria, which was joined by all Muslim communities that did not agree with the state-traditionalist Islam of the DUMKB.

In the late 1990s, Islamic groups with a jihadist orientation emerged in Kabardino-Balkaria for the first time , who had contacts with Wahhabi fighters in Chechnya . As a result of the militant actions of these groups (attack on the Ministry of the Interior in Nalchik in August 1998), the "new Muslims" came under suspicion of terrorism and had to close their Islamic Center and the schools connected to it in 1999. Mukodschew himself was arrested in 2001 on suspicion of organizing a terrorist attack that took place in December 2000 in the city of Pyatigorsk . Although he was released a little later, he was no longer able to continue his religious activities unhindered.

Many of the “new Muslims” went underground as a result of state repression. A splinter group of the Kabardino-Balkar Jamaat , led by Muslim Atayev, published a jihad declaration against the Kabardino-Balkar government under the name Yarmuk in August 2004 . In December of the same year she carried out an attack on the Russian narcotics control authority in Nalchik and captured numerous weapons. Atayev and some of his followers were killed by state security forces in a major operation in January 2005. The increasing confrontation between state authorities and the Islamic movement led to more and more "new Muslims" joining the Yarmuk group. In October 2005, it carried out its largest action, a simultaneous attack with 150 fighters against the police, military and security facilities in Nalchik.

The Nalchik attack, which represented a military defeat for the group and was compared by its own representatives with the Battle of Uhud , was followed by a new wave of state repression against the "new Muslims" and their sympathizers. In 2006, this finally led Mukodschew to give up his violent course and to switch to the jihadist camp. The Kabardino-Balkarian Jamaat was disbanded to give way to a military organization that aims to fight the Russian infidels . Anzor Astemirov, who was one of the founders of the "new Muslims" movement in Kabardino-Balkaria, has built up close relationships with Doku Khamatowitsch Umarov , who proclaimed the Caucasus Emirate in November 2007 , and is considered head of the Sharia court in its shadow government .

The Republic of Kabardino-Balkaria is divided into ten Rajons and three urban districts . A total of 7 urban and 112 rural communities are subordinate to the Rajons (status: 2010).

By far the largest town is the capital Nalchik . Other larger cities are Prochladny , Baksan , Nartkala and Maiski . There are a total of eight cities and two urban-type settlements in the republic .

50 years of ASSR Kabardino-Balkaria (Soviet postage stamp 1971, but calculations were made here from the previous Berg-ASSR ).

Alans , Khazars , (proto-) Bulgarians and Mongols took turns in ruling the area. Some researchers count the Balkars among the descendants of the proto- Bulgarians of Khan Kubrats Khaganat , which is possibly also reflected in the derivation of the Russian name (Balkaren russ. Balkarzy , Bulgarians russ. Bulgary or bolgary ). The derivation is controversial, however, it could also go back to a group of Bolgars who nomadized north in the 12th century in the Kipchak association . Since 14./15. In the 17th century the principality "Kabarda" existed here, which in the 17th century split into the western "Great Kabarda" and the eastern "Little Kabarda". At the end of the 18th century, both fell under Russian rule. The two Kabarda principalities were annexed by Russia in 1827.

During the Soviet Union , Kabardino-Balkaria was an Autonomous Soviet Socialist Republic (ASSR). In April 1944, the Soviet authorities accused the Balkars of collaboration with the Germans and deported them to Siberia (there were 42,666 Balkars in 1939). The Kabardino-Balkarian ASSR was renamed the Kabardian ASSR , the people "Balkars" deleted from the list of peoples of the Soviet Union. As a result of the deportation, many Balkars died, according to some estimates 50%.

With the rehabilitation of the Balkars in 1957, the old name came into use again. Since 1991, with the dissolution of the Soviet Union , Kabardino-Balkaria has been a republic within Russia. The head of state is Kazbek Valerijewitsch Kokow ( Kabardian Kluèkluè Valerij i kw ”è K” azbèč ). In November 1996, an attempt by the Balkars to establish their own republic failed. On September 1, 1997, the Kabardino-Balkarian constitution was passed.

Kabardino-Balkaria is considered to be one of the most restless sub-republics of Russia in the North Caucasus federal district. The region largely survived the collapse of the Soviet Union without any serious political confrontation. The Islamist movements that were widespread in Chechnya and Dagestan at the beginning of the 1990s did not find a large number of visitors in Kabardino-Balkaria. The few radical forces got into conflicts of interest with moderate religious leaders close to the Kremlin. As a result, there were repeated attacks and armed attacks on local government officials and security agencies from the mid-1990s. On October 13, 2005, the hitherto most devastating attack occurred in the center of the capital Nalchik, in which more than 100 people were killed. According to the authorities, more than 40 law enforcement officers and 31 civilians were killed in up to 200 attacks in 2010 alone.

On the sidelines of the World Economic Forum 2011 in Davos, Russian President Medvedev announced a large-scale investment project in the region. By 2020 Moscow wants to build a ski area with a planned investment volume of 15 billion dollars. The project, called “Summit 5642”, is intended to compete with the “expensive and overcrowded resorts in the Alps”.

In addition to agriculture, forestry and mining dominate in Kabardino-Balkaria . Tourism plays a certain role in the Caucasus.

The fall of the Soviet Union and the outbreak of numerous conflicts in the Caucasus had far-reaching negative consequences for the republic. As a result of the collapse of the tourism industry, the number of unemployed rose to an estimated 90% in the region.

Poverty is a widespread problem in Kabardino-Balkaria.

On the sidelines of the World Economic Forum 2011 in Davos, Russian President Medvedev announced a large-scale investment project in the region. By 2020 Moscow wants to build a ski area with a planned investment volume of 15 billion dollars. The project, called “Summit 5642”, is intended to compete with the “expensive and overcrowded resorts in the Alps”.