The Krasnodar region ( Russian Краснодарский край , transliteration according to ISO-9 Krasnodarskij kraj , pronunciation according to Duden Krasnodarski krai ) has been an administrative unit ( krai ) of Russia in the foothills of the Caucasus since 1937 . It has about 5.3 million inhabitants and is one of the most developed regions in Russia. The region covers the territory of the historical Kuban region . The administrative center is the city of Krasnodar . Because of its location on the Azov and Black Seas , the region is often called the “Russian Riviera” and includes well-known health resorts such as Sochi , Novorossiysk , Anapa and Yeisk . Its agricultural importance also earned it the name “ Russia's granary ”.

The capital Krasnodar in the 19th century

The favorable natural conditions and the mild climate gave rise to human settlements here very early. Many peoples have left their mark - the ancient Greeks founded cities and colonies here. In the vicinity of Anapa ruins of the Ionian colonies Gorgippia and Hermonassa have been preserved. At times Alans , Huns , Bulgarians , Khazars , Pechenegs , Polovzians and Tatars settled in the area. In the Middle Ages , there were also colonies of Italian merchants from Genoa who had close ties with the Adygean tribes.

The first Slavic settlement arose in the 10th century after the establishment of the Russian outpost of the Kievan Rus , the Principality of Tmutarakan on the Taman Peninsula , which existed there until the Mongols invaded . The second wave of Russian settlement is connected with the suppression of the Kondrati Bulavin uprising , when his comrade Ignat Nekrasov led the surviving fighters into the area.

In the 18th century, after a series of Russo-Ottoman wars , this region came under Russian rule. In 1793 the Russian Empress Catherine II gave the Black Sea Cossacks the land on the right bank of the Kuban River, consisting of the Taman Peninsula and the surrounding area, in order to protect Russia's new southern border. In the 19th century the region became the scene of the struggle of the Caucasian mountain people for independence. During the Russian civil war it was one of the centers of the white counter-revolutionary movement.

The Krai Krasnodar existed since September 13, 1937, when as part of the Russian SFSR of the Soviet Union the Krai Azov-Black Sea in Krasnodar Krai and Rostov Oblast was divided.

In early July 2012, unusually heavy rains in the region caused severe landslides and floods, killing more than 140 people (see the flood disaster in the Krasnodar region in 2012 ). Most of the dead were in Krymsk Raion , where the Bakana River overflowed. There were other victims in the seaside resort of Gelendzhik and the port city of Novorossiysk . According to the authorities, at least 13,000 people are affected by the floods.

With a population of around 5.3 million people, the region is the most densely populated region in Russia after Moscow Oblast. Almost all peoples and religions of Russia are represented in Krasnodar, although ethnic Russians make up a clear majority of the population with around 88.3%. The numerically most significant minority are the around 282,000 Armenians, who make up 5.5% of the population. Krasnodar is the Russian region with the highest Armenian population in Russia. Another ethno-cultural peculiarity is the settlement area of ​​the Cossacks; in the northern part of the region they make up about a fifth of the population. Catherine II brought German farmers into the region, whose descendants still live here today and are one of more than 120 ethnic groups and cultures living in the region.

The Krasnodar region is the country's most attractive immigration destination after Moscow.

Sunset on the beach in Sochi

The region forms the south-western tip of Russia and lies on the Azov and Black Seas , from the Crimean peninsula it is separated by the Kerch Strait . After the collapse of the Soviet Union , it was temporarily the only region in Russia with access to the Black Sea. Bordering are the Rostov Oblast , the Stavropol Region and the Autonomous Republic of Karachay-Cherkessia . In the southeast it borders on the Republic of Abkhazia . It also includes the Adygea Republic .

Geographically, the region is divided into two parts. The mountainous south on the Black Sea is formed by the western foothills of the Caucasus , the climate there is Mediterranean. The north, through which the Kuban flows, merges into the lowlands, where the climate is more continental. The average annual rainfall varies between 400 mm in the lowlands and 3200 mm in the foothills of the Caucasus. The vegetation period is 220–240 days. 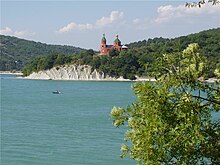 The ski resort of Krasnaya Polyana is being expanded into an exclusive winter sports resort with investments of billions. In 2014, the snow sports competitions of the 2014 Winter Olympics, which were awarded to Sochi, were held here.

The region is one of the most densely populated and economically most developed regions in Russia. Agriculture in particular is a focus of the region. The fertile black earth soils gave the Krasnodar region the name “Granary of Russia”, the northern steppe areas are almost completely cultivated, today grain and sunflowers are grown. In the south, the climatic conditions also allow the cultivation of tea, tobacco and citrus fruits. The region is also known for its wine, which is mainly grown on the coast. Such types of wine as Fanagoria , or Abrau-Djurso , which are produced here, are flagship products of Krasnodar and Russian viticulture.

The leading positions in the processing industry are taken by the food industry with over 2,200 different companies. Sugar, canned meat, fruit, vegetables and fish as well as a wide range of meat, milk, confectionery, fat, spirits and tobacco products are produced in the region. A wide range of mechanical engineering products is also manufactured in the region. These are cutting and woodworking machines, forming machines, deep well pumps, equipment for the petroleum industry, compressors as well as machines and equipment for agriculture and forestry.

In addition, the region has been the country's most important recreational area since the times of the Russian Empire. The tourism focuses on the Black Sea coast with its numerous seaside resorts. In addition, mountain and ski tourism is practiced in the foothills of the Caucasus.

The raw materials industry is just as important in the region . The largest raw materials occurring in the region are crude oil, natural gas, mercury ores, table salt, gypsum, limestone, marl, sand, gravel as well as mineral and thermal water. From the depths of the region, 1.7–1.9 million tonnes of crude oil and more than 2 billion m³ of natural gas are extracted annually. On the territory of the region there is also a large underground freshwater reservoir, the Azov-Kuban Basin . Of the 42 existing mineral springs, 17 are currently being exploited.

Streets of streets in Krasnodar

The basis of the transport system of the Krasnodar Territory is formed by the seaports, the North Caucasian Railway and the transport and road transport companies. More than 40 percent of all foreign trade goods that leave or reach Russia via a port are handled in the region's seaports. The Krasnodar Territory has eight seaports open to international traffic, including Novorossiysk , Russia's largest seaport, and the country's third-largest seaport, Tuapse , in terms of handling volume . The seaports of Sochi , Anapa and Gelendzhik are primarily used for passenger transport and tourism. However, freight goods are also handled here to a lesser extent.

The region is divided into seven urban districts and 37 Rajons (counties).

In addition to the regional administrative center of Krasnodar, there are three other large cities : the resort of Sochi , the most important Russian port on the Black Sea, Novorossiysk, and Armavir . There are a total of 26 cities and 12 urban-type settlements in the region , as well as several dozen larger stanizi and other rural settlements with more than 10,000 inhabitants.

See also : List of cities in the Krasnodar Territory