The Tver Oblast ( Russian Тверская область / Tverskaja oblast ) is an oblast in the northwest of the Central Federal District . It was formed on January 29, 1935, and 1990 in honor of the eponymous Soviet politician as Oblast Kalinin called.

The oblast lies in the Eastern European Plain and also includes the Waldai Heights . Numerous lakes, including the Seligersee (Russian озеро Селиге́р / osero Seliger), are in their area, including the upper reaches of the Volga . Almost 50% of the area is forested.

The favorable geographical location made the Principality of Tver an influential trading region even in the days of the Kievan Rus . After the creation of Saint Petersburg, the area played an important role as a stopover on the way from one capital to the other.

Kalinin Oblast was formed under the RSFSR on January 29, 1935 from parts of Moscow , West and Leningrad Oblast . In August 1944, a larger area in the west was separated to form the Velikije Luki Oblast, which existed only until 1957 . 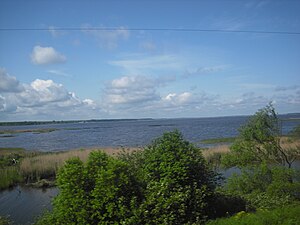 Note: the proportions refer to the total number of inhabitants. Including the group of people who did not provide any information about their ethnic affiliation (2002 13,951 and 2010 99,260 people)

The oblast is divided into 7 urban districts and 36 rajons . The city districts are made up of the five largest cities and two "closed settlements" (SATO) ( Osjorny and Solnetschny ).

The most important cities besides the administrative center of the oblast and the only major city of Tver are Rzhev and Vyshny Volochok . There are a total of 23 cities and 28 urban-type settlements in the oblast .

The governor of the oblast has been Dmitri Selenin since December 2003 . In June 2011 he was released early. Andrei Shevelyov was appointed as his acting successor . Igor Rudenja has been the incumbent governor of Tver Oblast since 2016 .

The textile industry was one of the most important branches of the economy. Peat extraction also played a role. Today the region is mainly active in the agriculture and metalworking sectors. One of the largest companies is the Tver wagon construction plant, where modern trains for Moscow and other regions are manufactured.

Energy generation also plays a major role in the area. In the city of Konakovo there is a hydropower plant that not only supplies Tver, but also partly Moscow with electricity. Another traditional branch of production is the chemical industry.