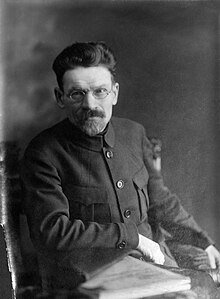 Mikhail Ivanovich Kalinin ( Russian Михаил Иванович Калинин , scientific transliteration Mikhail Ivanovič Kalinin ; * November 7th July / November 19th  1875 greg. In Verkhnyaya Troiza, Tver Governorate ; † June 3, 1946 in Moscow ) was a Soviet politician. From 1923 to 1946, as Chairman of the Presidium of the Supreme Soviet, he was the formal head of state of the Soviet Union; previously from March 1919 to December 1922 formal head of state of Soviet Russia .

MI Kalinin was the son of the farmer Ivan Kalinytsch Kalinin and his wife Maria Wassiljewna. From 1886 he attended the rural school in Jakowlewskoje until he accepted a job as a house servant in the family of the engineer and landowner Dmitri Morduchai-Boltowski in 1889 and moved to Saint Petersburg in the same year . There he worked at the Stary Arsenal plant . In April 1896 he became a lathe operator in the Putilov works . During this time he became a member of the Petersburg Combat League for the Liberation of the Working Class and founded a Marxist circle. In 1898, Mikhail Kalinin became a member of the Russian Social Democratic Labor Party (RSDLP). Due to his political activities in the Putilov works (organizing workers' demonstrations, distributing leaflets), he followed on March 3rd and 4th. July 1899 his first arrest. While in custody, after some hesitation, the administration of the detention center allowed him to study political books, including: Karl Marx 's capital. First volume . On April 12, 1900, he was informed of his release on condition that he was no longer allowed to stay in Petersburg. Kalinin was exiled to Tbilisi and placed under police supervision.

Since Kalinin continued to work for the anti-Tsarist illegal press, he and some of his companions were arrested again by the secret police on the night of December 22nd to 23rd. In February 1901 he was released for lack of evidence. He was expelled from Tbilisi to Reval . There he worked in the machine works Volta, from 1902 in the railway workshops of Reval and continued his illegal revolutionary work. In January 1903 he was arrested and taken to Kresty Prison in Saint Petersburg . In July of the same year he was repeatedly deported to Reval and supervised by the police. From exile in Powenez , Olonez Governorate, in March 1904, he returned to Verkhnyaya Troitsa in January 1905 under police supervision . In September he went to St. Petersburg illegally and worked there repeatedly in the Putilov works. During this time he was in the Narvsky City District Committee of the RSDLP elected. In 1906 he was elected a member of the Petersburg Committee of the RSDLP. In June he married Ekaterina Ivanovna Lorberg. From August 1908 he worked in a substation, later in a tram conversion plant in Moscow , where he worked actively in the Moscow Bolshevik organization of the RSDLP. He was arrested in September 1910 and deported to Verkhnyaya Troitsa two months later. It was not until the beginning of 1911 that Kalinin managed to stay in St. Petersburg, where he found a job as a lathe operator in the gun factory, but no sooner had he settled in than he was arrested and relegated to the country without further ado.

In January 1912 he was a candidate for the Central Committee of the RSDLP by the VI. Prague All-Russian Conference of the RSDLP confirmed the elected Central Committee . Within that year he was co-founder and in February 1913 editor of the party newspaper Pravda . It has been hit by a spate of seizures, fines and bans. After a public event in early January 1916, he was arrested and exiled to eastern Siberia in early 1917. The Petersburg Committee of the RSDLP (B) therefore decided that Kalinin should go illegally. In March he was co-opted into the Secretariat of the Central Committee of the SDLPR (B) and elected to the editorial board of Pravda . After the October Revolution of 1917, he became chairman of the Petrograd City Council (St. Petersburg) and in March 1918, Commissioner for Local Services of the Petrograd Soviet .

Kalinin was elected on March 23, 1919 at the 8th Party Congress of the KPR (B) as a member of the Central Committee and on March 30, 1919 as chairman of the All-Russian Central Executive Committee (GZEK) of the Soviets of the RSFSR . With that he was formally head of state of Russia. In March 1921 the 10th Party Congress elected him as a candidate for the Politburo of the Central Committee of the KPR (B). In July he became chairman of the central commission for the support of the hungry, formed by the Presidium of the All-Russian ZEK. In this function he organized food aid for the Volga region from February to March 1922. After the establishment of the Soviet Union in December 1922, he retained the post of head of state (chairman of the Central Executive Committee of the USSR ). Even after the Council Congress was renamed the Supreme Soviet of the USSR in 1937, he remained in this office (chairman of the Presidium of the Supreme Soviet ).

As a persecuted author of an authoritarian dictatorship several times during the years of tsarist Russia , Kalinin did not oppose the great waves of terror in the 1930s after Stalin's seizure of power . In 1940 his name was handwritten in block letters with the addition “For” on the submission of the shooting of prisoner-of-war Polish officers and intellectuals ( Katyn massacre ). He also signed other execution lists, but was also asked for pardons, which he did not succeed even with his own family: Kalinin's wife was arrested in October 1938 and interned until 1944.

In March 1946, after 23 years as the formal head of state of the Soviet Union, he was released from his official duties at his own request , even if he did not exercise any power of his own but only bowed to the will of Stalin. He died on June 3, 1946 in Moscow and was buried at the Kremlin wall .

From January 1, 1926 until his death he was a member of the Politburo of the CPSU .

On February 20, 1928, he was honored with the Order of the Red Banner for services to national defense and the Red Army during the civil war . In 1935 he became a member of the commission for the drafting of the new constitution of the USSR and in November, on his 60th birthday, he was awarded the Order of Lenin for outstanding revolutionary services and the significant contribution to the formation and strengthening of the Soviet state.

Some cities were named or renamed after him. Russia 's Tver Oblast was called Kalinin Oblast between 1931 and 1990 ; also the city of Kaliningrad near Moscow, founded in 1938 , which was renamed Koroljow in 1995 . The East Prussian capital Königsberg (Pr) , which was transferred to the Soviet Union in 1945 by the Potsdam Agreement, was renamed in 1946 after Mikhail Kalinin in Kaliningrad , without there being any connection between him and this city, and bears this name to this day.

In 1978 the 11th Polytechnic High School in Wismar was named after him.