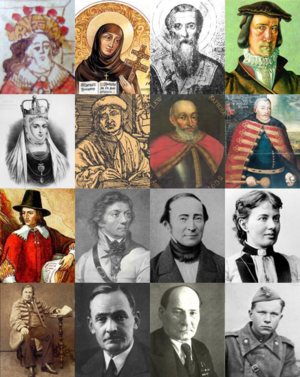 Today the Belarusians in the cities mainly speak Russian or a mixed dialect of Russian and Belarusian elements called Trassjanka (“cattle feed”). The use of the Belarusian language has declined again since 1995 after President Aljaksandr Lukashenka (re-) introduced Russian as the second official language .

According to one estimate, around 3.5 million people of Belarusian descent lived abroad at the beginning of the 21st century.

In the 18th and 19th centuries, political reasons played a role in fleeing abroad. The first noteworthy wave of migration took place in the 19th and 20th centuries, when economic reasons were in the foreground. By the beginning of the First World War , around 700,000 people emigrated to Russia and 500,000 to 600,000 to Western countries. After the end of the Second World War , around 1.5 million Belarusians were abroad as so-called " Displaced Persons ", of whom only a third returned to the Belarusian Socialist Soviet Republic .