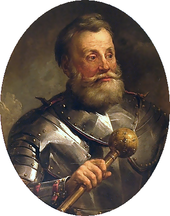 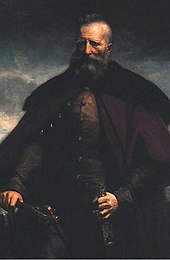 Józef Brandt : The Battle of Chocim 1621 against the Ottoman Empire, painting from 1867. Chodkiewicz can be seen on the left on the white horse in the red robe.

Jan Karol Chodkiewicz (* 1560 ; †  September 24, 1621 near Chotyn in Moldova ) was an important Polish-Lithuanian nobleman and general . In 1600 he became field hetman of Lithuania (until 1605), who was followed by the office of grand hetman of Lithuania from 1605 , and he also held various offices of starost and voivod . Chodkiewicz was one of the most talented European generals of the early 17th century.

Chodkiewicz came from a respected Lithuanian noble family . He was the son of the Grand Hetman of Lithuania, Jan Hieronimowicz Chodkiewicz, the castellan of Vilna and governor of Livonia, and the Krystyna Zborowska, daughter of a Polish magnate family from Zborow. Jan Karol attended the University of Vilnius , then toured almost all of Western Europe and fought alongside Habsburg Spain against the Republic of the Seven United Netherlands .

After his return he took part under the leadership of Jan Zamoyskis and Stanisław Żółkiewski in the campaigns in Wallachia and against the rebellious Cossacks . In 1602, the latter left him in command of the Polish army in Livonia and the continuation of the war against the Swedes . Chodkiewicz won at Dorpat and Weissenstein , for which he was Grand Hetman of Lithuania , and in 1605 defeated King Charles IX with a small team . in the battle of Kirchholm . The international fame of this victory of the Poles against the Swedes was so great that the battle was depicted in an etching by Antonio Tempesta published only shortly after the event in Rome (Bartsch No. 634). However, the internal condition of Poland prevented Chodkiewicz from taking advantage of this victory. When the army stopped fighting because of the backward pay , he continued the fight for a while with his own resources.

After he had signed an armistice with the Swedes in 1611 , he was replaced by King Sigismund III. Wasa called for the continuation of the war against Tsarist Russia , which Poland had started in support of the false Demetrius . Although Moscow had been occupied, the course of the war took a very unfavorable turn. Chodkiewicz had to leave Moscow and wandered around Russia before, in 1618, after much hardship in the Treaty of Deulino , he was granted free retreat to Poland.

Thereupon Chodkiewicz received the supreme command against the Turkish Ottomans , but he died in the middle of unfortunate fighting in 1621 near Chotyn .