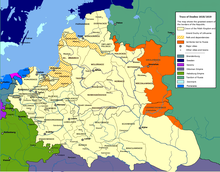 The areas that Russia lost to Poland-Lithuania with the Treaty of Deulino are marked in orange.

The Treaty of Deulino was a ceasefire agreement concluded on December 11, 1618 between Poland-Lithuania and Tsarist Russia , which ended the Polish-Russian War 1609-1618 . The contract location was Deulino, close to Moscow .

In the treaty, both sides committed themselves to a fourteen and a half year ceasefire. Russia recognized the Polish-Lithuanian rule over the area of Smolensk , Chernihiv and Novhorod-Siverskyj , from which separate voivodships were formed. The treaty marked the time of the greatest eastward expansion of the aristocratic republic . On the other hand, Russia was able to fend off Polish claims to the tsar's crown and thus maintain its sovereignty .

Poland-Lithuania lost the territories granted to it in the treaty after the Russo-Polish War 1654–1667 in the treaty of Andrussowo ; in addition, it had to cede the areas east of the Dnieper including Kiev and the surrounding area .