Tartu ( German and Swedish : Dorpat , formerly German also Dörpt; Russian Дерпт Derpt , 11th – 17th centuries, 1893–1918 Юрьев / Jurjew ) is Estonia's second largest city after the capital Tallinn and the seat of the University of Tartu . The former Hanseatic City of Livonia is located in the Tartu district . In 2024 Tartu will be one of the three European Capitals of Culture , alongside Bad Ischl in Austria and the Norwegian city ​​of Bodø .

The city of Tartu lies on both sides of the river Emajõgi ("mother river", German Embach ). To the north of the city lies the rural community of the same name, Tartu .

The first written mention under the name Tharbatas dates from the year 1030. The Grand Duke of Kiev, Yaroslav the Wise , destroyed a wooden fortress built by presumably Finno-Ugric inhabitants in 1030 and built it under the name Yuryev (after Yuri, the baptismal name of Yaroslav) a fortress. In 1224 the Estenburg Tharbatum was conquered by the Order of the Sword Brothers . It became the seat of the bishop (until 1558); in front of the castle, the Hanseatic city developed since the 13th century . In the Middle Ages , Dorpat was a link between the Hanseatic cities (especially Reval ) and the Russian cities of Pleskau (Pskow) and Novgorod . Dorpat belonged to the Russian Empire ( Livonia Gouvernement ) since 1721 .

A large fire destroyed almost the entire city center in 1775. The most striking older buildings date from the 18th and especially the 19th century. After the previous town hall building also fell victim to the fire, the current town hall was designed in the 18th century by the city architect at the time , Johann Heinrich Bartholomäus Walther from Rostock , and completed in 1789.

In 1893 the city was officially renamed Yuryev in the course of Russification ; the use of the Estonian or the German name was partially prohibited. The Russian name didn't catch on, not even in Russian . When Estonia gained independence in 1918, the name "Tartu" became official. Both Dorpat and Tartu come from the Old Estonian name Tarbata , with the possible meaning " aurochs ".

On February 2, 1920, the Peace of Dorpat between Estonia and Soviet Russia was signed in Tartu , in which the latter recognized Estonia's independence "for all time".

In the city there was the Soviet POW camp  331 for German POWs of the Second World War .

On June 23, 2016, Tartu was awarded the honorary title of “ Reformation City of Europe ” as the 62nd city by the Community of Evangelical Churches in Europe . 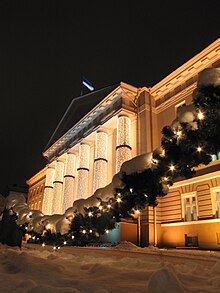 Main building of the University of Tartu at Christmas time

Tartu is a typical student town, dominated by the Dorpat University, founded in 1632 by King Gustav II Adolf , which was re-founded in 1802 by the Baltic Germans with the help of Tsar Alexander I as the only German-speaking university in the Russian Empire. The first rector of the university was Georg Friedrich Parrot , who came from Livonia and is remembered by the inscription on the “ingli sild” / “Angel's Bridge” on Domberg. The university became a mediator between Russian and German culture and was the hub of east-west relations, but at the same time also became the birthplace of the Estonian and Latvian national awakening. The Estonian national colors were originally those of the student union “ Association of Estonians Students ” at the university. During the years 1886 to 1889 an uncompromising Russification took place, in the course of which German was replaced by Russian as the teaching language, which is why the majority of the formerly over 90% German teachers moved to Germany. After 1919, the university became the national university (Estonian Eesti Vabariigi Tartu Ülikool ) of the now independent Republic of Estonia and remained the most important university in Estonia during the subsequent Soviet period (1940-1991). Today the University of Tartu is the only comprehensive university in Estonia and the mother university for Tallinn University of Technology and the University of Life Sciences.

In 2004, 18,000 students faced 135 professors and 700 other teachers. Around 440 people work in research. You can come up with 4000 scientific publications annually. There are many student associations active at the university , which, compared to Germany, have a lively influx of new members. Tartu is also home to a modern medical research facility , the Biomeedikum .

Tartu is one of six locations of the private Estonian Entrepreneurship University of Applied Sciences ( EEUAS ), an art school as well as the Tartu Raatuse Gümnaasium, a school with numerous connections to the German-speaking area, and the Tartu Waldorfgümnaasium .

There are also two armed forces teaching facilities in Tartu: the Estonian National Defense Academy and the Baltic Defense College, which is operated jointly with the other two Baltic states .

View of the town hall in autumn

The entire old town of Tartus with the town hall , the town hall square, the shopping streets and the classical university main building is worth seeing . Numerous other university buildings are scattered across the city. The medieval Johanniskirche , a Gothic brick building with art-historically significant terracotta figures , whose reconstruction was completed in 2005 after being destroyed in the Second World War, is visible from afar .

Tartu has several theaters, stages and art projects, as well as various exhibitions on the history of the city and the university. In addition to the University's Botanical Garden, there are several parks and green spaces in the old town (e.g. Toompea, Barclay Park) and along the river Embach, which crosses the city.

Sister cities of Tartu are:

There is also a “city friendship” with Greifswald , Germany (since 2006). Germany

There is a friendly or partnership relationship with other cities:

In Tartu under the will worldloppet the ski marathon Tartu Maraton 63 kilometers from Otepää to Elva aligned. In 2017 the world championship in orienteering took place in Tartu. Well-known ice hockey clubs in the city are Tartu Kalev-Välk and the Tartu Big Diamonds . The most famous football club is the JK Tammeka Tartu . The Tartu Rock basketball team takes part in the Estonian Meistriliiga as well as in the Baltic Basketball League and the EuroChallenge . The team currently plays in the first soccer league, Meistriliiga . The rugby team Tartu Lelo plays in the Estonian first rugby league.

In the 1930s the Baltic Family History Announcements were published in Dorpat . In July 2005 the 25th International Hanseatic Days ( Hanseatic Days of Modern Times ) took place in Tartu .

Numerous personalities are in contact with Tartu as professors , alumni , students and employees of the university. Also to be mentioned are:

Towns and municipalities in Tartu County