The title of this article is ambiguous. Further meanings are listed under Hämeenlinna (disambiguation) .

Hämeenlinna [ ˈhæmɛːnlinːɑ ] ( Swedish Tavastehus , more rarely Tawastehus ) is a city in southern Finland . It has been the historical center of the Häme region since the Middle Ages . In addition to the city proper, Hämeenlinna administratively covers an extensive area of ​​over 2000 km². Hämeenlinna has a total of 67,532 inhabitants (as of December 31, 2018), of which around 45,000 are in the city center.

The core city of Hämeenlinna is located on the shores of Lake Vanaja in the center of Kanta-Häme, about halfway between Helsinki (98 km south) and Tampere (75 km north), the two largest urban centers in the country.

In addition to the core city, since a large municipal merger in 2009, the administrative city area has included an extensive area totaling 2,067 km² (slightly less than Luxembourg ). This area is largely structured in a rural way with individual settlement centers in between ( taajama ). The boundaries of the administrative city area are quite curious: the area of ​​the former municipality of Kalvola is separated from Hämeenlinna by the neighboring municipality of Hattula and is in fact an exclave Because according to the Finnish municipal law only municipalities that have a common border can merge, Hattula had to cede a smaller area of ​​27 km² to form a corridor between Hämeenlinna and Kalvola.

Neighboring communities of Hämeenlinna are Padasjoki , Asikkala , Hollola and Kärkölä in the east, Janakkala and Loppi in the south, Tammela in the west, Pälkäne , Urjala , Akaa and Valkeakoski in the north and Hattula, which is almost completely surrounded by the administrative urban area of ​​Hämeenlinna. 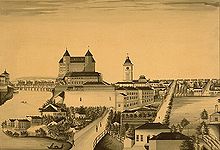 The Hämeenlinna area was inhabited as early as the Iron Age. Hämeenlinna was the end of the Ox Trail , the historic trade route from Turku to Häme. In the 13th century undertook Swedish army under Birger Jarl a crusade to Häme. To consolidate Swedish rule, Häme Castle (Finnish: Hämeen linna ) was built in the late 13th century . The castle is one of the few examples of medieval brick architecture in Finland. In 1639 the Swedish governor general Per Brahecomplete the castle and founded the town of Hämeenlinna north of the castle. In 1777, King Gustav III. the city in its current location a little further south. After a devastating city fire in 1831, Hämeenlinna was rebuilt in the Empire style . However, hardly anything of the historical building fabric has survived today. The first railway line in Finland ran from Helsinki to Hämeenlinna and opened in 1862. In 1952, some of the swimming competitions of the Helsinki Summer Olympics were held on Lake Ahvenisto on the outskirts of Hämeenlinna . 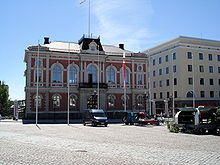 The two strongest parties in Hämeenlinna are the Social Democratic Party and the conservative-liberal rallying party . Since 2013, both parties have each provided 17 of the 59 MPs on the city council. With 10 city councilors, the True Finns follow in third place , ahead of the Center Party , which enjoys strong support especially in rural areas of Finland and has six city councilors in Hämeenlinna. The Green Bund , the Left Alliance and the Christian Democrats are each represented by three members.

Old coat of arms of Hämeenlinna

The Hämeenlinna coat of arms was designed in 1956 by the heraldist Gustaf von Numers . The blazon reads: In the red field a corrugated wall at the lower edge, which extends from one edge of the shield to the other, above two towers with pointed roofs and in between a building; all in silver, the windows are black; above it a sun with a face.

Hämeenlinna is twinned with the following cities:

The Häme Castle served until 1972 as a prison. After extensive restoration (1953–1988), visitors have been able to visit the castle since 1979. It is now a museum. There is also a prison museum and the Hämeenlinna City History Museum, which are housed in former prison buildings from the 19th century.

The town church of Hämeenlinna on the east side of the market square was built in 1792–1798 based on the model of the Pantheon in Rome . King Gustav III commissioned his architect Louis Jean Desprez to build the church after a trip to Italy. According to legend, the king thought the inhabitants of the region were so pagan that the church was given the shape of the pantheon so that it could easily be converted into a theater when not in use. The original distinctive appearance has been greatly changed by later modifications. After the town fire of 1831, the church was given a tower, and at the end of the 19th century it was enlarged with a cruciform floor plan.

About 13 km north of the city is the much older Holy Cross Church of Hattula . Like the church of Taivassalo, it belongs to the Holy Cross Churches ( Finnish Pyhän Ristin kirkko ) in Finland. 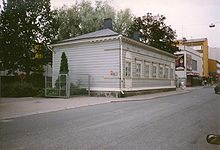 Hämeenlinna is the birthplace of the composer Jean Sibelius and the poet Paavo Cajander . The house where Sibelius was born is now a Sibelius Museum. A statue on the market square reminds of Cajander. The Palander House, one of the few remaining wooden buildings from the 19th century, can still be visited in the city center.

The city's historical museum is also located in the center. The Hämeenlinna Art Museum is on the east bank of the Vanajavesi. On the western edge of the city is the Ahveniston Moottorirata motor racing circuit , which in the past hosted international automobile and motorcycle races , with an automobile museum. The barracks were converted into the Finnish Artillery Museum. The National News Museum of Finland is in close proximity .

Cities and municipalities in Kanta-Häme

Competition venues for the 1952 Summer Olympics