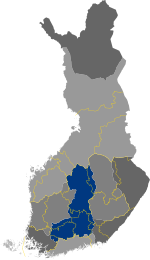 Map of the historical landscape of Häme

Häme came under Swedish rule through the Second Swedish Crusade in 1239 . At the end of the 13th century, Birger Jarl founded Häme Castle in Hämeenlinna . When the Swedish border was moved eastwards by the Treaty of Nöteborg in 1323, the castle lost its importance, but the town remained the center of the Häme region.

Under Swedish rule, Häme was combined with Uusimaa to form the province of Nyland and Tavastehus . 1831–1997 there was a province of Häme (Swedish Tavastehus according to the Swedish name of its capital Hämeenlinna). This included Kanta-Häme, most of Pirkanmaa and the western part of Päijät-Häme. During the provincial reform of 1997, Häme was divided between the newly created provinces of Southern Finland and Western Finland .