Uusimaa [ ˈuːsimɑː ] ( Swedish. Nyland [ ˈnyːland ]) is a landscape in Finland . Today's Uusimaa landscape includes most of the historical landscape of the same name , which also included the western part of Kymenlaakso . Until 1997 there was also a province (lääni) Uusimaa. After the incorporation of Ostuusimaa into Uusimaa at the beginning of 2011, the landscape is again almost congruent with the former province.

Uusimaa is located on the coast of the Gulf of Finland in the south of the country and borders the landscapes of Varsinais-Suomi in the west, Kanta-Häme and Päijät-Häme in the north and Kymenlaakso in the east. The capital of Finland, Helsinki , is located in Uusimaa and is attracting large numbers of people from the structurally weaker areas of Finland. With over 1.5 million inhabitants (around a quarter of the country's population), Uusimaa is by far the most populous landscape in Finland. The population density of 165.7 inhabitants per km² is far higher than the national average in Finland (16 inhabitants per km²) and almost as high as in Switzerland (188 inhabitants per km²). The coast of Uusimaa is traditionally settled by Finland-Swedes , even if the share of the Swedish-speaking population is only 8.5% today due to the strong influx from other parts of the country.

The gross domestic product of Uusimaa corresponded in 2010 a total of 69.3 billion euros. Finland as a whole had a GDP of 178.8 billion euros in the same year. So around 39% of GDP is generated in this small part of the country. The Helsinki region is a rapidly growing metropolitan area.

View of Raasepori and the archipelago

In the 9th century, at the time of the Vikings , a trade route ran through the region to the east. Until the 12th century, today's Uusimaa was only sporadically populated by Estonians and Haemers . The residents of Häme used it as a gateway to the coast. The Uusimaa landscape had been part of Sweden since the 12th century and the permanent settlement increased rapidly, including settlers from the Swedish Hälsingland region . The name Uusimaa / Nyland (lit. "new territory") goes back to the younger settlement in comparison to Varsinais-Suomi , the historical heartland of Finland.

After 1809, when the Swedish king had to cede Finland to the Russian tsar , the division of the country into landscapes lost its administrative importance. The Finnish capital was moved from Turku (Åbo) to Helsinki. In the period that followed, the proportion of Finnish-speaking residents in the region increased.

At the end of the 19th century, numerous artists who were of great importance for the development of Finnish national consciousness were drawn to the shores of Lake Tuusula (between Tuusula and Järvenpää ). The best known of these were: the composer Jean Sibelius , the writer Juhani Aho with his wife Venny Soldan-Brofeldt (himself a painter), the painter Pekka Halonen . The writer Aleksis Kivi also spent his last years here.

Description of the coat of arms : In the blue shield there is a golden rowing boat with a tiller between two silver wave beams .

See also: Coat of arms of the Finnish region of Uusimaa 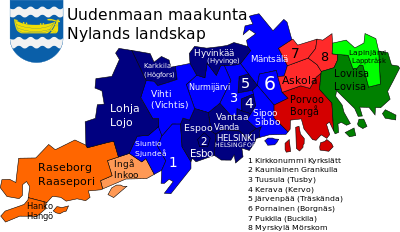 Uusimaa cities, municipalities and administrative communities (as of 2011)

Uusimaa has 26 parishes , thirteen of which are cities (in bold). The name is given in the respective majority language; in the case of bilingual communities, the name in the minority language is in brackets. Population figures as of December 31, 2018.