Österbotten [ ˈœstərˌbɔtən ] ( Swedish ), Finnish Pohjanmaa [ ˈpɔhjɑnmɑː ] (German also Ostbottnien ), is a landscape (sv. Landskap, fi. Maakunta) in Finland . Today's administrative region comprises only a very small part of the historical landscape of the same name , which also included the current regions of South Ostrobothnia , Middle Ostrobothnia , Northern Ostrobothnia , Kainuu and the southern part of Lapland ( Peräpohjola ). Today's Österbotten landscape only names the smaller, predominantly Swedish-speaking coastal strip north and south of the city of Vaasa . The area of ​​the region is 7,932 km², the population is around 180,000.

Vaasa (Swedish: Vasa) is the capital of the region with 67,552 inhabitants and the seat of a bilingual university. Here at the narrowest point of the Gulf of Bothnia , the Kvarken , it is not far to Sweden . There is a ferry connection to Umeå, 80 km away . 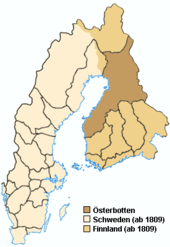 Expansion of the historical Ostrobothnia

The Swedish name Österbotten refers to the area east of the Gulf of Bothnia , analogous to Västerbotten and Norrbotten . Österbotten was already settled in the Stone Age, but the lack of archaeological finds from the late Iron Age could indicate that the area was between the 9th and 11th – 12th centuries. Century was uninhabited. The Swedish-speaking population settled on the coast of Ostrobothnia in the 13th century. The historical Österbotten landscape lasted until 1775 when it was divided into the provinces of Vaasa and Oulu .

The history of the coastal strip around Vaasa is strongly influenced by the contact with Sweden (which Finland was part of until 1809). The seafarers from central Sweden have landed here since the 14th century. In 1606 the Swedish King Charles IX founded the city of Vaasa, named after the Swedish royal family. Shipbuilding and trade (especially in tar ) played an important role.

The traditional division of Finland into landscapes was officially institutionalized in 1994. The landscape was initially called "Coastal Region Vaasa" (Vasa kustregion / Vaasan rannikkoseutu), in 1998 it was renamed Österbotten / Pohjanmaa . In doing so, the Finnish government disregarded a recommendation by the research institute responsible for maintaining the languages ​​spoken in Finland, which proposed the name form “Coastal Österbotten” (Kustösterbotten / Rannikko-Pohjanmaa) in order to confuse today's landscape with the much larger historical one Avoid Ostrobothnia.

Description: A golden wasa sheaf in red and above it the golden head of the shield with four (2; 2) red fleeing ermines .

See also : Coat of arms of the Finnish region of Ostrobothnia

The landscape of Ostrobothnia is very flat and is cut through by many rivers. The river plains are fertile and are therefore used intensively for agriculture. Because the elevation of land on the coast reduces the difference in altitude between the estuaries and the upper reaches, there is often greater flooding in spring.

Today's Österbotten landscape includes the Swedish-speaking part of the historical landscape. Today, 51.2% of the inhabitants of Ostrobothnia speak Swedish and 45.5% Finnish as their mother tongue. The boundaries between Swedish- and Finnish-speaking areas are relatively sharp in the country, while the cities on the coast are bilingual due to the influx from other parts of the country.

There are 15 municipalities in Österbotten, six of which have city status (in bold). Two communities ( Isokyrö and Laihia ) are purely Finnish-speaking. The other municipalities are bilingual; Eleven of them have Swedish and two Finnish as the majority language. In the list, the name in the majority language is given first. Population figures as of December 31, 2018.