This article describes the petrochemical mixture of substances tar. For the transepidermal / transepithelial electrical resistance see TEER (in vitro) .

Tar (of Middle Low German  ter "tar, resin" related to germanic treva , terva "tree Kienholz"; latin pix , resulting pitch ) is a brownish to black, viscous mixture of organic compounds obtained by decomposing thermal treatment ( pyrolysis of organic) Natural Products is won. Another term for tar, which goes back to the Spanish "Alquitrán" or the Arabic word al-quitrán , is Goudron (the French word for tar), for example in "Goudronanstrich".

A tar lake is the term used to describe outdated landfills for liquid industrial waste. Colloquially, asphalt lakes are sometimes referred to as "tar lakes".

Products that remain in the sump as a residue when the more volatile components ( gasoline , kerosene , heavy oil , etc.) are removed from the distillation of petroleum are called bitumen . Bitumen and tar are two distinctly different substances , even if they are both brown-black and thick.

The word, which was adopted from Low German into High German in the 16th century, goes back to Middle Low German ter [e] (→ English tar ). The residents of the coasts of North and Baltic Sea (for the tar an indispensable aid in the shipbuilding was) common word actually means "the tree Related" and belongs to Indo deru- "oak tree" (→ English. Tree ) from which the Germanic tree name suffix -đr [a] -der or -ter (for example in lilac , elder , juniper ) goes back. 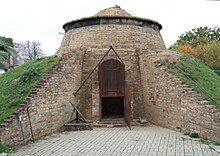 Tar stove for wood charring, side with the heating opening

The most important industrially are coal tar and wood tar , but tars are also produced from other sources:

Aromatic constituents such as naphthalene , anthracene and phenanthrene can be isolated from tar . Soot and impregnation oils for wood protection are also made from tar.

Coal tar oil is still of certain importance for industrial wood protection, e.g. B. for railway sleepers or overhead line masts . It has been further developed in recent years to improve its environmental impact.

Tools for taring roads in India

The Swiss doctor Ernest Guglielminetti developed a forerunner method for today's asphalting roads. To combat dust , he had 40 meters of road coated with hot tar for the first time on March 13, 1902 in Monaco. This procedure found worldwide distribution and Guglielminetti was nicknamed Dr. Goudron (French for "tar"). Contrary to its common usage (" taring " as a term for asphalt work on roads), tar has been banned in West Germany since 1984 and in East Germany since 1990 because of its harmful effects on public roads and paths . Instead, bitumen is used as a binding agent today . In some cases so-called carbobitumen (also pitch bitumen) was used. It is a mixture of bitumen and tar. Like pure tar, this mixed form is no longer used in Germany and must be disposed of separately.

Long-term exposure of the tar to the skin can cause skin changes which, in the worst case, can cause cancer . Tar preparations are also used in medicine as externally applicable drugs against skin diseases , as they relieve itching , kill germs and promote blood circulation .

As a building material, tar is particularly harmful to health when processed. When in contact with water, polycyclic aromatic hydrocarbons (PAH) can get into the groundwater. Therefore, the use of tar in Germany in public road construction is no longer allowed under the aspects of occupational , soil and water protection . If old layers that are suspected of containing tar are to be broken up during road construction work, rapid tests with UV light or sprays, for example with silver iodide , can be used. If the test result is positive, samples are taken for further analysis and the PAH value is determined in the laboratory in accordance with DIN ISO 18287. The result of this investigation determines the possible further use or disposal. Only slightly contaminated material may be reused in different ways, depending on the degree of exposure, for example in cold recycling . In order to finally remove the tar contaminated sites from the recycling cycle, no tar-containing recycling building materials have been permitted on federal trunk roads since January 2018 . Many countries have issued similar requirements.