The title of this article is ambiguous. For the magazine see fuel (magazine) .

Wood fire in a fireplace

A fuel is a chemical substance whose stored energy can be converted into usable energy through combustion .

Fossil fuels are mostly formed over long, often millions of years, bio- and geochemical processes. The solid fuels were subject to coalification, the enrichment of carbon in organic matter enclosed by layers of the earth. The two main steps of coalification are the transition from organic matter, which mostly consisted of higher plant species such as wood or ferns, to brown coal and the further transition from brown coal to hard coal . Lower marine animals and plants are believed to be theorigin of the oil . The entire existing fuel reserves are called resources. These are divided into presumed and proven resources. Proven resources are further subdivided into degradable and presumably non-degradable resources. If the technical depletion of a resource is assured, this resource iscalled a reserve . The energy content of solid fossil fuels is often given in so-called hard coal units (SKE).

Today, a distinction is made between renewable raw materials , which are regularly reproducible resources ( biogenic fuels such as wood , biofuels , biogas ).

Physical state and use 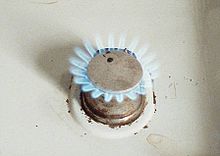 Fuels are used in all three classic physical states ( solid , liquid and gaseous ). They are used for a wide variety of purposes.

The world market price for fuels fluctuates due to many factors. Measured in terms of the unit of hard coal , the price fluctuated in the period from 1970 to 2004:

The prices of the main fuels have a significant impact on national economies. Sharply rising prices can, for example, intensify existing inflation .

The determination of the fuel requirement is necessary in order to determine order or storage quantities, to estimate the consumption costs and to make comparative calculations with other energy sources or technologies. This applies to the overall economy as well as to an individual combustion system or consumer, be it stationary or mobile.

The fuel requirement depends, among other things, on: performance of the systems, efficiency, running time, fuel type, and special factors such as regulation and control.

Most of the fuels used in Germany have to be imported. This applies primarily to liquid and gaseous fuels, since Central Europe has only few resources of its own in this area. Solid natural fuels, on the other hand, are mined in larger quantities as mineral resources in this geographical area , with the costs incurred in the production being supported by subsidies in order to be able to keep the domestic fuel competitive with the prices paid on the world market .

The provision of fuels from renewable raw materials ( biogenic fuels ) is of growing importance for the energy industry and the transport sector. In 2009, 5.5 percent of the final energy required in Germany was provided by biogenic fuels (as bioenergy ). This means they make up around two thirds of renewable energies (10.1 percent in total). The majority of bioenergy is made up of heat. The total potential of bioenergy in Germany is limited, so that only part of the energy demand can be covered by it.