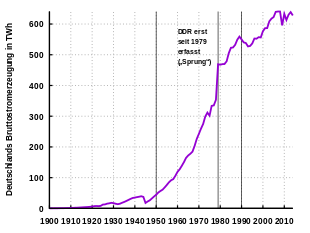 Electricity generation in Germany since 1900 in terawatt hours

When power generation (also electricity or electrical energy ), the large-scale recovery of electric power by means of power plants meant. The electrical energy made available in this way is transported to consumers via power grids .

When generating electricity, no energy is generated in the physical sense ; it is based on the conversion of another form of energy into electrical energy. (Electric) current, which is measured as a physical quantity in amps , is a colloquial term for electric energy (voltage * current * time).

Power generation from a physical perspective

In physical terms, the electrical current is the electrical charge flowing per unit of time. The energy is calculated as the current multiplied by the electrical voltage and time. Since the physical energy to the conservation of energy remains constant, the terms are current or energy generation from a physical standpoint incorrect. It is a conversion of various forms of energy, mostly the conversion of kinetic energy into electrical energy by a generator . The electrical energy is then mostly routed to the connected devices via a power grid in order to cover their electricity needs. The majority of electricity generation takes place on an industrial scale in power plants .

In general language and in the energy industry , the term electricity is used, deviating from the physical definition in the sense of electrical energy with the common units of kilowatt hours (or their multiples: megawatt hours, gigawatt hours, terawatt hours). Colloquially, one speaks of “electricity consumption” instead of energy consumption. In the energy industry sense, electricity generation means the provision of electrical energy using energetic production factors (coal, gas, water, wind ...) and non-energetic production factors (labor, emissions trading certificates ...).

Under gross electricity generation is taken to mean the total electrical energy generated such. B. a power plant or an area. In the latter case, all power generation sources are taken into account (e.g. wind , water , sun, coal, oil).

Electrical energy is the most versatile energy carrier , which can also be converted into other forms of energy with particularly low losses . It is a prerequisite for every modern industry and cannot be replaced by other energy sources without accepting high losses. Experience has shown that a power failure brings every economy to a standstill and must therefore remain as limited as possible. A high level of security of supply is therefore an important requirement for modern societies.

The main advantage of electrical energy is the possibility of covering an entire continent such as Europe with an interconnected network in which the electrical current can be distributed with low losses (see also electrical energy transport ) and the redundancy and thus the security of supply increases due to the large number of connected power plants .

The main disadvantage of electricity is the fact that - from an economic point of view - only negligible amounts of energy can be stored directly . Only through complex conversion into other forms of energy, for example by means of pumped storage power plants , can it be avoided that the generated electrical energy has to exactly match the amount consumed at all times . In a system with a high proportion of (fluctuating) renewable energies , storage power plants should take over the demand-based supply of electricity in the future .

Electrical energy is largely the only type of transmission to transport the energy of a hydropower plant , a wind turbine or a nuclear power plant in industrialized areas. The hydrogen economy has been proposed as a theoretical alternative, but this has so far only been formulated as a concept.

The triumphant advance of the electrical energy supply began after 1882 with the construction of power stations with electrical generators . Initially, they were stand-alone solutions that were independent of one another. The advantages of AC- powered power grids were recognized very quickly because they no longer depend so heavily on the operational reliability of individual power plants. In Germany, two almost independent power grids were formed:

Some power plants were equipped with separate generators and could generate electricity for both systems.

Globally, around 22,158.5 TWh of electrical energy were produced in 2011. Around two thirds of the total production comes from the combustion of fossil fuels , around 20% was generated from renewable sources and almost 12% was obtained from nuclear energy .

The gross electricity generation by energy source in Germany for the years 1990, 2000 and 2009 to 2019 is listed in the two tables below. According to preliminary figures, gross electricity generation in 2019 was 611.5 TWh. Fossil fuels provided around 267.4 TWh, renewable energies 242.6 TWh and nuclear energy 75.2 TWh. Others such as pump storage, household waste and industrial waste provided a further 26.3 TWh. Wind energy had the largest share of electricity generation with a generation of 126.4 TWh, followed by lignite (114.0 TWh), natural gas (91.3 TWh), nuclear energy (75.2 TWh) and hard coal (56.9 TWh ). According to the Federal Environment Agency, the projected carbon dioxide emissions in 2019 were 401 g / kWh. In 2017, the last year for which real values ​​are available at this point in time, it was 485 g / kWh.

The electricity mix of the individual utility companies deviates significantly from these average values.

The price of electrical energy in Germany

The electricity prices depend primarily on the amount purchased. Many large customers (e.g. industrial companies with high electricity consumption) have negotiated prices with their electricity suppliers that depend on the time of day or load (see also night electricity , variable tariffs ). Some large-scale consumers (e.g. aluminum smelters ) have production processes that they can interrupt for a while. You can agree with your electricity supplier that he may interrupt the supply in the event of peak demand ( "load shedding "); In return, they receive financial benefits.

Electricity prices for very large quantities are an indication of the generation costs. In 2007, with a minimum purchase of 70,000 MWh, they were 6.6 ct / kWh (plus 4.5 ct / kWh taxes and duties). Total price 11.1 ct / kWh. In the course of the energy transition and the sharp increase in the market share of renewable energies, many factors have changed.

Since the end of 2010 every energy supplier in Germany has had to offer variable tariffs for electrical energy so that every consumer can influence the final costs through intelligent electricity consumption .

It must be taken into account that fuel costs are not stable and that capital and maintenance costs vary within a power plant type.

In the case of biogas CHPs and wood-fired thermal power stations, 100% of the fuel costs are allocated to the electrical energy generated, whereas in reality the waste heat from these power stations is i. d. Usually shared via local heating systems. Taking into account a performance ratio (electrical: thermal) of 50:50 (with biogas CHP) or 20:80 (with wood CHP), the fuel costs are reduced to 2.5–4 ct / kWh electr. (Biogas CHP) or 1.6–2 ct / kWh electr. (Wood HKW). A similar calculation can of course also be applied to CHPs with other fuels (e.g. gas or oil).

In Europe it has long been customary for electrical energy to be traded like any other commodity. In addition to trading in electricity and balancing supply and demand , the European interconnected system also serves to improve the quality of supply: fluctuations in consumption and generation can be balanced out much better in a large electricity network than if each country had an independent electricity supply network. However, malfunctions can never be completely ruled out (see e.g. list of historical power failures ).

The price of electrical energy in Europe

Which power plant delivers electricity to whom?

In principle, the nearest power plant supplies most of the energy consumed. You can visualize it like a mountainous landscape: the power plants “push” the mountain peaks up, the consumers (cities, industrial plants) pull them down. Energy flows - just like water poured over it - down the steepest path and disappears there. In physics one calls the gradient of a scalar field . It has never been observed that water flows alternately uphill and downhill to get to a particular valley. The flow of energy is the same.

In connection with green electricity , the question arises again and again of how some electricity providers manage to obtain electricity from a specific, often distant power plant. Obtaining electricity from a distant power plant is physically not possible, unless you disconnect yourself from the public power grid and lay a separate line to the desired power plant. In this context, it is important to understand that the electricity market allows accounting separation, i.e. H. a consumer takes the same amount of energy from the interconnected grid that he bought from a power generator and that the latter feeds into the grid. The decisive factor here is not the flow of electricity, but the flow of money, i.e. to whom the consumer's money flows. Physically, the electrical energy comes predominantly from the nearest power plants, the exchange business "money for goods" is carried out in a simplified way via the " electricity lake " of a network with the selected electricity provider.

Power generation close to the consumer, for example within or near residential areas and industrial plants, is known as decentralized power generation . If electricity is distributed over a spatially limited electricity network that is not linked to the network, it is called an island network . A consumer who is independent of energy imports is called energy self-sufficient .

The different health effects of different forms of electricity generation are difficult to attribute and uncertainly to assess. The following table describes an estimate based on data from the European Union (method: ExternE). The damage to health can occur through accidents and through air pollution in normal operation. According to the table, most diseases caused by air pollution per terawatt hour generated in the European Union are caused by brown and hard coal, followed by petroleum and biomass. However, the authors do not see air pollution and normal operation as the main problems of nuclear energy, which caused comparatively few deaths, but rather long-term dangers associated with the storage of nuclear waste and damage in the event of an accident.