This article deals with perspective in a geometrical and pictorial sense; for further meanings see perspective (disambiguation) .

This article or section needs to be revised. Further details should be given on the discussion page under the heading “Emergency” . Please help to improve it , and then remove this flag.

This statement is important to the effect that a different perspective cannot be brought about by simply changing the viewing section without changing location (e.g. by using a zoom lens in photography ).

The perspective representation summarizes the possibilities of depicting three-dimensional objects on a two-dimensional surface in such a way that a spatial impression is nevertheless created. 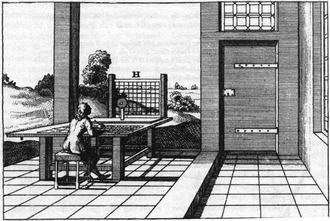 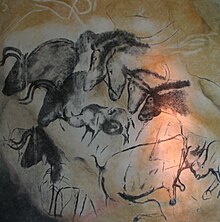 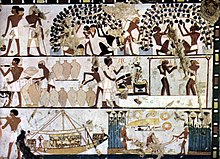 Fresco from an Egyptian tomb (around 1500 BC; depictions both in normal side and in twisted perspective occur.) 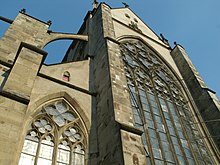 Frog's perspective of Altenberg Cathedral ; the impression of the height of the west facade is reinforced. 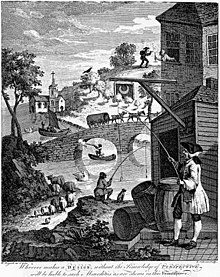 The perspective representation of spatial situations can already be found in the first steps in the Franco-Cantabrian cave paintings , for example in the Grotto of Chauvet 30,000 years ago. Perspective foreshortenings can also be found in other Upper Paleolithic caves, such as Trois Frères. Technically elaborate perspective processes were known to the Greeks, then to the Romans (see also skenography ). Wall frescoes were found in Pompeii that were supposed to continue the space into a painted garden. In the centuries that followed, this knowledge was not further developed; early Christian and medieval painting almost exclusively made use of the perspective of meaning , i.e. H. the size of the people and objects depicted was determined by their meaning in the picture, not by their spatial arrangement. The spatial effect was achieved almost exclusively through the effect of the scenery , which differentiated a foreground level from a background.

During the Renaissance , the central perspective (in connection with the camera obscura ) was (re) discovered, which roughly corresponds to seeing with one eye or a distortion-free photographic image. Painter architects such as Filippo Brunelleschi (considered the "inventor" of perspective) and Leon Battista Alberti created works that showed motifs from Christian iconography in spatially correctly constructed architectural backdrops. In the 16th century, the artists and scholars of the Renaissance acquired extensive mathematical knowledge of perspectives and projections, which also had an impact on the work of cartographers and the creation of cityscapes (especially initially in Italy). An early example of a geometrically exact and extremely detailed work of this kind is the city ​​view of Venice created by Jacopo de 'Barbari around 1500 .

Initially, the laws of the central perspective produced by our eyes were not recognized, and the representation was carried out by means of a cord that, starting from a fixed point, was stretched over a simple grid in the form of a wire grid to the objects to be depicted . The draftsman sat next to the grid and transferred the measurements into the grid of his drawing surface ("perspective constriction"). In a book from 1436 Leon Battista Alberti explained the mathematical methods with which a perspective effect can be achieved on paintings.

Albrecht Dürer published his book Underweysung der messung mit dem zirckel un richtscheyt in 1525 , which represented the first summary of the mathematical-geometric processes of central perspective and thus also forms the basis of perspective construction processes as a sub-area of descriptive geometry .

Isometric perspective in a computer game, here a study with characters from The Battle for Wesnoth

Isometric axonometry, according to DIN 5 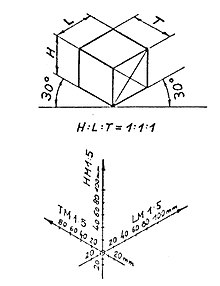 If the body to be displayed is rotated 45 ° in the top view and lifted at the rear in the side view so that its surface is less than approx. 35.26 ° (exactly ) to the base, a three-dimensional image is projected with the height (H) perpendicular , the lengths (L) and depths (T) appear at an angle of 30 ° to the baseline. The directions of width (length), height and depth expansion (in the case of a right-angled body, the directions of the edges) appear at different angles, but not at right angles to each other. All three directions are equally shortened, are related to each other like 1: 1: 1, so they have a common scale (isometry). Starting from a vertical spatial coordinate (axis, hence "axonometry"), all edges or points of a body are only constructed using the spatial coordinates that are actually at right angles to one another, perpendicular or at an angle of 30 ° to the base line. Lines or edges that do not have the direction of a spatial coordinate (e.g. the sloping gable edge of a house, the diagonals of a cube) are not shown to scale, so they cannot be constructed directly. The end points of such lines have to be determined via a detour using the spatial coordinates. It is useful to draw three line scales in the direction of the spatial coordinates in such a representation in order to make it clear that the dimensions are correct only in these directions. This spatial representation is preferable for bodies with equivalent views. It is called isometric axonometry according to DIN 5 (see fig.).

Dimetric axonometry, according to DIN 5

If the body to be displayed is rotated by only 20 ° in the top and side view, a three-dimensional image is created in which the lengths are displayed at an angle of 7 ° and the depths at an angle of 42 ° to the base line. The depths appear shortened by half compared to the heights and lengths. The spatial image is therefore two-scale (dimetric, e.g. H and L 1: 5, T 1:10). This representation is used in a front view that is particularly important compared to the other views. Taking into account the various angles and scales, the body is otherwise drawn as in isometric axonometry. To make this clear, it is essential to draw in the appropriate line scales in the form of a cross of the spatial axes. According to DIN 5, this method of representation is called Dimetric Axonometry (see Fig.).

The oblique projection is also a parallel projection . In contrast to axonometric methods, two axes can be left undistorted here, and only the third axis is shown obliquely and (possibly) shortened.

Examples are the cavalier perspective and the cabinet perspective . With the former, the elevation is undistorted and lines that run perpendicular to it are shown unabridged, with the latter, these lines are shortened by half (as shown in the picture above).

Another name for a special type of oblique projection is the military perspective. As in the cavalier perspective, there is no shortening of the third axis. The floor plan is applied undistorted and vertical routes are shown true to scale. 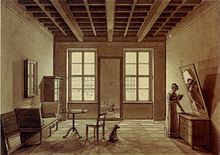 The simplest form of perspective is the central perspective . It is mainly used in architecture and for illustration. Edges parallel to space are not shown parallel to the image, but optically combine in an apparent, imaginary point, the so-called vanishing point . This vanishing point lying on the horizon line can be found via the interface that is created by extending the object edges that are parallel in reality.

Various artists such as B. MC Escher have experimented with other variants of the perspective, such. B. the cylindrical projection. With this perspective, panoramas of 180 ° and more can be realistically represented, but straight lines distort into curved curves. An example of this is Escher's lithograph Staircase I from 1951 (with “Krempeltierchen”).

This type of perspective does not lead to a complete 2-D representation, but only greatly shortens one dimension of the 3-D space. In doing so, the appearance of the objects viewed from a fixed point of view does not change, since objects lying behind are also correspondingly reduced in size with an exact relief . 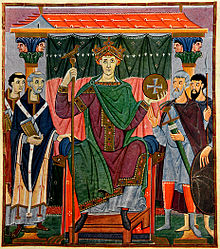 In the time before the rediscovery of the geometric perspective, the so-called meaning perspective was used in panel paintings. The size and orientation of the people shown in the picture depends on their importance: important protagonists appear large, less important ones appear smaller, even if they are spatially in front of the other person. In the picture example on the right, the quasi-isometric perspective of the footstools only relates to the respective figure - from a graphical-compositional point of view, this arrangement enables the (flat) opening of the picture space to the background. The perspective of meaning is already used in ancient Egyptian art: while the pharaoh and wife are shown in full size, slaves and courtiers are shown much smaller. In the icon painting , this type of presentation can be found as well as in the painting of the Romanesque and Gothic . The perspective of meaning can still be found today in naive painting .

A distinction must be made between aerial and color perspective .

In the aerial perspective, an impression of depth is created in that the contrasts decrease from front to back and the brightness increases from front to back. Regardless of the color, a sharp / unsharp contrast is created at the same time as the contours that become more indistinct towards the rear. 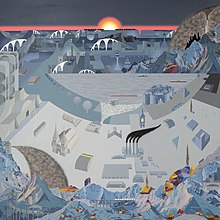 A multi-perspective describes a spatial representation using several projection centers or the combination of different perspectives that result in a space. In addition to the use of multi-perspective in still images, it is also used in digital space on moving images. By using several projection centers in moving images, distortions can be avoided. (Example: A sphere retains its circular shape, and an elliptical shape of the sphere due to the camera distortion is avoided.) The multi-perspective (in the still image) can be found in various forms of art history in various paintings. A very pronounced application of multi-perspective can be found in the works of the Swiss painter and media artist Matthias AK Zimmermann . For example, his painting “The Frozen City” shows a panoramic landscape, the space and objects of which arise from various perspectives ( central perspective , cavalier perspective , military perspective , suggestion of a fish-eye lens , etc.).

In the experiential perspective, the artists endeavor to reproduce what they see through close observation. This brings you very close to the central perspective and also recognizes that objects in the background are blurring and becoming more bluish ( color perspective ). Experience perspective stands for an approximately correct vanishing point representation before Italian artists succeeded just a few years later in constructing the central perspective geometrically perfect.