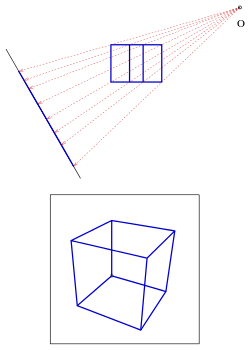 Central projection of a cube 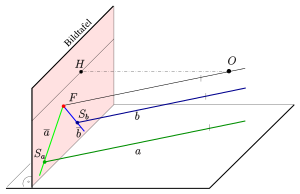 Example with a circle of vision

How a pinhole camera works

In the representational geometry, objects are always shown “in front of” the vanishing plane, i. H. The object and the illustration are on the same side of the vanishing plane. In photography , the object and the image are always on different sides of . As a result, photographic images in the camera are always "upside down", which has no effect on how they are viewed later, as the image is then simply held "the right way round".

The central projection shows objects in the edge area too large. Thus, the fields of a chess board, which is parallel to the picture board, are all shown the same size and square. In fact, the fields that are further away from the main point are also further away from the viewer and would have to be shown smaller on the picture board in order to obtain a natural image. Indeed, this effect is visible when imaging with fisheye lenses . However, the human eye corrects the resulting crooked edges when looking at large, close objects, so that the fisheye perspective does not appear natural.

Many wide-angle lenses therefore approximate the central perspective by displaying image areas close to the edge in an enlarged manner so that the straight lines lying parallel to the image table are also shown as straight as possible. Although this leads to certain distortions in the corners of the image, these are not perceived as annoying in architectural photography and cause a certain, possibly desirable drama in landscape photography, while the depiction of groups of people with a wide-angle lens often leads to unsatisfactory results. Video recordings with wide angle lead to unnatural "flowing" of the objects in the edge areas when panning. The relationships described are more noticeable for focal lengths with cones of vision than for human.

On the meaning of the main point, distance and eye point

The picture with variations of a house shows the importance of the main parameters main point, distance and eye point. If one holds the eye point and pushes the picture panel towards the eye point, i. H. if the distance is shortened, the image is merely reduced to an image similar to the first image. The angles are retained. If, on the other hand, one holds the picture plate and pushes the eye point towards the main point, i. H. Here, too, the distance is shortened, creating a picture with a new visual effect. The picture is no longer similar to the first picture. Corresponding angles are no longer the same. Shifting the main point along the straight line only causes the image to be reduced or enlarged. A shift along the eye point causes a significant change in the image.

Construction of the central projection of an object 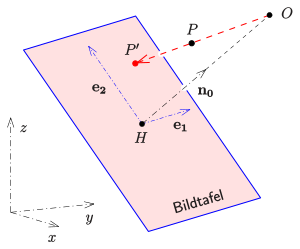 To the projection formulas: Basis of the picture table

For an analytical description of the central projection, we choose in the image table

With the distance applies: .

a) is horizontal and b) form an orthonormal system (see picture).

The central projection of an object point is carried out in two steps:

A clear description of the normal vector can be obtained by using the angular coordinates of the spherical coordinates . The angle describes (in radians) the longitude and latitude:

For the vectors we then get:

In order to establish a specific central projection,

a) the main point , b) the distance and c) the two angles are given.

So a total of 6 numbers are required. 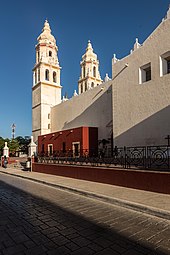 Typical applications of the central projection can be found: