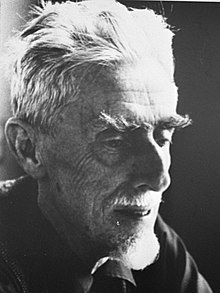 Sculpture of a star-shaped dodecahedron after a drawing by Escher; to be seen on the grounds of the University of Twente

Maurits Cornelis Escher (born June 17, 1898 in Leeuwarden , province of Friesland , † March 27, 1972 in Hilversum , province of North Holland ) was a Dutch artist and graphic artist who was best known for his depiction of impossible figures .

MC Escher was born in 1898 as the youngest of five sons of the hydraulic engineer George Arnold Escher in the Princessehof in Leeuwarden. In 1903 the family moved to Arnhem , where the young Escher completed his basic education. However, he was a pretty bad student, had to repeat two grades and, despite his talent for drawing, even got bad grades in art. F. W. van der Haagen, Escher's art teacher at secondary school, instructed him in the technique of linocut . In 1917 the family moved to Oosterbeek . Escher began studying architecture in Haarlem in 1919 , which he broke off after just a week. His teacher there, Samuel Jessurun de Mesquita , a Portuguese-born Jew, recognized the extraordinary talent and continued to teach him graphic techniques. Escher soon mastered the woodcut technique completely. Mesquita's strong personality also had a major influence on Escher's further development as a graphic designer.

Escher gained a certain popularity during the 1920s and had five exhibitions in the Netherlands and Switzerland in 1929. Up to 1937 he created mostly Mediterranean landscape paintings, including the large lithograph of a small Abruzzo village ( Castrovalva 1930). Escher had attracted particular attention in the USA .

Dislike for Italian fascism , the Eschers moved their residence to Château-d'Oex , Switzerland, in 1935 after staying in Steckborn for a while . He traveled the Adriatic , Sicily and the Riviera on a cargo ship . After a second visit to the Alhambra in 1936, Escher's theme changed and the period of metamorphoses ( day and night 1938) began. Another move to the vicinity of Brussels followed in 1937 and he increasingly experimented with surface fillings ( parquet ).

When the National Socialists invaded Brussels, the family moved again to Baarn in the Netherlands . His teacher Mesquita was abducted by the German occupiers in 1944 and murdered in the Auschwitz concentration camp . Escher was able to save at least a large part of Mesquita's work.

After the end of the war, Escher learned the mezzotint technique and from 1946 turned increasingly to perspective images ( above and below 1947). He received increasing numbers of well-paid commissions, sold many of his prints, and was a sought-after artist in the United States in 1950. His big breakthrough in Europe came in September 1954 when the Stedelijk Museum granted him a solo exhibition in Amsterdam on the occasion of a mathematicians congress held there at the same time. 1955 Escher was the knighthood of Oranje-Nassau -Ordens awarded. The last two exhibitions during his lifetime took place in 1969 in the Rheinisches Landesmuseum Bonn and in the Kunsthalle Bern .

In 1964 he fell ill, had to undergo an operation, and two years after a second operation he died in close family circle in the Rosa-Spier-Haus in Hilversum .

Escher mainly created graphic works and brought it to technical perfection in the techniques of woodcut , wood engraving and lithography . As a young man, he traveled through Italy and the Mediterranean to Portugal, creating many landscape depictions and architectural studies in a wide range of graphic styles. The motifs of the southern landscapes also formed the canon of forms of his later “non-natural” works.

Through his many journeys, Escher had a special love for the sea and shipping. Even in his old age, he gave lectures on the many natural phenomena and impressions that a ship traveler encounters in the Mediterranean.

His most famous works, which brought Escher almost the status of a pop star , deal with the representation of perspective impossibilities, optical illusions and multi-stable perceptual phenomena . You see objects or buildings that at first glance seem natural, but at second glance are completely contradicting (“ impossible figures ”).

The infinite Penrose Staircase designed by Lionel Penrose formed the basis for Escher's painting Waterfall . It shows a watercourse that zigzags away from the viewer from a water wheel in the foreground, each corner part of a total of two towers on pillars. Finally, the water runs down as a waterfall in the foreground and brushes over the water wheel from the beginning, making the construction seemingly a perpetual motion machine . Most of the water runs uphill, at the same time apparently further and further away, although the corners of the watercourse still lie alternately in one of the two towers. The image Treppauf Treppab shows a constructed in a similar fashion square, endless stairs.

The impossible crate is the starting point of the Belvedere picture . The upper and lower floors of a viewing pavilion in a northern Italian landscape are rotated by 90 ° against each other. A ladder, which stands on the floor of the basement, leans against the outer wall of the upper floor. The columns that support the building imperceptibly change sides. The paradoxical building appears completely stable at first glance.

His lithograph Drawing Hands (1948) shows two hands facing each other, drawing each other in a seemingly paradoxical process.

Relief in The Hague after Escher

Based on the metamorphoses of the ornamental art of the Moorish majolica , which Escher had studied in southern Spain , he developed in his pictures Metamorphosis I to Metamorphosis III and others a technique of regular surface filling with partly fantastic figures. He refined this by repeatedly incorporating slight variations (Vogel Fisch, 1938 or Luft und Wasser, 1938) into these surface patterns, so that the figures used are transformed and, for example, birds become fish and fill the plain.

In his work, Escher also devoted himself to topics such as Möbius strips , crystal forms , reflections , optical distortions , fractals and approaches to infinity . A self-portrait in the reflection of a glass ball is known.

He did not invent the “kaleidocycle”. These are bodies consisting of at least eight tetrahedra that can be rotated so that the viewer can see all sides of the triangle. Rather, these bodies are a continuation of his work by the American mathematician Doris Schattschneider and the artist Wallace G. Walker , the editors of the book “M. C. Escher Kaleidocycles ”. The reference to MC Escher is that the body surfaces are provided with various representations from Escher's work.

Escher also created some commercial works, such as a 58-meter-long metamorphosis mural for the main post office in The Hague, which is now located in Schiphol Airport, a column design for a school and a biscuit tin in the shape of a dodecahedron with a starfish motif in limited edition. His designs for banknotes, for which he took part in a selection process, failed because they were not forgery-proof. Designs for postage stamps were also not realized.

Escher Museum in The Hague

Escher has always remained a problem for art history . His exploration of perspective impossibilities and optical illusions differs greatly from the classic subjects of fine art and cannot be classified in any of the classic drawers. For a long time, Escher was not accepted by the art world as an artist in the classical sense.

In contrast, Escher was very much appreciated by scientists and mathematicians from an early age, as his clean, precise work approach mathematical topics in an intuitive and sensual way and illustrate problems in science. Escher was not infrequently invited to mathematics lectures, although he said of himself that he knew nothing about mathematics. He himself also gave highly frequented lectures about his work across Europe.

He also received special attention from Douglas R. Hofstadter's 1979 bestseller Gödel, Escher, Bach , which relates the work of the mathematician Kurt Gödel , the illustrations by Escher and the music of Johann Sebastian Bach .

The paradox and not infrequently mystical character of his mysterious pictures also found favor with esotericists and pop culture of the 20th century. His pictures were printed as posters and used as record covers.

2002 was the former Palace Queen Emma own Escher Museum set that shows next to his graphic work and private photos and working sketches. The latter give an impression of how the artist designed surface fills and impossible geometries.