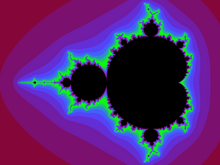 Fractal is a term coined by the mathematician Benoît Mandelbrot in 1975 ( Latin fractus ' broken ', from Latin frangere ' (to pieces -) 'break') that describes certain natural or artificial structures or geometric patterns .

These structures or patterns generally do not have an integral Hausdorff dimension , but a broken one - hence the name - and also have a high degree of scale invariance or self-similarity . This is the case, for example, when an object consists of several scaled-down copies of itself. Geometric objects of this type differ in essential respects from ordinary smooth figures.

The term fractal can be used both noun and adjectival . The field of mathematics in which fractals and their regularities are examined is called fractal geometry and extends into several other areas, such as function theory , computability theory and dynamic systems . As the name suggests, the classic concept of Euclidean geometry is expanded, which is also reflected in the broken and unnatural dimensions of many fractals. In addition to Mandelbrot, Wacław Sierpiński and Gaston Maurice Julia are among the mathematicians who give it its name. 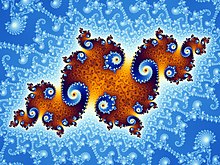 A small section from the edge of the almond bread . Here she shows resemblance to a Julia crowd

Mandelbrot used the concept of the generalized dimension according to Hausdorff and found that fractal structures usually have a non-integer dimension. It is also known as the fractal dimension . Therefore he introduced the following definition:

A fractal is a set whose Hausdorff dimension is larger than its Lebesgue cover dimension .

If a fractal consists of a certain number of reduced copies of itself and if this reduction factor is the same for all copies, then one uses the similarity dimension, which in such simple cases corresponds to the Hausdorff dimension.

But the self-similarity can only exist in the statistical sense. One then speaks of random fractals. 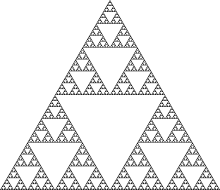 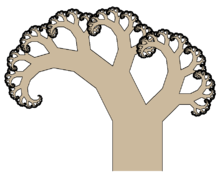 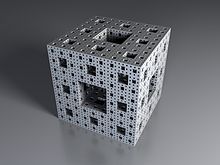 The simplest examples of self-similar objects are lines, parallelograms (including squares) and cubes, because they can be broken down into reduced copies of themselves by making cuts parallel to their sides. However, these are not fractals because their similarity dimension and their Lebesgue coverage dimension match. An example of a self-similar fractal is the Sierpinski triangle , which is made up of three copies of itself reduced to half the length of the side. It thus has the similarity dimension, while the Lebesgue coverage dimension is equal to 1.

The self-similarity does not have to be perfect, as the successful application of the methods of fractal geometry to natural structures such as trees, clouds, coastlines, etc. shows. The objects mentioned have a self-similar structure to a greater or lesser extent (a tree branch looks roughly like a scaled-down tree), but the similarity is not strict, but stochastic . In contrast to forms of Euclidean geometry , which often become flatter and therefore simpler when enlarged (e.g. a circle), more and more complex and new details can appear in fractals.

This can be seen , for example, in the Pythagoras tree . Such a tree is a fractal made up of squares arranged as defined in the Pythagorean Theorem .

Another fractal is the Newton fractal , generated using the Newton method used to calculate the zeros .

Due to their wealth of shapes and the associated aesthetic appeal, they play a role in digital art and have created the genre of fractal art . They are also used in the computer-aided simulation of structures with many shapes, such as realistic landscapes. Fractal antennas are used to receive different frequency ranges in radio technology . 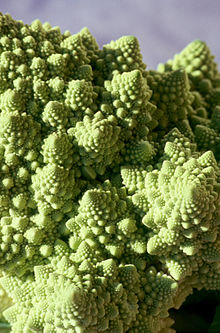 Fractals can also be found as explanatory models for chemical reactions. Systems such as the oscillators (standard example Belousov-Zhabotinsky reaction ) can on the one hand be used as a principle picture, on the other hand they can also be explained as fractals. One also finds fractal structures in crystal growth and in the formation of mixtures , e.g. B. if you put a drop of color solution in a glass of water. The Lichtenberg figure also shows a fractal structure.

The unraveling of bast can be explained by the fractal geometry of natural fiber fibrils. In particular, the flax fiber is a fractal fiber.

Fractals can be created in many different ways, but all methods involve a recursive approach:

There are ready-made programs, so-called fractal generators , with which computer users can display fractals even without knowledge of the mathematical principles and procedures.

The optional , i.e. not necessary, F is generally used as a route that is replaced by a sequence of instructions. Like the F , other capitalized letters such as R and L stand for a section of the route that is being replaced. + and - stand for a specific angle that runs clockwise or counterclockwise. The symbol | refers to a U-turn of the pencil, i.e. a turn by 180 °. If necessary, a corresponding multiple of the angle of rotation is used for this.

F is a simple line between two points. F → R means that the segment F is replaced by R. This step is necessary because it has two recursive replacements R and L that contain each other. The following is replaced as follows:

At a certain section, this replacement process must be canceled in order to get a graphic:

Here r and l each represent a fixed route.

In addition, “random fractals” also play a major role in nature. These are generated according to probabilistic rules. This can happen through growth processes, for example, a distinction between diffusion-limited growth (Witten and Sander) and "tumor growth". In the first case tree-like structures arise, in the latter case structures with a round shape, depending on the way in which the newly added particles are attached to the existing aggregates. If the fractal exponents are not constant, but e.g. B. depend on the distance from a central point of the aggregate, one speaks of so-called. Multifractals . 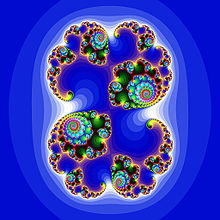