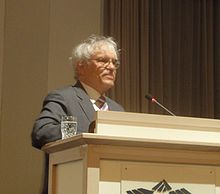 Jürgen Kriz (born December 5, 1944 in Ehrhorn ) is a German psychologist , psychotherapist and professor emeritus for psychotherapy and clinical psychology at the University of Osnabrück .

Kriz studied psychology, philosophy and education as well as astronomy and astrophysics at the Universities of Hamburg and Vienna, where he received his PhD in 1969. phil. PhD. After working as an assistant at the Institute for Advanced Studies (Vienna) , he was a lecturer at the University of Hamburg and from 1972 to 1974 professor of statistics at the University of Bielefeld , Faculty of Sociology . From 1974 to 1999 he held the chair for empirical social research, statistics and philosophy of science at the University of Osnabrück. In 1980 he moved to the department of psychology, where he took over the professorship for psychotherapy and clinical psychology (overlapping with the professorship in methods until 1999). In 1999 he received his license to practice medicine as a psychotherapist. Jürgen Kriz has been an emeritus since 2010.

Kriz held visiting professorships in Vienna, Zurich, Berlin, Riga, Moscow and the USA - a. a. In 2003 the " Paul Lazarsfeld Guest Professorship" at the University of Vienna . From 1994 to 1996 he was head of the international expert committee on knowledge and action at the Vienna International Conference on the Future (WIZK); since 2000 he has been a member of the Scientific Advisory Board of the Society for Person-Centered Psychotherapy and Counseling (GwG); from 2004 to 2008 he was a member of the Scientific Advisory Board for Psychotherapy (WBP).

From 1994 to 2017, Kriz was co-editor of the international multidisciplinary journal Gestalt Theory . In Springer-Verlag he publishes the textbook series Basic Knowledge Psychology with around 30 volumes so far (as of 2020).

Kriz wrote more than 300 scientific publications, including over 20 monographs and around 100 book chapters. His main focus is on statistics and research methodology (especially the criticism of science) as well as the development of a comprehensive approach called person-centered systems theory .

After textbooks on statistics, data processing, research methods and philosophy of science, Kriz dealt primarily with the limits of formal models with regard to their informative value and application in research and work practice. In overarching works such as Methodenkritik empirischer Sozialforschung (1981) and Facts and Artefacts in Social Science (1988), he argued that invalid or even nonsensical research results are not so much the result of incorrect calculations or insufficient implementation of the formal steps. Rather, they are due to the fact that the model requirements and boundary conditions are not sufficiently taken into account. In many contributions Kriz devoted himself specifically to the criticism of an inadequate application of the experimental paradigm in psychotherapy research and an improper interpretation of randomized controlled design (RCT research). Psychotherapy research - according to his criticism - mostly neither does justice to the fact of non-linear courses in development and change processes nor does it take into account the human being as a subject. The conditions for research are not only determined by manualized actions or interventions, but also significantly influenced by the assignments of meanings and interpretations made by the patients as subjects. This makes the so-called "independent variables" in experimental designs dependent on the interpretations. The basic scheme of the experiment and the RCT logic thus become inadequate, which means that the RCT logic with its "independent" intervention variables only fits if the person is treated as an object that cannot be interpreted instead of a subject.

In addition to this fundamental misalignment of RCT psychotherapy research, Kriz has criticized numerous other problems due to questionable - mostly undiscussed - assumptions.

Human development processes and changes through therapy, counseling or coaching are characterized by non-linear processes in which many aspects interact. Kriz tries to take this into account with the person-centered system theory, which addresses the non-linear interactions on (at least) four process levels: In addition to the interplay of (1) psychological and (2) interpersonal processes, which are taken into account in most approaches to psychotherapy and counseling , the influences of (3) somatic (and here in particular evolutionary) and (4) cultural processes on this event are also included. Furthermore, the complementarity between "objective" perspectives of scientists, consultants etc. and the perspectives of those affected as subjects plays an important role in Kriz's approach. Kriz points out that, for example, the "objective" findings of the diagnosis are often only slightly related to the sensitivities of the subjects. Many concepts such as "stress" or "resources" are often described on the basis of "objective" factors, while other aspects are relevant for the experience and actions of the subject.

In Subject und Lebenswelt (2017), in which Kriz summarizes three decades of work on person-centered systems theory, the interaction of the four process levels and the complementarity of "objective" and subjective perspectives are fundamentally presented. Kriz shows that the distinction between "objective" description - from the 3rd person perspective - and subjective experience - from the 1st person perspective - is a purely academic-analytical figure of thought that contributes little to the understanding of human reality. Rather, both perspectives are interlinked. Because in order to be able to understand the very own "inner" impulses (of the organism), man has to apply the cultural tools (especially the language) of his social community to himself. For example, he must understand the immediate physical sensation of physiological processes as "longing" or "sadness" or "despair" and thus symbolize it. It's not just about terms or the semantics and syntax of language. Rather, the metaphors, principles of explanation and understanding, narratives, action concepts, etc. of a culture are automatically conveyed with the language.

Formally, the person-centered system theory is based on the self-organization paradigm within the framework of the theory of non-linear dynamic systems - especially synergetics . After more formal works such as Chaos and Structure (1992) or Systems Theory for Psychotherapists, Psychologists and Medicines (1999), Kriz has recently mostly dispensed with the explicit formal derivation of the fundamentals in order to appeal to a larger audience with different requirements.