The province of Friesland (also in Dutch , English ; but officially West Frisian Fryslân ) is one of the twelve Dutch provinces . All inhabited West Frisian islands belong to it with the exception of Texel . With them, Friesland is the second northernmost province of the Netherlands, located between the IJsselmeer in the west and the province of Groningen in the east. The capital is Leeuwarden ( West Frisian Ljouwert ).

The province is the only one in which, in addition to Dutch , another language is the official language, the closely related Frisian ( West Frisian ). However, almost all residents speak Dutch (also), and most of the texts are written in Dutch. Although there is no significant independence movement, Friesland has a stronger regional awareness than other provinces.

Friesland is known in the Netherlands for ice skating, which brings about the Elfstedentocht race in particularly severe winters . The race is named after the historical eleven cities of Friesland, which are not necessarily the most populous places in the modern province. In Friesland there are also some of their own sports and mudflat hiking is practiced.

In the German-speaking world, the name Westfriesland is common and correct for the province of Friesland . The name is an analogous formation to the names of the German regions of North Friesland and East Friesland . In international contact, however, this designation can lead to misunderstandings, as " West Friesland " in the Netherlands is the name for the region of the same name in the province of North Holland . In order to avoid this imprecise designation and to avoid confusion with the German district of Friesland or the Friesland region as a whole, the province is also named Westerlauwers Friesland or west (er) lauwersche Friesland after its already historically significant location west of the Lauwers river .

It Heitelân ( German for  the fatherland ) is another common slang term for the province. It is often used when the strong bond to the Frisian homeland is to be expressed. The name is also increasingly used among the national Frisians .

In 1996 the government in The Hague allowed the free choice of place names in Friesland. After that, the municipalities and the province could decide independently whether they wanted to use a Dutch or a Frisian name. The province of Friesland was then renamed Provinsje Fryslân on January 1, 1997 . So far, 11 out of 31 Frisian municipalities have followed this example. There are individual efforts to make Friesland an independent state under the Dutch crown. Overall, however, such efforts are rather weak.

The province of Fryslân lies on the IJsselmeer in the west and on the North Sea coast in the north of the Netherlands . It borders the provinces of Groningen and Drenthe to the east and the provinces of Overijssel and Flevoland to the south .

The highest point in the province of Fryslân at 45 m above NAP is on the North Sea island of Vlieland ( West Frisian Flylân ). On the mainland, the highest point is 27 m high, the deepest - 2 m.

The next provincial election will take place on March 22, 2023.Template: future / in 2 years

At the head of the province is the king's commissioner . Since March 2017 this has been the legal liberal Arno Brok . The college van Gedeputeerde Staten , i.e. the government, has been formed by a coalition of CDA , PvdA , VVD and FNP since 2019 . 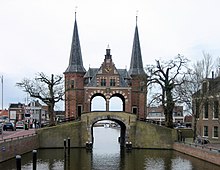 See also : List of former municipalities in the province of Fryslân

An early culture with settlements on terpenes ( terps ) emerged in Friesland around 400 to 200 BC. The Romans called the inhabitants Frisii . In the 8th century Friesland became part of the Franconian Empire and it was Christianized. During the Middle Ages , Friesland was gradually incorporated by the Counts of Holland .

After a period of independence in the 15th century, Friesland returned to Holland and came under the rule of the Habsburgs . Since 1581 it had a relatively independent status within the Republic of the Seven United Provinces . As one of the few provinces by the sea, it had its own Admiralty of Friesland . In 1795 Friesland became part of the Batavian Republic , in 1806 of the Napoleonic Kingdom of Holland and in 1810 of the French Empire . Friesland has been a province of the newly established Kingdom of the Netherlands since 1815.

In 2015, the regional gross domestic product per inhabitant, expressed in purchasing power standards , was 90% of the EU-28 average . In 2017 the unemployment rate was 5.5%.

Friesland is the "home of origin" of one of the oldest horse breeds in the world, the so-called Friesian horse , also known as "Friesian".

The spread of languages ​​and dialects in the north-eastern Netherlands.

A separate language within the Frisian language group - and not a dialect of Dutch - is West Frisian (also called Westerlauwerssches Frisian), which in Fryslân is called Frysk and is recognized here as the official language alongside the standard Dutch language. Of the approximately 650,000 inhabitants of Fryslân, around 450,000 speak Frisian, around 360,000 of them as their mother tongue. There are different dialects, but also a standardized variant of the language. Of the four Wadden islands of Fryslâns, only Terschelling ( West Frisian Skylge ) and Schiermonnikoog ( West Frisian Skiermûntseach ) are Frisian- speaking . West Frisian is by far the most vital branch of the Frisian language family. The varieties of North and Sater Frisian still spoken in Germany , on the other hand, are acutely threatened with extinction.

Every three years the administration of the province of Friesland in the Netherlands awards the Gysbert Japicxpriis ( German  Gysbert Japicx Prize ), a Frisian literary prize named after the Frisian writer Gysbert Japicx , which is endowed with a sum of 5,000 euros. The provincial administration follows the recommendations of an expert committee and regularly awards prose and poetry works.

In the Frisian cities, a dialect called Stadt Frisian is often spoken, which consists of Dutch vocabulary and Frisian grammar. Dutch-Frisian mixed dialects are also the Bildts in the municipality of Het Bildt and the Midsland on the island of Terschelling . The island of Ameland ( West Frisian It Amelân ) has its own Frisian-Dutch language, Amelânsk or Amelands ( German  “Ameländisch” ). This language was previously promoted by the Lords of Ameland, the Cammingha family, and modified from Frisian.

The various mixed dialects are assessed differently by linguists and partly assigned to the Dutch dialects , partly treated as a separate group.

Lower Saxon dialects are traditionally spoken in some areas of the province of Friesland . In the Stellingwerven is Stellingwerfs common. The dialects widespread in the Kollumerland are either assigned to the Gronings or combined with the dialects spoken in the neighboring Groningerland as Westerkwartiers . The almost extinct Kollumerpompster is considered to be a Lower Saxon, but very strongly Frisian-influenced transition dialect to Frisian.

The standard Dutch language has official status in the province, as in the rest of the Netherlands, and is mastered throughout. For many people in the province, Dutch is now their first and mother tongue. Traditionally, a Dutch dialect was only spoken on the North Sea island of Vlieland , but it is considered extinct.

The Frisian population also has its own traditions in sport , which are cherished and cultivated.

The comedy film New Kids Nitro from 2011 largely deals with the province of Friesland.