The title of this article is ambiguous. Further meanings are listed under Tournai (disambiguation) .

Doornick is a redirect to this article. For people with this name, see Nagel-Doornick .
lb le ls lh

Tournai ( Dutch Doornik , German obsolete Dornick ) is a town on the Escaut River (Dutch: Schelde ) in the province of Hainaut (Dutch Henegouwen , French Hainaut ) in Wallonia , the predominantly French-speaking part of Belgium . On January 1, 2019, it had 69,233 inhabitants, according to the information in the National Register. The city is located about 85 km southwest of Brussels . With an area of ​​over 213 km², it is the largest municipality in Belgium.

Since the merger of Belgian municipalities in 1977, the municipality of Tournai has consisted of 30 entities or sections. In addition to the old town of Tournai, there are 29 villages. Before 1977, all of these sections were independent parishes. As a result of the merger, Tournai has become the largest municipality in Belgium in terms of area, with an area of ​​213.75 km². The commune is divided into five districts: Tournai, Froidmont, Gaurain, Kain and Templeuve. Around 30,000 of the approximately 70,000 inhabitants live in the core city of Tournai.

Sections of the Tournai Municipality 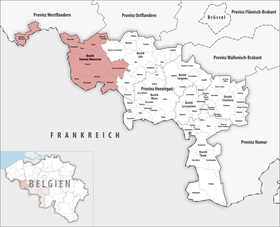 Municipalities in the Arrondissement of Tournai-Mouscron

Tournai is part of the Tournai-Mouscron arrondissement in the province of Hainaut . This in turn belongs to the Walloon Region and the French Community of Belgium . Tournai is francophone .

In the 2018 local elections, the Parti Socialiste achieved 35.92 percent, the liberal Mouvement Réformateur 22.67 percent, the green Ecolo 17.77 percent, the Ensemble! (German: “Together!”), successor to the Christian-social Center Démocrate Humaniste , 14.02 percent and the left-wing Parti du Travail de Belgique 5.60 percent. This meant 16 seats for the PS, 10 seats for the MR, 7 seats for Ecolo, 5 seats for Ensemble in the local council! and a seat for the PTB. The socialists and liberals had suffered significant losses compared to the last local election, which broke up the ruling coalition of these two parties until 2018. The election winner was Ecolo with strong gains. A coalition of PS and Ecolo was formed, and Paul-Olivier Delannois from the Socialist Party was elected mayor.

Tournai is the oldest city in Belgium after Tongeren . It became the Merovingian seat of power under Merowech in the middle of the 5th century , from where Childerich I also acted. After 487 Clovis I moved the royal seat to Soissons . The city has belonged to the Frankish Empire since then and became part of the County of Flanders in the 10th century .

After the battle of Guinegate , the city was besieged by the English and had to surrender on September 24, 1513. The diocese of Tournai thus passed into the hands of the later English cardinal Thomas Wolsey , who returned it to the French King Francis I in 1516 for an annual fee of 12,000 livres .

In 1653 the grave of Salfranken Childerich was discovered in Tournai , whose grave goods were partially stolen in 1831. The other part is in the Bibliothèque nationale de France in Paris.

In 1709 Tournai was captured by the troops of the Duke of Marlborough and Prince Eugene of Savoy during the War of the Spanish Succession .

In 1745 the city was besieged and conquered by French troops under the Maréchal de Saxe during the War of the Austrian Succession , and the citadel was razed to the ground. Tournai was in French hands until the Peace of Aachen (1748) and was then returned.

During the First World War , Tournai was a railway junction and seat of the Army Group Leader , Crown Prince Rupprecht of Bavaria, in the Bishop's Palace, a predestined stage and the target of frequent air raids.

In June 1940 Tournai (and the whole of northern France) were occupied by the Wehrmacht as part of the western campaign . After the German Wehrmacht surrendered in Paris on August 26, 1944 , the Allied troops advanced very quickly for some time. On August 31, 1944, Brigadier General Truman C. Thorson suggested moving towards Tournai to prepare the Mons pocket. General Omar N. Bradley ordered General Hodges to move his troops towards Tournai. US troops arrived there on the evening of September 2; on the way they found almost no resistance.

The medieval old town of Tournai is well preserved. Particularly worth seeing are the Notre-Dame Cathedral (built 1110 to 1325) and the oldest Belgian belfry , built around 1200, both of which are UNESCO World Heritage Sites . Also worth seeing are the Gothic Cloth Hall and the Pont des Trous , a bridge over the Escaut as part of the medieval fortifications. The bridge arches of the Pont des Trous were, however, torn down after long political disputes against considerable resistance in August 2019 in order to enable the passage of larger ships on the river. There are only the towers on both sides of the Escaut. A restoration of the bridge is planned, but it is not yet clear in what form and when. The 11th century Benedictine Abbey of St. Martin was secularized in 1797 and now houses the town hall. The building has a neoclassical facade from the 18th century and is embedded in a park. The Romanesque crypt from the 12th century is still preserved . The Musée des Beaux-Arts , designed by Victor Horta , opened in 1928 and houses a collection of paintings and sculptures.

Tournai was once a major center of the textile trade and the production of high-quality textiles (in Tournai, the main factory is Millefleurs -Wandteppiche suspected). The so-called Tournai carpet (also known as the Tournay carpet) is famous. The textile industry still has a certain importance today (2008).

From 1911 to 1996 the Binche – Tournai – Binche cycling race was held with interruptions . It has been held again since 2010 (in the UCI category 1.1.): It bears the name 'Mémorial Frank Vandenbroucke ' in memory of the Belgian cyclist who died in 2009 .

The geological stage Tournaisium is named after the city of Tournai , the lowest stage of the Mississippium in the Carboniferous . It covers the period from 359 to 347 million years ago.