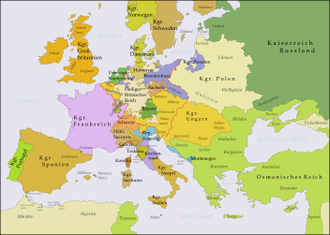 Europe after the Peace of Aachen in 1748 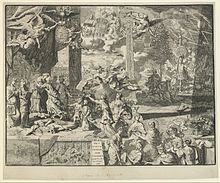 Allegory of the Peace of Aachen 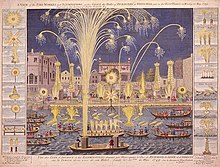 The Peace of Aachen was an international treaty concluded on October 18, 1748 , which ended the War of the Austrian Succession . This was preceded by a congress that began on April 24, 1748 in the free imperial city of Aachen .

Nothing was stipulated regarding the trade war between England and France in the West Indies, Africa and India; the peace treaty was therefore no basis for a lasting peace. There was general outrage in France for viewing the peace treaty as an unnecessary abandonment of benefits, particularly because of the Austrian Netherlands , which was conquered mainly because of the brilliant strategy of Marshal Moritz Graf von Sachsen . In Paris , the phrase "bête comme la paix" ("stupid as peace") came up. The Aachen Peace brought stability in Italy . The new territorial determinations and the inauguration of the peaceful Ferdinand VI. of Spain allowed the Aachen determinations to endure until the outbreak of the First Coalition War in 1792.

In April 1749, to celebrate peace, the fireworks music that the British King George II had commissioned from George Frideric Handel was performed in London's Green Park .