Flag of the Duchy of Parma 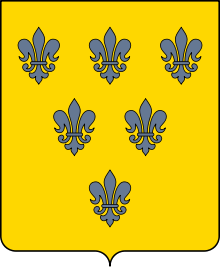 Coat of arms of the House of Farnese

The Duchy of Parma was a territory in present-day Italy that existed from 1545 to 1860 .

It was split off from the Duchy of Milan in 1545 and replaced by Pope Paul III. originally given as a fief to his illegitimate son Pier Luigi Farnese . However, when he took possession of the fief in 1547, which at that time was limited to the city of Parma , he was murdered by the city nobility, whereupon imperial troops under Ferrante I. Gonzaga forced the city to be handed over to his son Ottavio Farnese . He also received Piacenza as a fiefdom, which is why the resulting domain is imprecisely named Duchy of Parma and Piacenza .

The Farnese ruled the Duchy through to its extinction in 1731. Then it fell into Sekundogenitur to the Spanish Bourbons under Charles III. , who in the course of the Vienna Preliminary Peace already in 1735 with Emperor Karl VI. had to exchange for the Kingdom of the Two Sicilies . The Habsburgs only ruled until 1748; the small duchy fell to Philip of Parma from the house of the Bourbons , who thus became the progenitor of the Bourbon-Parma branch .

When Duke Ferdinand died in 1802, the duchy was occupied by French troops (see Subalpine Republic ). After it was annexed by France in 1808 and placed under the Taro Department , the duchy was restored in 1814 with Marie-Louise of Austria as ruler. She ruled until her death in 1847, after which the House of Bourbon-Parma came back to the throne. In 1854, Duchess Louise Marie of Bourbon became regent of Parmas. In 1859, due to the Sardinian War , she fled with her children, first to Switzerland , and later to Austria . In 1860 Parma became part of the Kingdom of Sardinia . The title "Duke of Parma" continued to be carried by the male descendants.

Commons : Dukes of Parma and Piacenza  - Collection of images, videos and audio files