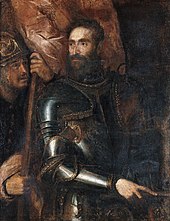 After Pier Luigi's father was elected Pope in 1534, he appointed him Gonfaloniere of the Church in 1537 , made him Duke of Castro and generously endowed him with estates. Pier Luigi Farnese subsequently acted as a mediator between Pope and Emperor Charles V , who therefore appointed him Margrave of Novara in 1538 . Another proof of papal nepotism was the Duchy of Parma and Piacenza , which - despite political disputes with his father - was hereditary in 1545, whereupon he immediately passed the Duchy of Castro on to his third son Orazio to look after him (the eldest, Alessandro Farnese , at the age of 14, became cardinal in 1534, the year his grandfather was elected papal, the second, Ottavio Farnese , was to be the heir of Parma and Piacenza).

Pier Luigi's attempt to take possession of the Duchy of Parma ended with his assassination by the regional nobility in Piacenza, which was occupied by imperial troops two days after the act. He was succeeded as planned by his second son Ottavio, who seamlessly took over the fight for the duchy.

Pier Luigi Farnese married Gerolama Orsini († 1570) in 1519 , daughter of Luigi Orsini , with whom he had at least five children: