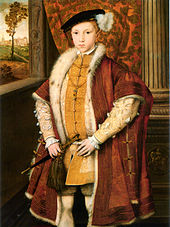 Henry VIII dies in the Palace of Whitehall in London on January 28th . Edward VI succeeds him . , his nine - year - old son by his marriage to Jane Seymour , to the throne of England and Ireland . The accession to the throne was unproblematic, since Henry expressly designated him as his successor in his last will of December 30, 1546. In addition, a ten-member throne council was appointed to take care of government business during Edward's minority. The council consists mostly of people who have already gained influence under the old king. The Council's principal members are Edward Seymour, Earl of Hertford , a brother of the late Jane Seymour, and John Dudley, Viscount Lisle and Sir William Paget, 1st Baron Paget .

The members of the council are for the most part reformers in the sense of an independent English state church . Catholics Stephen Gardiner , Bishop of Winchester, Thomas Howard, 3rd Duke of Norfolk and Thomas Thirlby are barred from the council. The members of the Council ask the new King Edward VI. now for a confirmation of the appointment, in order to take the wind out of the sails of those who doubted the legality of King Henry's last will.

On March 13 Edward VI confirms. the members of the Council except Lord Chancellor Thomas Wriothesley, 1st Earl of Southampton . King Edward makes his uncle Edward Seymour Duke of Somerset and makes him Lord Protector . Seymour is granted the right to change the Council at his own discretion. He thus becomes the actual ruler in England. The Archbishop of Canterbury, Thomas Cranmer , also exerted a strong influence on the young king.

Giovanni Luigi de Fieschi , with others, undertakes an uprising against the rule of the Genoese Doge Andrea Doria in Genoa on 2 January . Fiesco's conspiracy fails, and the rebel drowns in the harbor after falling into the water in heavy armour. 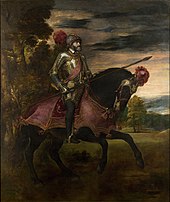 Emperor Charles V after the Battle of Mühlberg , painting by Titian

Territorial changes in Saxony and Thuringia after the Wittenberg capitulation

Schmalkaldic federal thaler 1546, on the left the Saxon side with the portrait of Elector Johann Friedrich the Magnanimous , on the right the Hessian side with Philip of Hesse

The possessions of the House of Habsburg 1547 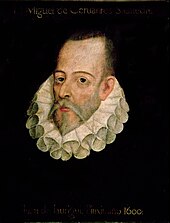 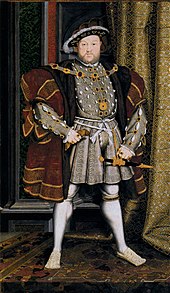