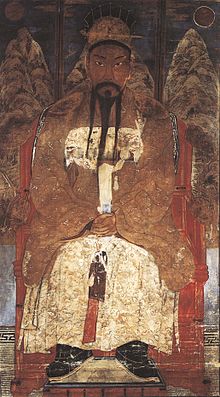 Dangun was the grandson of the Lord of Heaven Hwanin ( Kor. 환인 , 桓 因 ), a name that is already mentioned in ancient Buddhist texts from India.

Hwanin had a son, Hwanung , who wanted to live on earth. Hwanin chose Mount Taebaek as the place of residence for his son and sent him to earth with 3,000 followers. Hwanung founded the city of Sinsi ( 신시 , 神 市 ), the city of God , on the summit . Together with his ministers, Hwanung gave the people laws, morals, culture, medicine and agriculture.

A tiger and a bear asked Hwanung to transform them into humans. Hwanung gave them garlic and mugwort (the first gimchi ) and ordered them to eat them for a hundred days, avoiding sunlight during that time. The tiger gave up shortly afterwards, while the bear stayed and was turned into a woman. The woman, her name was Ung-nyeo ( 웅녀 , 熊 女 ; eng . Bear woman ), turned out to be very grateful, but she had no husband and was sad because she had no children. Hwanung was touched by her prayers and took her as his wife. Their son was called Dangun Wanggeom .

According to popular belief in Korea, Dangun climbed in 2333 BC. The throne, founded the city of Pyongyang and the kingdom of Go-Joseon. The date refers to an entry in the Dongguk Tonggam , which names the 25th year of the reign of the Chinese Emperor Yao . This contradicts the representations in the Sejong Sillok and Il-yeon's Samguk Yusa , which indicate the 1st year and 50th year of Yao's reign, respectively.

The mythical founding of Korea by Dangun is celebrated today in South Korea with the holiday Gaecheonjeol .

The geographical location of Mount Taebaek is controversial. The following three mountains are cited by Koreans as the possible birthplace of their civilization:

In the North Korean district of Kangdong, which is part of the urban area of Pyongyang , the reconstruction of the alleged tomb of Dangun was completed in 1994. This is a complex of 45 hectares, in the center of which is a white stone pyramid with the alleged burial chamber of Dangun and his wife.

From 1945 to 1961, the Gregorian calendar with Dangun years was officially used in South Korea , referred to as Dangi ( 단기 ) 4278 to 4294. Occasionally, this count is still used today. The dangi count was also used for the Korean lunisolar calendar used before 1910 .