The title of this article is ambiguous. Further meanings are listed under mugwort (disambiguation) .

The Common mugwort ( Artemisia vulgaris ), also spice mugwort or Common mugwort called, is a plant of the genus Artemisia in the family of the daisy family (Asteraceae, Compositae outdated). Mugwort pollen is a common cause of allergic reactions . 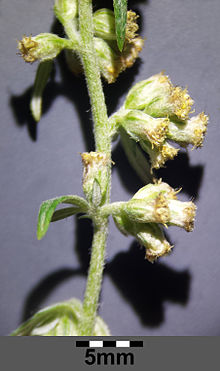 The perennial herbaceous plant reaches stature heights of 60 centimeters up to 2 meters. The mostly upright stems are at most sparsely hairy. The pinnate leaves are coarse, usually 2.5 to 5 (rarely up to 10) centimeters long and 2 to 3 centimeters wide. The upper side of the leaf is green, the underside tomentose.

In terminal, panicle inflorescences , many cup-shaped partial inflorescences stand together. The inconspicuous, whitish-gray, yellowish or red-brown flower heads are 2.5 to 3.8 millimeters in height and 2 to 3 millimeters in diameter. The flower heads contain only fertile , radially symmetrical tubular flowers , seven to ten female flowers on the outside and eight to 20 hermaphrodite inside (rarely five to). The egg-shaped bracts are hairy tomentose. The yellowish to reddish-brown tubular flowers are 1 to 3 millimeters long.

The smooth, dark brown to black, ellipsoidal achenes are 0.5 to 1 millimeter long and 0.1 to 0.3 millimeters wide.

The flowering period extends from July to September. The fruit ripening begins in September.

The leaves of the highly toxic blue monkshood show a certain similarity. In contrast to the mugwort leaves, however, they are not tomentose on the underside. The mugwort (Ambrosia artemisiifolia) is also similar to mugwort.

The mugwort is a persistent, short-lived hemicryptophyte , it has roots 60 to 155 mm deep.

The flowers are subject to wind pollination , pollen is released in the morning between 6 and 11 a.m. it blooms in the first year of life.

The fruits are only 1.5 millimeters long and 0.1 mg heavy, bald achenes without pappus , their bracts form a capsule that opens when it is dry and is scattered by the wind. In addition, there is a processing spread z. B. by small birds. The whole plant can produce up to 500,000 fruits per year. The seeds are long-lasting light germs .

The flowering mugwort is a major cause of hay fever .

The mugwort is a typical " root crop - weed " and probably spread together with the Neolithic agriculture. It has been found in Central Europe since band ceramics . The original distribution of mugwort can no longer be determined today after it was spread by humans over almost all northern regions of the world.

Mugwort is common in all federal states of Austria and Germany. In the Allgäu Alps, it rises on the Haldenwanger Alpe near the Geißhorn in Bavaria to an altitude of 1650 meters.

The cultivation for the extraction of oil for the perfume industry takes place in North Africa ( Algeria , Morocco ) and southern Europe ( France , Balkans ).

The most important ingredients in mugwort herb are the sesquiterpene lactones , which are responsible for the bitter taste, and up to 0.2% complex essential oil . Mugwort contains the following classes / substances:

The harvest time ranges from July to October. As long as the flower heads are still closed, cut off the upper tips of the shoots. As soon as these open, the leaves become bitter and are no longer suitable for seasoning. The harvest time for the root is late autumn .

Mugwort is one of the traditional Grutbier herbs and is used as spice plant for fat, used heavy meat dishes. The bitter substances contained in it stimulate the formation of gastric juice and bile and thus support digestion. Perfume oil ("Essence d'Armoise") is obtained from the dried plants by steam distillation .

Mugwort is also used in phytotherapy . Some ingredients (for example thujone ) are toxic and make prolonged use or high doses questionable. Because of the toxicity of its essential oils , it is warned against the use of mugwort in aromatherapy . The drug is called Artemisiae herba or Herba Artemisiae , it is the dried stem tips with the flower heads collected during the flowering period. In traditional Chinese medicine , it is used in moxa therapy .

The German name Beifuß ( Old High German pīpōʒ, Middle High German bībuoʒ, bībōz) is derived from the Old High German verb bōʒen "stoop, hit". The connection is unclear; it may be that the leaves were pushed for use or because of the repulsive ( apotropaic ) effect they are said to have on so-called dark forces. Anvil is also related .

The folk etymological reinterpretation on foot (already visible in the Middle High German minor form bīvuoʒ) is related to a superstition that mugwort would give endurance and speed when running, as Pliny already reported.

It remains unclear and controversial which plant species were referred to in the medicinal plant books of ancient and medieval authors with the names "Artemisia", "Biboz", "Peipoz", "Peyfues" and "Bucken". In addition to Artemisia vulgaris in antiquity, Artemisia campestris and Artemisia arborescens as well as Artemisia maritima come into question . This name was only reliably assigned to the plant species mugwort ( Artemisia vulgaris ) from the turn of the 15th to the 16th century through illustration and description .

Described as the “mother of all herbs” ( mater herbarum ) ( Macer floridus 11th century), mugwort was the main remedy for the treatment of gynecological diseases. Secondly, it should heal indigestion and urinary obstruction.

Mugwort in rite and mythology

According to Pliny , hikers who carry "Artemisia" with them should not get tired on the journey.

The first herb book in German, the Prüller herb book written in the first half of the 12th century , described the ritual use of mugwort herb in obstetrics:

“Biboz… iſt wib zediu gŏt. da ſi there enjoy. bint irz uf the book. ſi enjoy ſa zeſtunte. nim iz from scire. daz daz ineider it close. "(" ... Mugwort is good for the woman who is recovering from childbirth. Tie her mugwort on the stomach and she recovers quickly. Take it away again immediately so that there is no incident of internal organs. ")

Mugwort should have a special relationship with the summer solstice . Hence its names "Sunbent belt", "Sant Johans herb" and "Himmelker". Girded with a wreath of mugwort was the bonfire danced around. This wreath was then thrown into the fire “together with all hostility”.

In earlier times the mugwort herb was used in Central Europe at the summer and winter solstice (especially during the twelve Rauhnächten ) together with other dried herbs to ward off evil spirits in houses and stables as a fumigant. The origin of this tradition is believed to be in ancient ritual acts of the Germanic peoples.

Mugwort is the first of the nine herbs in the Old English text Nine Herbs Charm , see there for details.

In the Middle Ages mugwort was considered a very effective remedy for and against witchcraft. In addition, it was part of many so-called magic recipes. At the ridge stapled with their tops down, mugwort defends allegedly flashes and keeps disease away. The same applies to the Thorellensteine or fool's coal , which is believed to be found on the roots of the plant on St. John's Day.

“Beyfůssz: or Buck. ... The magi dig this root vff S. Johanns abent / ſo the ſonn vndergadt / ſo find ſye darbey ſchwartze köenlin at the root hanging. Vnnd the alſo / I went ſelb / i eint a special secret what would be dealt with with it. ... "

"Artemisia ... The root is rarely used, some make a lot of white from the beefyx, which are nothing other than the old, dead black roots of them, they are supposed to be a reliable remedy against the falling disease , and are collected around St. John's Day in the summer. ... "

In the 19th century (1824 - approx. 1900) mugwort roots were used in German-speaking countries to treat epilepsy .

In the Federal Gazette No. 122 of July 6, 1988, Commission E of the former Federal Health Office published a (negative) monograph on mugwort herb and mugwort root. It does not recommend therapeutic use.