Classic pharmaceutical drugs are dried parts of plants such as these linden blossoms .

Drugs or medicinal drugs are parts of plants, fungi, animals or microorganisms that have been preserved and are mostly used for the production of medicines . They are usually preserved by drying . Certain biological substrates without a cellular structure such as waxes and resins and other deposition products are also counted as drugs. In earlier times, mineral medicinal drugs were also described. Today, pharmaceutical drugs are largely herbal in nature.

Drugs are used as natural raw materials for the extraction of medicinally effective ingredients and also as auxiliary materials in the manufacture of pharmaceuticals. Isolated, chemically defined drugs of biological origin are called biogenic drugs . The study of drugs (drug science, pharmacognosy ) is a branch of pharmaceutical biology .

A drug book that had a major influence on western pharmacy, which also had oriental drugs available in the early Middle Ages, was Circa instans , published in the 12th century .

The clove is a medicine and a spice at the same time.

The term “drug” describes medicinal plants ( drug plants , medicinal plants ) or parts of plants that have been made durable and usable by drying and has become synonymous with spices , spices , pharmacy goods and other things. In common usage today, the term is also used - short for intoxicating drug  - to denote a substance or its preparations that are used by people to create a state of intoxication or for satisfaction - in the case of addiction.

Drug was borrowed into German around 1600 from the French drogue 'spice, chemical, pharmaceutical agent' . This word probably got into French from Dutch or Low German, since French drogue is first attested in northern France. The starting point is to moderate Dutch drug vaten or Middle Low German drȫgevate be. Originally meaning `` dry barrels '', i.e. `` container for dry, non- liquid goods '', the substantiated adjective drug was probably used abbreviated not only for the containers, but also for the goods stored in them, so that the meaning of `` spice, Medicines' developed. The underlying adjective (compare Dutch droog , Niederd. Dröge ) is etymologically related to the synonym dry . An unlikely assumption is based on an Arabic origin.

Classification of drugs with examples

In the following examples, the (new) Latin official names of the drugs are given in brackets in italics . In the original (old) Latin drug name, the type of drug (often in the plural) was placed in front of the genitive of the parent plant (e.g. Flores tiliae , Folia sennae , Fructus foeniculi ). Since an alphabetical sorting according to parent plants is more important than the type of drug in the case of tea drugs, in the case of herbal drugs in the new Latin name the parent plant is brought forward and the drug type is generally used in the singular as an additional simplification (e.g. Tiliae flos , Sennae folium , Foeniculi fructus ). In the case of non- herbal drugs (e.g. Adeps lanae , Lichen islandicus , Cera alba ), the old names have mostly been retained. In addition, as in general for medicinal products and medicinal herbs, there are also popular names for drugs.

In the case of herbal drugs, a distinction is made in plant morphology into flower , leaf , fruit , herb , rhizome , bark , seed and root drugs .

There are also herbal drugs without a cellular structure, such as gum arabic ( gum arabic ), tragacanth , myrrh , balsam of Peru ( balsamum peruvianum ) or raw opium .

Drugs made from mushrooms

Drug groups according to ingredients

Another classification of drugs is the division according to the chemical nature of the active ingredients into alkaloid , essential oil , bitter , tannin , glycoside , saponin and mucilage drugs .

Drug groups according to use

Psychogenic drugs are known as intoxicating drugs, also known as “ drugs ” for short in everyday language . Medicinal drugs whose effects are ascribed to magical or religious principles as miracle drugs .

Production and use forms

Drugs can be collected or harvested from wild stocks or from cultures . Provisions of species protection must be observed. The optimal harvest time for herbal drugs depends on the presence of maximum amounts of active ingredients and varies depending on the part of the plant: in general, bark is produced in spring, herbs shortly before, leaves at the beginning or during the flowering period, flowers shortly after flowering, seeds and fruits shortly before or when fully ripe and roots and rhizomes are harvested from late autumn, after the growing season. Herbal drugs must be as free from dirt and insects as possible . Fresh plants should be processed quickly after harvest; Dried drugs have a longer shelf life. Drying takes place gently in the air at normal ambient temperature or in drying systems, where the water is removed from the plants in a stream of warm air at temperatures of 35 to 60 degrees Celsius, depending on the nature of the drug and the sensitivity of the ingredients. Most of the time, the drugs are crushed after drying, depending on the degree of crushing, the product is roughly cut (lat. Concisus ), finely cut (lat. Minutim concisus ) or powdered (lat. Pulvis ). In addition, drugs are also used whole (lat. Totus ) without crushing them . Drugs can be subjected to germ reduction processes in order to prevent microbial spoilage during storage, although treatment with gamma radiation or ethylene oxide is not permitted in Germany.

Drugs must be stored dry and protected from light. 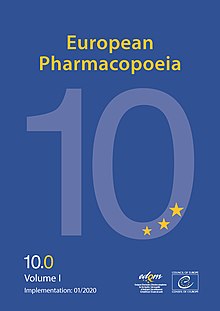 The quality of many drugs is specified in the European Pharmacopoeia.

As medicinal substances or pharmaceuticals, drugs are subject to special quality requirements, which are reflected in the relevant standards and are largely laid down in the monographs of the pharmacopoeias or other collections such as the German Drug Codex (DAC). According to the pharmacy operating regulations, only starting materials may be used in the recipe and defecation whose proper quality has been determined and documented. For finished medicinal products that contain drugs or drug preparations, the pharmaceutical entrepreneur has to provide evidence of the assurance of a faultless and standardized quality in the drug approval process. 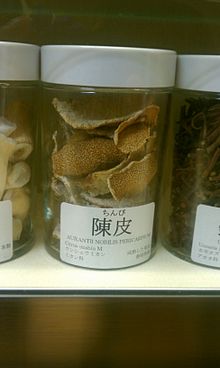 Chenpi, 陈皮 (mandarin peel, Citri reticulatae epicarpium et mesocarpium ) is used in TCM and is specified in the European Pharmacopoeia.

In addition to the obligatory identity check to rule out mix-ups, various purity checks are carried out on drugs. General tests are the determination of foreign components, the ash content and the drying loss . From a toxicological point of view, tests for pesticide residues , heavy metals , microbial contamination and possibly for mold toxins and radioactive isotopes are important. Depending on the ingredients, characteristic value determinations such as determination of the bitter value , the swelling number , the saponification number or biological activities (e.g. hemolytic activity) must be carried out. Specific content determinations can also be part of the test specification to ensure the minimum content of active substances.

Drugs with potent ingredients and low therapeutic index (alkaloids, glycosides , Anthraglykoside ) are used as powder or extract with a standardized content of active ingredients in the pharmaceutical preparation, is in addition also prescribed, an upper limit to the minimum content to poisoning by an accidental overdose to avoid.

Standardization means that medicinal drugs differ from tea plants that are used in food and luxury goods.

With the advent of Traditional Chinese Medicine (TCM) in Europe, drug quality control was faced with new challenges. Unknown stem plants and illegible labels led to the confusion of TCM drugs, and the press reported on heavy metal pollution, contamination with mold toxins and pesticides, alarming amounts of toxic ingredients ( aristolochic acids ) and the addition of synthetic substances. In Germany, according to a ruling by the Lüneburg Higher Administrative Court, TCM formulations are classified as medicinal products, so that a quality test for the drugs they contain falls within the remit of the pharmacies. There are now working groups that deal with the standardization of Chinese medicinal drugs and develop quality standards. The German Medicines Codex (DAC) contains a framework monograph for the testing of TCM drugs. Further regulations are the Pharmacopoeia of the People's Republic of China and its annotated German translation of the Pharmacopoeia of Chinese Medicine: Monographs of the Pharmacopoeia of the PR China as well as the monographs from the Drug Monographs and Analysis series .

The Bavarian State Institute for Agriculture (LfL) is conducting cultivation trials for various TCM drugs in Bavaria, some of which are now available in stores. Controlled cultivation means that risks such as mix-ups and the contamination described above can be avoided.

Medicinal teas are also available in portions in the infusion bag.

Cellular drugs are almost always used as an extract because of their high builder content.

Tin cans for storing drugs in the pharmacy

The simplest form of the extract is the preparation of tea: the coarsely or finely cut tea drug is processed into a drink by decoction ( decoction ), infusion or cold setting ( maceration ) with water. With certain drugs, such as umbelliferous fruits , it is common practice to “nudge” (that is, squeeze something ) just before use to help them release their active ingredients. Drugs for tea preparation (medicinal tea) are sold as loose goods or portioned in tea filter bags. Depending on the indication, single drugs or drug mixtures (tea mixture, Latin species ) are used.

In addition to the internal use as tea, the classic tea drugs or their extracts - partly in traditional tradition as home remedies - are also used externally in the form of compresses, rinses, wraps, baths and herbal pillows.

Drug preparations are made from drugs by processes such as pulverization, extraction , pressing, distillation , also in combination with fermentation , fractionation , enrichment and purification. In the process-related production of extracts, in addition to water, organic extractants such as lower alcohols are also used, which means that lipophilic substances are extracted better. This results tinctures , essential oils , expressed juices, liquid, thick and dry extracts , which can be used directly in part, but more often industrially processed on various medicinal forms ( herbal ).

Some herbal drugs are added to herbal teas not for the purpose of medicinal effects, but to improve the taste or appearance (" jewelry drug "). Non-cellular drugs are also used as pharmaceutical excipients , such as gum arabic, beeswax or wool wax.