Almost a third of all amphibian species are threatened with extinction

Since 1966, Red Lists of Endangered Species have been drawn up, with the aim of trying to quantify the degree of endangerment of species. Species conservation programs aimed mostly a single risk or from the protection extinction from endangered species.

The justification for the protection of species is ultimately a problem of natural ethics and environmental ethics . On the one hand, a distinction must be made between a human-oriented argument based ultimately on considerations of utility, for which the existence of species is directly useful for humans, e.g. for the provision of ecosystem services . For example, it is argued that wild bees should be protected because their function as pollinators is of great value for agricultural production (see also bee deaths ). This is the position of anthropocentrism . On the other hand, there are justifications that ascribe an independent (intrinsic) value to the species as part of nature, whether or not they are individually useful for humans. This attitude is summarized as physiocentrism . Most of the time, there is no sharp distinction between the two approaches when giving reasons. The ethicist Konrad Ott differentiates between different levels of justification: The environmental ethical (final) justification at the top level is followed by legal norms derived from it, which are made manageable in guidelines. This then results in nature conservation action concepts that lead to regional models and ultimately to specific, local measures. Mixing the justification levels leads to confusion.

Today, species protection is carried out on a scientific basis, based on ecological knowledge of the autecology of the species to be protected and their habitats . However, like all ethical questions, it cannot ultimately be justified scientifically (cf. naturalistic fallacy ). The definition of goals and priorities for the protection of species is always the result of political and social decisions that follow their own norms.

The conservation of biodiversity as one of the elements of biodiversity has been an argument in favor of species protection that has been gaining great interest since the 1990s. This can be viewed at the level of molecular genetics (genetic diversity), the populations and metapopulations at the species level and the level of the biological communities. The aspect of recreation and homeland protection traditionally also plays a role in species protection.

The protection of populations of selected species is an important tool of species protection. In addition to the direct protection of individuals of threatened species and their habitats, methods of population protection also include population support through special conservation breeding programs and reintroduction, such as the Przewalski horse in Mongolia or the lynx in the Harz Mountains .

The protection of animals threatened with extinction, particularly bird species with a positive emotional impact, was at the beginning of the development of species protection. One of the oldest associations is the German Association for Bird Protection , which was founded in 1899 by industrialist Lina Hähnle . It was later decided that it was necessary to protect plants from extinction as well. In 1910 the " Plant Protection District Berchtesgaden Alps " was established. According to the current state of knowledge, the term species protection was first used in 1912 by Otto Rudorff . The lawyer reported on the fourth conference for the preservation of natural monuments in Prussia on December 9, 1911, at which legal regulations for nature conservation were discussed. The term was also used here and there in the Weimar Republic, but it was not until the time of National Socialism that it became established within the administrative apparatus that was responsible for nature conservation. The protection of animals and plants was now called species protection. Biotope or ecotope protection usually does not focus on individual animal or plant species. Individual species that occur there and are threatened with extinction often play an important role in public discussion and legal argumentation. In 1976 the Federal Nature Conservation Act came into force.

Situation and discussion in Germany

For the International Day of Species Protection in 2012, NABU presented a current analysis of the state of nature and species protection in Germany. In it he presented bird species worthy of protection and rare habitats and called the result “shameful”. He criticized that laws and the designation of protected areas alone would not save species and habitats. Above all, the work for the conservation of biological diversity needs to be financed, otherwise the acute extinction of species cannot be stopped. Successes have been recorded with otters, beavers, eagle owls, cranes and wolves. Overall, however, the trend is negative: the curlew, the lapwing and the partridge are threatening to disappear.

The legal basis for species protection in Germany is the Federal Nature Conservation Act (BNatSchG). The law recognizes two levels of protection for animal and plant species:

The protection categories build on one another. All strictly protected species are also specially protected. 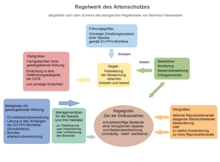 There are currently no other legal bases for protected species, i. H. none of the not in one of the above The species listed in the lists is a legally protected species in Germany (animal and plant species are, however, also subject to numerous other legal provisions, for example the Federal Hunting Act ). In the lists, not only individual species but also higher-ranking groups such as genera and families are protected across the board; this means that all associated species are automatically protected by law. An overview of the legal protection status is provided by B. the WISIA database of the Federal Agency for Nature Conservation.

A widespread misunderstanding exists particularly in relation to species on the Red List of Endangered Species . However, the red list is only an expert opinion on the hazardous situation. This does not result in any legal protection.

These protections essentially apply to direct killing or persecution. If a protected species is harmed due to human activity, however, a number of exceptions apply. As a rule, the statutory protection of species does not extend to the killing or disturbance of animal and plant species due to agricultural, forestry and fishing use (provided that “good professional practice” has been observed). For species that are exclusively nationally protected (i.e. those that are specially protected on the basis of the Federal Species Protection Ordinance), there is also no special protection in the event of damage due to an " intervention ", for example a construction project. For the remaining species, the developer may have to prove by means of a species protection test that he has not violated the protection provisions.

At the international level there is a whole series of programs to promote species protection. Some examples are: