House of the Badische Zeitung in Freiburg

Austin FX4 with advertising by the Badische Zeitung

The Badische Zeitung (short BZ ) is a company incorporated in 1946 and in Freiburg moved daily newspaper . There it is the only print medium of its kind. It is published by "Badischer Verlag", which employs around 490 people. The parent company of this publisher is Badisches Pressehaus GmbH & Co. KG. The BZ sees itself as an independent, non-partisan daily newspaper with a Christian attitude. The sold circulation is 128,605 copies, a decrease of 24.8 percent since 1998.

After the collapse of the Third Reich , employees of the publishing house and editors of the former Frankfurter Zeitung (FZ) tried to revive it. Since the American occupying power forbade this, because they considered the Frankfurter Zeitung to be too contaminated - in the sense of Nazi policy - there were various attempts to found a new newspaper to succeed the FZ. The former publishing director of the Frankfurter Zeitung, Wendelin Hecht , started a new company in Freiburg . Heinrich Rombach, the former editor of the Freiburger Tagespost , received a license from the French occupying power to found a new newspaper, the Freiburger Nachrichten . On January 9, 1946, a contract was signed between the publishing company H. Rombach & Co., Wendelin Hecht and the publishing bookstore Herder & Co. GmbH, represented by its managing director Josef Knecht , with the aim of founding the Badischer Verlag in Freiburg. This company was to continue the Freiburger Nachrichten as a national newspaper with a Christian basis under the name Badische Zeitung .

The first issue of the BZ appeared on February 1, 1946. It was created in the washroom of the burnt-out Herder publishing house because the Rombach printing house was the victim of a bomb attack. Initially, the BZ appeared twice a week with a length of six to eight pages at a retail price of 20 pfennigs. From May 1950 the BZ appeared four times, from September 1951 finally six times a week. In 1950, when the license requirement had long since been lifted and the Basic Law guaranteed freedom of the press , the Freiburg publishers Poppen & Ortmann joined the shareholders of the Badischer Verlag. They had published the Freiburger Zeitung (founded in 1784) until 1935 and, after forced sales to Vera Verlagsanstalt GmbH from Berlin, a subsidiary of the central publishing house of the NSDAP, the Franz-Eher-Verlag , printed it until 1943. In 1961 the company moved from the Herder building to the BZ's newly built press and publishing house on Basler Landstrasse (now Basler Strasse / Lörracher Strasse). In 1997 the companies Rombach and Poppen & Ortmann acquired the Herder publishing house's shares in Badischer Verlag. Both houses merged the publishing house, the subsidiaries associated with production (e.g. newspaper printing, online publishing) and other companies in the group (e.g. delivery) in 1998 in the Badisches Pressehaus holding company . They each held 50% of the shares until the end of 2019. Poppen & Ortmann KG has been the sole shareholder since 2020.

From 1998 to 2009 Ralf Dahrendorf was a consultant and author of the BZ. Since the beginning of 2004, the BZ has been offering free WMV videos on local events on its website . After investments of 25 million euros, the newspaper has been produced on the Cortina printing machine from the Würzburg-based manufacturer Koenig & Bauer since 2006 using waterless offset printing . The process, which was revolutionary for newspaper printing, was used for the first time in the world in Freiburg. The Badische Zeitung was named the world's best newspaper printer by IFRA in 2008 .

Since January 3, 2006, BZ has been operating an Internet information platform for local topics from the Freiburg area called fudder - News from Freiburg , via Online Verlag GmbH Freiburg , which was awarded the Grimme Online Award in June 2007 .

In December 2013, the Simon Wiesenthal Center selected a cartoon by Horst Haitzinger published in the Badische Zeitung among the top 10 anti-Semitic, anti-Israel abuse of 2013. The Badische Zeitung had already rejected the allegation of anti-Semitism a few days after its publication in November.

The Badische Zeitung , like most German newspapers continuously edition lost. The number of copies sold has fallen by an average of 1.3% per year over the past 10 years. Last year it decreased by 2.5%. In 2019 it was 128,605 copies. The share of subscriptions in the circulation sold was 85.7 percent. 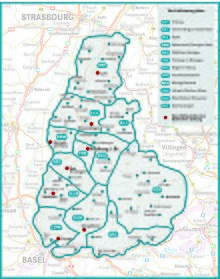 The circulation area of ​​the Badische Zeitung

The distribution area of ​​the BZ includes the city of Freiburg , the districts of Breisgau-Hochschwarzwald , Emmendingen , Lörrach and Waldshut , the southern part of the Ortenau district and part of the Schwarzwald-Baar district . The BZ's local editorial office, office and ticket service are located in the Freiburg BZ building in the city center.

The local editions are:

The Poppen & Ortmann KG is on holding Badisches Pressehaus sole owner. 16.7% of the Badischer Verlag is held in trust for the shareholders by the editorial team, but is not entitled to profit.

From around the mid-1990s onwards, the BZ organized the Freiburg Press Ball, originally organized by the Freiburg Press Social Fund, in the Freiburg Concert Hall. In the social area, there is the BZ Christmas wish campaign and the Children help children campaign . With the BZ Award , the Badische Zeitung honors advertising agencies and medium-sized companies that advertise particularly originally in print and online.

Together with partners, the Badische Zeitung organizes the “Job Motor” competition, in which companies that create new jobs are awarded.

After Ralf Dahrendorf's death, the publishers of the Badische Zeitung , Christian H. Hodeige (retired as publisher at the end of 2019) and Wolfgang Poppen , donated the Ralf Dahrendorf Prize , which has been awarded every two years to local journalists from print and online media since 2011 . The award is given to German-language articles or series "which explain in an exemplary manner how democracy works at the local level and how it develops". The award is made in three different ways: the first prize is endowed with 5000 euros, the second prize with 3000 euros and the third prize with 2000 euros. The award's patron is Christiane Dahrendorf, the social scientist's widow.

The online offshoot of the BZ, www.badische-zeitung.de uses a since 2010 in the comments area real name constraint .