The SWR Symphony Orchestra Baden-Baden and Freiburg was one of two symphony orchestras of the Südwestrundfunk (SWR). Since it was founded in 1946, it has been known for numerous world premieres of new music . Since 1996 the orchestra has been based in the Freiburg Concert Hall .

Logo of the SWR Symphony Orchestra

On September 28, 2012, the SWR Broadcasting Council decided to plan concrete steps for the merger of the orchestra with the Stuttgart Radio Symphony Orchestra in 2016. As a result, the symphony orchestra was included in the Red List of Culture of the German Cultural Council in October 2012 and classified in Category 1 as threatened with closure . In the last few years leading up to the merger, there have been many protests against the merger of the orchestras, for example 148 composers and 160 conductors wrote an open letter to the SWR director to oppose »the end of the independence of a globally unique orchestra with an unmistakable profile " to raise. Rescuing the orchestra by transferring it to a foundation failed due to insufficient commitments for the foundation capital. The merger is expected to proceed without layoffs. The job cuts will only take place "through age-related departures". The German Orchestra Association demanded that a collective agreement be concluded.

The orchestra said goodbye to its audience on July 16, 2016 with a concert on Freiburg's Münsterplatz and on July 17, 2016 with a final concert in the Freiburg Concert Hall. 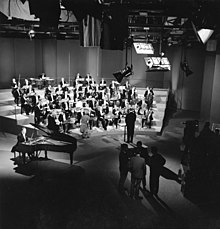 Orchestra of the ARD

Programs and facilities of the Südwestrundfunk