The Südwestfunk (SWF) was from 1946 to 1998 the state broadcaster for the state of Rhineland-Palatinate and southern Baden-Württemberg . It originated in the French occupation zone . The exact border to the transmission area of ​​the Süddeutscher Rundfunk (SDR) in Baden-Württemberg ran along the former border line of the states of Baden and Württemberg-Hohenzollern in the south and to Württemberg-Baden in the north of the state.

Südwestfunk's headquarters were in Baden-Baden , and there were state studios in Freiburg , Tübingen and Mainz . In 1998 the SWF merged with the SDR to form Südwestrundfunk (SWR). 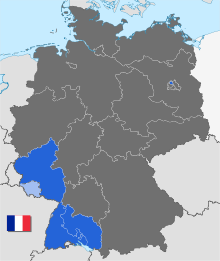 ... with the exception of Lindau and West Berlin, identical to the French zone of occupation

Until 1945 there was no independent broadcasting company for the later broadcasting area of ​​the Südwestfunk . The area belonged to the catchment area of ​​the broadcasting companies or Reich broadcasters in Frankfurt am Main, Stuttgart and Saarbrücken . In 1945 the radio station Radio Koblenz was built by the French occupation . On March 31, 1946, the Südwestfunk went on air for the entire French occupation zone, with the exception of its special zone Saarland , in Baden-Baden ( Hotel Elisabeth ). The facility was funded by the "Direction générale des affaires culturelles". On October 30, 1948, it was constituted as an institution under public law with its seat in Mainz and thus became the state broadcaster for Rhineland-Palatinate and the southern, French-occupied states of Baden and Württemberg-Hohenzollern.

When the state of Baden-Wuerttemberg was formed in 1952, the SWF was placed on a state treaty basis and remained responsible for its southern part of the country, where, together with Baden-Baden, the transmitter was again located. For many years, Baden-Württemberg was the only federal state that had two state broadcasters under public law (SDR and SWF).

On May 31, 1997, the Prime Ministers of Baden-Württemberg and Rhineland-Palatinate signed the State Treaty on the establishment of the two-state broadcasting company Südwestrundfunk (SWR). At the beginning of 1998, the SWF and SDR formally merged to form the SWR, over the next few months the radio and administrative boards were constituted, and in March the directors were elected. The new programs went on air from August 30th. On October 1st, the SDR and SWF were finally dissolved, rights and obligations were transferred to the SWR.

The reasons for the merger were mainly of a financial nature. The streamlining of the organizational structures and the reduction of the administrative apparatus freed up considerable funds. In addition, the anachronistic presence of two state broadcasters in Baden-Württemberg and the inevitable competitive situation associated with it was hardly justifiable. Demographic aspects also played a role, so the fee income of the Südwestfunk continued to decline, while the SDR was financially well equipped with its metropolitan areas.

The SWF only broadcast one radio program until 1951 (later referred to as SWF1 ). Then the 2nd radio program SWF2 started broadcasting via VHF . From 1949 to 1958 the journalist Dr. Wilhelm Sandfuchs on the church radio of the SWF.

On August 3, 1964, the third radio program followed on VHF, initially as the " guest worker program ", which was expanded and further developed in the 1970s into the music and service wave SWF3 .

On April 5, 1969, the SWF, together with the Süddeutscher Rundfunk (SDR) and the Saarländischer Rundfunk (SR), began the third television program Südwest 3 for the federal states of Baden-Württemberg, Rhineland-Palatinate and for the Saarland . The program was gradually expanded to become a full program; there have been daily broadcasts since 1971.

In the blanking interval of this program, the SWF started its regional teletext offer in 1984 under the name SWF-Text , which was later merged with the Südfunk-Text, which was started at the same time, to form Südwest-Text (the text production site is now the Landesfunkhaus in Mainz).

On May 17, 1997, the youth multimedia DASDING, produced jointly with SDR, went on air as part of the DAB pilot project in Baden-Württemberg. It is a digital 24-hour offer for young people between 14 and 24 years of age, which is distributed via VHF, DAB and ADR as well as on the Internet. DASDING combines the media of radio, television and the Internet into a new type of offer.

The Südwestfunk used the opening bars of the trio Bald emblazoned to announce the morning from Wolfgang Amadeus Mozart's “ The Magic Flute ” as a pause . It could be heard in different variations in the course of use, but was later no longer in use due to the jingles .

In cooperation with other broadcasters, the SWF delivered programs and contributions for the following television programs: 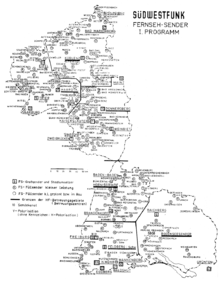 SWF network for the first television program in 1969

For broadcasting its radio programs and the first TV program of the ARD, the SWF recently had the following basic network stations . In addition, the SWF used the Bad Marienberg , Bornberg and Blauen transmitters of Deutsche Telekom and the Grünten location of Bavarian Broadcasting . With the exception of the Bodensee transmitter, all transmitter locations will continue to be operated by SWR.