The Saarländischer Rundfunk ( SR ) is an institution under public law and the state broadcasting corporation of the Saarland with its seat on the Halberg in Saarbrücken (Funkhaus Halberg). The SR is a member of ARD .

In 1929 the first radio broadcast was broadcast from the Saarland, which at that time was still called the Saar area and was under the administration of the League of Nations . After the re-integration of the Saar area into the German Reich as a result of the vote in 1935, the "Reichssender Saarbrücken" was founded as part of the "Reichs-Rundfunk GmbH Berlin".

In Germany immediately after the war , the Saarland formed a special zone in the French occupation zone because of the plan to integrate the Saar into French territory ("rattachement") ; therefore, in 1945/46 , the military government set up “Radio Sarrebruck” as well as “Radio Saarbrücken” (March 17, 1946), also with a German-language program, outside of its official transmitter in Baden-Baden . The transmitter was subordinated to the newly created civil broadcasting office. When the plans for incorporation had to be abandoned, the station received an appointed director (Fréderic Billmann) on December 31, 1947 . In 1952, the first broadcasting law for Saarland came into force, as a result of which the radio station Radio Saarbrücken was converted into an "SR GmbH ".

(One year later the first television program was broadcast in Saarland, but not, as is often assumed, by this company, but by " Telesaar ", a German subsidiary of the French broadcaster " Europe 1 ".)

With the accession of the Saarland to the Federal Republic of Germany on January 1, 1957, the Saarländischer Rundfunk GmbH ceased to exist and the public broadcasting corporation for the Saarland called Saarländischer Rundfunk was included in the ARD . A quarter of a year after "Day X" (July 6, 1959), which formed the economic connection between the Saarland and the Federal Republic, the SR then broadcast a television program again. At first it turned out to be very modest, initially only in the form of half-hour regional broadcasts of commercials, but the SR's television program quickly grew. From 1961 - until today - a regional program for the Saarland with the state show "Current Report" was set up in the evening program until 8 p.m. Since then, Saarland Broadcasting has also taken on a share in the ARD's community television program.

On April 5, 1969, the three southwest German broadcasters Saarländischer Rundfunk, SDR and SWF started their joint third television program "Südwest 3", sometimes also referred to as "S3", with a broadcast evening from Saarbrücken. It was the youngest of a total of five so-called "third television programs" from the ARD companies . Initially it was broadcast on only three days of the week, from September 1969 on four days of the week, and in 1971 it was expanded to become a week-long program. For many years, Südwest 3 had its focus on education and training programs as well as a weekly regional evening that was held separately in the three federal states, including Saarland. In the blanking interval of this program, the SR started its regional teletext service under the name Saartext on October 2, 1989 .

Europawelle Saar went on air on January 2nd, 1964 . At the same time the third radio program started - initially as a " guest worker program ", but then also filled with other programs, and since January 7, 1980 it has been a regional and state program as SR 3 Saarlandwelle . The second radio program was further developed from 1967 onwards to become the sophisticated Studio Wave Saar . From 1972 to 1990 one was operated in cooperation with the Süddeutscher Rundfunk (SDR) and the Südwestfunk (SWF), and from 1991 to the end of 1994 the program was largely connected to the second radio program of the Hessischer Rundfunk ( hr2 ). The program has been called SR 2 Kulturradio since January 1, 1995 and has been a full, culture-oriented program ever since . The program was gradually expanded to become a full program until there had been daily broadcasts since 1971.

On November 6, 1989, SR started its fourth radio program SR 4 . This was a mixed program which, since March 1, 1999, has mainly broadcast programs for foreigners as well as direct broadcasts from the Bundestag and Landtag . In the rest of the time, SR 4 mainly took over the programming of SR 2 Kulturradio and SR 3 Saarlandwelle. SR 4 also broadcast the radio broadcasts of the Open Channel in Saarland. On March 30, 2002, however, this was discontinued after a resolution by the Saarland state parliament .

On September 11, 2006, due to the renaming of "Südwest Fernsehens" to "SWR Fernsehen", the name was changed to "SR Fernsehen"; the cooperation with SWR television (formerly Südwest Fernsehen) will continue. SR TV and Südwestrundfunk continue to broadcast a jointly designed program that v. a. is supplemented by regional broadcasts at noon (repeats) and on the evening before (from 6 to 8 p.m.) as well as regional news broadcasts (at 4 p.m., 5 p.m., 6 p.m., 9:45 p.m.).

As the youngest radio program, the SR started our thing on March 1, 1999 in cooperation with the also restarted Dasding from SWR.

In January 2004, the Saarländischer Rundfunk changed its radio structure slightly: The SR 4 program was discontinued, and our thing was expanded from a project to a young program.

On November 26th, 2006 the 50th birthday of the SR was celebrated with a ceremony in the Saarlandhalle. The Radio Symphony Orchestra (RSO) Saarbrücken played the 9th Symphony by Ludwig van Beethoven under the direction of Stanislaw Skrowaczewski .

The Saarland radio produced a number of well-known journalists and reporters throughout Germany. Probably the best known among them is Werner Zimmer , who is nicknamed “Mr. Sportschau “received. From 1966 to 1993 he moderated the most watched TV sports program in Germany, the ARD sports show. 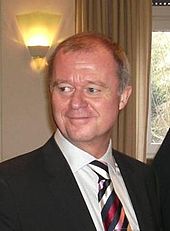 Saarländischer Rundfunk employed an average of 544 employees and an additional 194 freelance workers in the 2019 financial year . The number of permanent positions has therefore decreased slightly since 2009 (581 employees).

Intendants and directors of the SR and its predecessor institutions:

After the death of artistic director Fritz Raff on January 27, 2011, the Broadcasting Council elected the lawyer and European media lawyer Thomas Kleist as his successor on April 15, 2011 . Kleist took office in July 2011.

The directors and their areas of responsibility are:

Programs of the SR

The SR organizes the following television and radio programs alone or in cooperation with other radio or television companies:

As a pause , the Saarländischer Rundfunk used a few bars of the melody of the miner's song Glückauf, the Steiger is coming (exactly to the line "... and he has his bright light at night ..."). It was heard in different variations in the course of use, but is no longer in use due to the use of today's jingles .

Digital broadcast of the SR

The Saarländischer Rundfunk broadcasts its radio program - in addition to the analogue VHF transmission - since December 30, 2000 also via DAB . Up until December 31, 2011, transmission capacities were used in the Digital Radio Saar GmbH network. The SR has been operating its own DAB transmitter network in Block 9A since the beginning of 2012, which was converted to the current DAB + standard in 2016.

The occupancy of the DVB-T multiplexes in Saarland:

The ProSiebenSat.1 Media AG and RTL Group will not participate in a broadcast via DVB-T in Saarland itself.

Awards given by the Saarländischer Rundfunk

Loss of millions at Telefilm Saar

The SR held a 100% share in the production company Telefilm Saar GmbH (TFS) through the subsidiary Werbefunk Saar GmbH, which has existed since 1950 . Their managing director Joachim Schöneberger caused high financial damage of up to 25 million euros through fraud and breach of trust as well as forgery of documents, which had to be borne by the broadcaster. The TFS supervisory board, which included Fritz Raff , the then SR director, only noticed the irregularities in the summer of 2006. On April 24, 2007 Schöneberger was dismissed without notice and as a result Telefilm Saar was liquidated to avoid an inevitable bankruptcy.

Programs and facilities of the Saarländischer Rundfunk