Geneva, House of the League of Nations (photo from 1931)

The League of Nations ( French Société des Nations , English League of Nations , Spanish Sociedad de Naciones ) was an intergovernmental organization based in Geneva . Created as a result of the Paris Peace Conference after the First World War , it began work on January 10, 1920. Its goal of peace through arbitration settle international conflicts, international disarmament and a system of collective security to ensure permanent, he could not fulfill. After the Second World War and the founding of the United Nations (UNO), the remaining 34 members decided unanimously on April 18, 1946 to dissolve the League of Nations with immediate effect.

The idea of ​​a federation in a community of states and the expression " international law " were first presented in 1625 by the Dutch legal scholar Hugo Grotius in his book De iure belli ac pacis ("On the law of war and peace") as "foundations for international law". The Konigsberg philosopher Immanuel Kant demanded in 1795 in his book Perpetual Peace , the International Law , where he described the idea of a "consistently peaceful community of nations" for the first time in detail. The ideas of the Enlightenment spawned an international peace movement in the 19th century and led to the Hague Peace Conferences in 1899 and 1907 . But the “Hague Association of States”, as Walther Schücking, who was trained by Kant, called the institution, failed above all in the German Reich on the issue of mandatory international arbitration.

The League of Nations should both promote international cooperation , mediate in cases of conflict, and monitor compliance with peace treaties. In contrast to the UN, its statute contained an obligation for the member states to immediately and directly , i.e., immediately , in the event of an act of war by a state against a member state . H. without the prior decision of a body to rush to military aid to the affected state.

The League of Nations was given the unofficial name of the Geneva League because of its location and location . The first seat was in the Palais Wilson building complex in Geneva , which he continued to use after moving in 1933/1936 and which currently serves as the seat of the United Nations High Commissioner for Human Rights (UNHCHR). Between 1933 and 1936 he moved to the newly built Palais des Nations (League of Nations) complex in Geneva’s Ariana Park, where the institution’s headquarters remained until its dissolution in 1946. 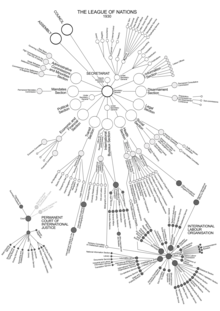 Organization chart of the League of Nations (1930)

The League of Nations meeting room in Geneva, in front of the building of the Palais des Nations

The organization of the League of Nations anticipated the organization of the United Nations . The biggest difference to today was, on the one hand, the much smaller number of full-time employees and, on the other hand, the fact that almost all resolutions had to be passed unanimously. The ability of the League of Nations to act was therefore severely restricted. There was no need for the permanent members to have a right of veto.

Organs of the League of Nations:

The General Secretaries of the League of Nations were: 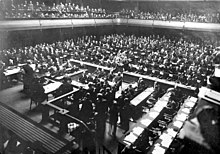 Final session of the League Council in Geneva in 1926

Meeting of the League of Nations in Lugano in 1928

Initially, the League had some success in the solution is less conflict, for example, to Spitsbergen , the Åland Islands and Corfu . Major disputes such as the Ruhr conflict , the Spanish civil war and the Sudeten crisis were fought outside of the League of Nations. But he was a pioneer in decolonization , fighting hunger and looking after refugees, and gained experience in finding consensus.

The failure of the League of Nations to intervene in the Japanese attack on China in 1931 was controversial . Japan withdrew from the League on March 27, 1933 because of its approval of the Lytton Report . In 1935 he finally demonstrated his powerlessness in the Italian attack on Abyssinia : the most severe sanctions imposed remained ineffective; Both the USA (oil) and the German Reich (coal) continued to supply Italy, thereby demonstrating the body's impotence. The Soviet Union, a member since 1934, was expelled in 1939 because of the attack on Finland (" Winter War ").

The federal government had no significant influence on the prehistory of the Second World War . Efforts to negotiate the German Reich in its place when it increasingly leveraged the Versailles Treaty since 1933 were unsuccessful. The later diplomat of the Federal Republic, Walter Truckenbrodt , described this process in 1941 from the perspective of the “German Reich” and called the federal government “platonic” because it had no real power base. The constitutional lawyer Carl Schmitt also called the Geneva League in 1936 a mere "label", a facade behind which the political content changed regularly. The League of Nations had no military troops of its own with which to intervene in crisis regions. A theoretical decision on military action could have been taken by the League of Nations, but the dispatch of troops was left to the members in national organization. The conflict on the Greek-Bulgarian border between October 25 and 28, 1925 is a successful example: After the Bulgarian government had called the General Secretary of the League of Nations in accordance with Article 11, Paragraph 1 of the League of Nations statutes, French, British and Italian officers sent to the region.

On March 19, 1938, Isidro Fabela protested , as a representative of Mexico and on behalf of the then President Lázaro Cárdenas , as the only government representative in the League of Nations, against the " Anschluss " of Austria by National Socialist Germany.

Various reasons are given for the failure of the League of Nations:

Members and non-members of the League of Nations

The founding members were 32 allied states, namely the victorious powers of the First World War , which signed the Versailles Treaty. In addition to the British Dominions and India, this also included Czechoslovakia , which actually only formed after the war .

When a country declared its exit, that exit took effect exactly two years later. In the literature, the first date is usually found, sometimes (example :) the second.

As early as 1920, 13 states that were neutral during the war were invited to join the League of Nations.

Law on the Treaties of Locarno and Germany's entry into the League of Nations of November 28, 1925

Many states were admitted later or only joined later, the first as early as the end of 1920.

Some independent states remained completely absent from the League of Nations.

According to the Versailles Treaty (Articles 45 to 50), the League of Nations was responsible for the administration of the Saar area, which had been separated from the German Empire as reparations . The previously German colonies and the Arab territories separated from Turkey were transferred to the League of Nations . The parts of French Equatorial Africa ( New Cameroon ) ceded by France to Germany in 1911 were, however, reconnected to it. The League of Nations in turn awarded these areas as mandates to member states. After the Second World War they were administered as UN trust areas. In detail these were: