The British Mandate of Mesopotamia ( Arabic الانتداب البريطاني على العراق, DMG al-Intidāb al-Barīṭānī ʿalā l-ʿIrāq ) was a class A mandate of the League of Nations under Article 22 , which was transferred to Great Britain after the collapse of the Ottoman Empire as a result of the First World War in 1920 . The handover was set at the Sanremo Conference on April 25, 1920. France was awarded the League of Nations mandate for Syria and Lebanon . Faisal I , who was declared King of Syria in Damascus in March 1920 , was expelled from Syria by the French in July 1920.

The civil government of postwar Iraq was originally headed by High Commissioner Sir Percy Zachariah Cox and his deputy Colonel Arnold Wilson . After the murder of a British officer in Najaf , the British were unable to restore order despite reprisals. From the Hakkari Mountains north of Iraq and the Urmia plains in Iran , thousands of Assyrians began to seek refuge from the Turkish persecution in Iraq. The biggest problem, however, was the growing anger among Iraqi nationalists, who felt they had been betrayed of their country because of their mandate status. The nationalists realized early on that the mandate was just a cover for British colonialism . 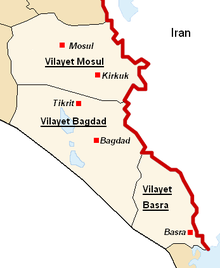 The three former Ottoman provinces of Mosul, Baghdad and Basra

Three important anti-colonial secret organizations were formed in Iraq during 1918 and 1919. In Najaf, the Jamiyat organized itself at Nahda al Islamiya (The League for Islamic Awakening). The Al Jamiya al Wataniya al Islamiya (The Muslim National League) was founded with the intention of mobilizing the population for a major uprising. In February 1919 Shiite merchants, Sunni teachers and officials, Shiite and Sunni ulema and Iraqi officers founded the Haras al Istiqlal (The Guardians of Independence) in Baghdad . The Istiqlal group had members in the cities of Karbala , Najaf, Kut and Hilla .

The Grand Mujtahid of Karbala Imam Shirazi and his son Mirza Muhammad Riza began to organize the uprising. Shirazi then proclaimed in fatwas that tolerating the rule of non-Muslims over Muslims was contrary to Islamic law. He called for jihad against the British. In July 1920 there was a rebellion against British rule in Mosul , and that uprising spread south into the Euphrates Valley . The southern tribes, who valued their political autonomy, were quickly convinced and joined the uprising. However, they did not work together against the British, and that hampered the uprising's impact. The country was in a state of anarchy for three months; the British found it difficult to restore order with the help of Royal Air Force bombing .

Ath Thawra al Iraqiyya al Kubra , or the Iraqi revolt against the British of 1920, marked a turning point in modern Iraqi history. For the first time Sunnis and Shiites , tribes and townspeople came together for a common cause. In the opinion of Hanna Batatu, author of a pioneering paper on Iraq, the creation of a nation-state in Iraqdependedon two essential factors: the integration of the Shiites and Sunnis into the political essence and the successful resolution of the old tribal conflicts the cities on the rivers and among the tribes themselves around the food-producing plains of the Tigris and the Euphrates. The 1920 rebellion brought these groups together, if only briefly. This represented an important first step in the long and difficult process of building a nation-state out of the Iraqi conflict-ridden social structure.

Establishment of the kingdom

At the Cairo Conference in 1921, the British set the parameters for Iraqi political life, which lasted until the July 14th 1958 revolution . They elected the Hashimite Faisal ibn Hussein , son of the former Sherif of Mecca Hussein ibn Ali , as the first king of Iraq. They built a native Iraqi army and they negotiated a new treaty. To confirm Faisal as king, a plebiscite was carried out on a question. 96 percent voted for Faisal. The British saw in Faisal a leader who had enough nationalist and Islamic credibility to be widely recognized, but who was also vulnerable enough to depend on their support. Faisal traces its origins back to the family of the Prophet Mohammed . His ancestors had political authority in the holy cities of Mecca and Medina since the 10th century . The British believed that this satisfied traditional Arab standards for political legitimacy. In addition, they thought that Faisal would be accepted by the growing nationalist movement for his role in the 1916 Arab revolt against the Turks, for his accomplishments as a leader of the Arab independence movement, and for his leadership qualities.

The last major decision at the Cairo Conference was related to the new Anglo-Iraqi Treaty of 1922. Faisal was under pressure from the nationalists and anti-British mujtahids from Najaf and Karbela to cut British influence in Iraq and the duration of the treaty. Knowing that the monarchy depended on British support and wishing not to repeat the incident in Syria, Faisal carried out a moderate rapprochement with the British. The 20-year treaty, ratified in October 1922, said the King should heed British advice on all matters affecting British interests and financial policy while Iraq has a balance of payments deficit with Britain, and he says that British officials are appointed to specific posts in all 18 departments and that these act as overseers and inspectors. A later financial deal, which significantly increased Iraq's financial burden, forced Iraq to pay half of all British officials' costs. British commitments with the new treaty included various forms of aid, such as military aid and support for Iraq's early accession to the League of Nations. In effect, the treaty made Iraq politically and economically dependent on Britain. While unable to prevent the treaty, Faisal clearly felt that the British were declining in their promises to him.

On October 1, 1922, the Royal Air Force in Iraq was reorganized as RAF Iraq Command, which had control over all British forces in the kingdom.

The British decision at the Cairo conference to build a native Iraqi army was an important one. In Iraq, as in other developing countries, the army was the best organized body in the otherwise weak political system. Because of this, the military was able to gain more power and influence while the political system was under great political and economic pressure during the period of the monarchy. Because the officers in the new army were necessarily Sunnis who served under the Ottomans, and the lower ranks were mostly occupied by Shiites, Sunni dominance in the military could be maintained.

Before the collapse of the Ottoman Empire, the British-controlled Turkish Petroleum Company (TPC) had concession rights in the Vilayet Mosul . Under the Sykes-Picot Agreement of 1916, agreed between Britain and France and determining future control over the Middle East, the area would fall under French influence. But in 1919, under the Long-Berenger Agreement, France withdrew its claim over Mosul. The 1919 agreement guaranteed France 25 percent of the TPC as compensation.

Beginning in 1923, British and Iraqi negotiators had bitter negotiations over new oil concessions. The major obstacle was Iraq's insistence on a 20 percent stake in the oil company; this share was intended for the Turks in the original TPC concession and was awarded to the Iraqis after San Remo. In the end, the Iraqi negotiators agreed to the agreement, despite strong nationalist opposition to this concession. The League of Nations was about to vote on the status of Mosul and the Iraqis feared that the area would fall to Turkey without British help. In March 1925 an agreement was signed that did not contain any of the Iraqi demands. The TPC - now IPC - was guaranteed a full concession for a period of 75 years.

With the signing of the Anglo-Iraqi Treaty and the resolution of the Mosul question , Iraqi politics gained new momentum. The emerging class of Sunni and Shiite tribal landowning sheikhs competed for power with wealthy and respected urban Sunni families and Ottoman-educated army officers and bureaucrats. Because the recently established political institutions were the work of a foreign power, and because the concept of democratic government had no forerunner in Iraqi history, the politicians in Baghdad lacked legitimacy and did not develop a deeply rooted electorate. Despite a constitution and an elected parliament, Iraqi politics was more of a changing alliance between important personalities and cliques than a democracy in the western sense. The lack of widespread political institutions prevented the young nationalist movement from penetrating the social structures of Iraq.

The new Anglo-Iraqi treaty was signed in June 1930. He offered a "close alliance, full and open consultations between the two countries on all questions of foreign policy" and "mutual assistance in the event of war". Iraq granted the British the right to use the air bases near Basra and al-Habbaniyya and the right of troops to march through the country. The 25-year treaty was to come into effect with the entry of the Kingdom of Iraq into the League of Nations. That happened on October 3, 1932.