The Hashimites have always enjoyed a special role in Islamic history. So they were in the Middle Ages from the obligation to Zakat payment exception. Several branches of the clan later perished. The scholar Ibn Hubaira called five branches of the Hashemites in the 12th century: the Abbasids , the Aliden , the descendants of Abu Talib of sons Ja'far and'Uqail and the descendants of al-Harith ibn 'Abd al-Muttalib.

There have been several dynasties in Islamic history claiming Hashimite origins. Most belonged to the Alidian branch of the family. The Sherif of Mecca were also Aliden. Ever since the Sherif began to claim Hashimite origin from the end of the 19th century, the term Hashimites has primarily been used to refer to this ruling family. The ruling dynasty of Jordan also descends from her.

The modern dynasty of the Hashimites

The rule of the Sherif over Mecca and Medina has been attested since the late 10th century. The line of the Husainids ruled Medina and the line of the Hasanids Mecca. The head of the Hasanids in Mecca held the title of Grand Sherif. The main task was to organize the annual pilgrimage to Mecca and to secure the caravans of pilgrims. Although various overlords had to be recognized since the decline of the Abbasid caliphate , for example the Ottomans , the position of the Sherif in the Hejaz was not shaken by this.

After the Ottomans deposed the Husainids in 1517, the Hasanids were able to expand their influence on Medina. Since different branches of the family fought for the office of Grand Sherif, an independent power politics was not possible. One of the most important Grand Sherif was Ghalib (1788-1813), who for a long time paced between the Ottomans, Wahhabis and Egyptians until he was deposed by Muḥammad ʿAlī , the quasi-independent Ottoman governor of Egypt. The Ottomans subsequently increased their control over the Grand Sherif from Syria and Palestine and held part of their family hostage in Istanbul .

First half of the 20th century

Faisal I with family in Syria 1920 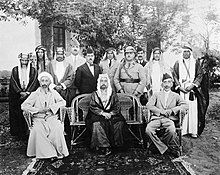 The kings Ali of Hejaz (left), Abdullah of Transjordan (center) and Faisal of Iraq (right) 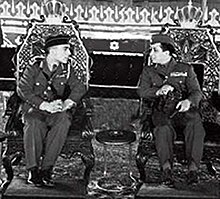 Also Husain ibn'Alī had been held hostage in Istanbul when he was in 1908 appointed by the Sultan as Sherif of Mecca. Husain initially remained loyal, but rose up against the Ottomans during the First World War ( " Arab Revolt " ) and tried, with British help, to found an independent Greater Arab Kingdom. These plans failed because of the colonial interests of the British and French , who divided Mesopotamia among themselves in 1918/20. Two younger sons of Hussain succeeded in establishing two new monarchies under British rule. After a failed attempt in Syria in 1920, from where the French expelled him again ( Battle of Maysalun ), Faisal I became the first king of Iraq in 1921 , his younger brother Emir Abdallah I rose to become an emir and later (1946) to become king from Transjordan - today's Jordan - on.

Grand Sherif Husain had already assumed the title of King of the Hejaz (i.e. the area around Mecca and Medina ) in 1916 - at the beginning of his revolt against the Ottomans . After Ataturk had deposed the last Ottoman caliph in 1924, Hussain took over the vacant title of caliph and with it the provocative claim to rule over all Muslims. The Saudi ruler ʿAbd al-ʿAzīz ibn Saʿūd (often for short: Ibn-Saud), then still Sultan of the Nedschd and from 1932 first king of Saudi Arabia , immediately attacked the Hejaz as the greatest competitor for rule in the narrower Arab region and its capital Mecca. The reasons were both political and religious. Hussain had nothing to oppose this militarily. In order to save his empire for his dynasty, Hussain abdicated in 1924 in favor of his son Ali and at the same time renounced the title of caliph. At the end of 1925, King Ali had to flee Mecca from the Saudis. The ancestral land of the Hashimites has since been lost to this dynasty and is still part of Saudi Arabia today.

The old caliph city of Baghdad , now the capital of the Hashimite Kingdom of Iraq , became the center of the Hashimites . There the branch of the dynasty expelled from Mecca went into exile. A son of the ex-king Ali, the Emir Abd al-Ilah (murdered in July 1958), subsequently rose to long-time Prince Regent of Iraq (1939-1953). The fact that the Hashimite rule in Iraq was seriously endangered due to its alienation and pro-British attitude was first made clear by the Arab nationalist coup of 1941, which was, however, crushed by the British military . Against the national revolutionary Egypt under Gamal Abdel Nasser , which from 1952 /53 and especially since the Suez crisis of 1956 an anti-Western all-Arab nationalism represented, the Hashemite kingdom of Iraq and Jordan developed the decisive pro-Western counter-power ( Baghdad Pact in 1955, Union both kingdoms 1958) which, however, had long since been undermined domestically. The bloody military coup in Baghdad in July 1958 overthrew Hashimite rule in Iraq, exterminated the majority of the Hashimites living there (including King Faisal II and his uncle Abd ul-Ilah ) and thus reduced the dynasty to the less important neighboring state of Jordan.

In Jordan, too, Hashimite rule was long threatened by Arab nationalist currents. Added to this was the explosive power of the Israel - Palestine conflict. The first Jordanian Hashemite King Abdullah had in 1948 at the lost war involved against Israel, but then agreed with Israel to a partition of Palestine, from the previous " Transjordan a" Total Jordan "" 1949 made and the royal dominion over the holy places Jerusalem registered; in July 1951 King Abdallah was assassinated because of this policy, which Arab nationalists perceived as treasonous. The then annexed West Bank and Jerusalem were lost to Israel in 1967 due to the defeat in the Six Day War (June 1967).

Abdallah's grandson, King Hussein of Jordan (1952–1999), also had to survive numerous assassinations aimed at overthrowing the Hashimites in Jordan. Hussein survived this as well as the attempt of the Palestine Liberation Front (PLO) under Yasser Arafat to gradually take over the state of Jordan with its Palestinian majority from within by forcibly driving the PLO out of the country in the 1970/71 Jordanian civil war .

In this way, but also through a diplomatic rocking policy, which was mainly based on the USA and thus continued the old pro-Western hashimite tradition, the Jordanian branch of the dynasty survived to this day. Hussein's son, King Abdullah II of Jordan, who has been ruling since 1999, is said to go back to Hāschim ibn ʿAbd Manāf in an unbroken male line , but his mother is English .