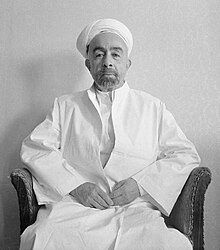 Abdallah ibn Husain I or Abdallah I ( Arabic عبد الله الأول بن الحسين, DMG ʿAbdallāh al-auwal bin al-Ḥusain ; * 1882 in Mecca ; † July 20, 1951 in Jerusalem ) was Emir and King of (Trans) Jordan from 1921 until his death. His main political goal was the expansion of his kingdom; in May 1948 he occupied the West Bank during the Palestine War. 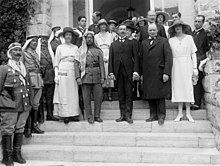 Winston Churchill (right) on March 28, 1921 during a visit to Abdallah (5th from left) in Jerusalem. In the middle: Sir Herbert Samuel .

Abdallah was born in Mecca in 1882 as the son of the Sherif of Mecca Husain and belonged to the Hashimite family . In 1916 he took part with his brother Faisal I in the uprising against the Ottomans and was proclaimed King of Iraq on March 8, 1920 , Faisal on the same day in Damascus as King of Syria . After the outbreak of the anti-British popular uprising, however, he left the country again in September and renounced the throne in favor of his brother, who had just been expelled from Syria. Instead, he was recognized by Great Britain in 1921 as the Emir of Transjordan under the British Protectorate . Abdallah tried to bring the different ethnic groups of his small country together into one nation. In addition, he ruled as absolute ruler, partly against the rules of the Jordanian constitution. In terms of foreign policy, he always supported the British course in the region. Above all, he was one of the few rulers in the region who, in the final phase of World War II and in the years after, rejected the Soviet Union's attempts to expand in the Middle East in favor of the western states . Not least because of this attitude, Transjordan was released from the status of a protectorate on May 25, 1946 and recognized as an independent state of Jordan, which for Abdallah was connected with the elevation to king . However, Abdallah not only wanted to be king of Transjordan, but king of Greater Syria . His notes and demands addressed to the parliaments and governments of Syria and Lebanon in this regard were rejected in November 1946.

In 1947, Abdallah was the only Arab ruler to accept the UN's partition plan for Palestine . Nevertheless, Jordan participated in the 1st Arab-Israeli War from 1948 to 1949 and annexed the areas of the West Bank in Palestine, including East Jerusalem , which the Jordanian troops had captured .

Abdallah was shot dead by a Palestinian assassin in the al-Aqsa mosque in Jerusalem on July 20, 1951 , probably because of his moderate stance towards Israel. Abdallah's grandson, Hussein Ibn Talal , narrowly escaped the attack . The assassin, a tailor from Jerusalem named Mustapha Shukri Usho, belonged to a group that was in contact with Mohammed Amin al-Husseini and wanted to prevent a permanent division of Palestine by Jordan and Israel.

The British orientalist Bidwell has instead put Abdallah's assassination in connection with Abdallah's plans to overturn his unloved son Talal in the line of succession and to unite Jordan with the Kingdom of Iraq in an Arab Union . In accordance with these plans, which Abdallah took up again in 1951, he himself wanted to become king of this united Hashemite kingdom and not appoint his son Talal as heir to the throne for the entire kingdom , but his nephew, the Iraqi king Faisal II.