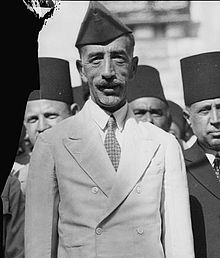 Faisal I visited Palestine in 1933, shortly before his trip to Europe, during which he suffered a fatal heart attack

Faisal was born the third son of Hussein ibn Ali the Sherif of Mecca. In 1913 he was elected as a member of the parliament of the Ottoman Empire from Jeddah . 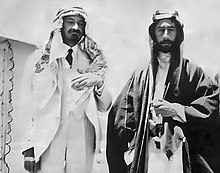 Faisal I. (right) and Chaim Weizmann (in Arabic costume, as a sign of friendship), 1918

After the beginning of the First World War , Hussein ibn Ali planned a revolt against the Ottomans with the aim of forming an Arab state under the rule of the Hashemite dynasty. Hussein sent his son Faisal to Syria in 1915 to establish contacts for this plan. Faisal joined the Arab nationalist group Al-Fatat in Damascus . In June 1916, Hussein ibn Ali declared the Arab revolt . Faisal fell into the role of military leader. His troops comprised around 1,000 irregular forces and around 2,500 former soldiers of the Ottoman army. After the conquest of Akaba by Auda ibu Tayi and TE Lawrence , who as a British officer with whom Hussein had a personal friendship, had developed his own strategies based on the ideas of the Marshal of Saxony , the uprising continued on to Damascus. After the rebels (and a corps of Australian lancers) conquered the city, Faisal marched into Damascus on September 26, ending the four-hundred-year Ottoman rule in Syria.

As head of the Arab legation, he advocated the independence of the Arab Emirates from the Ottoman Empire at the Paris Peace Conference in 1919 . On January 3, 1919, he signed the Faisal-Weizmann Agreement together with the later President of the World Zionist Organization (WZO) , Chaim Weizmann , in which the Arab side accepted the Balfour Declaration . However, as events in Palestine continued, this agreement did not come into effect. 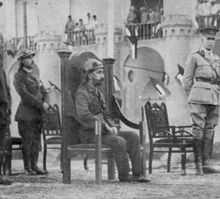 Faisal I at his coronation in 1921

Faisal was proclaimed King of Syria on March 7, 1920 by the Syrian National Congress. Due to the Sykes-Picot Agreement , however , France received the League of Nations mandate for Syria and Lebanon at the San Remo Conference in April 1920 . Faisal I was then expelled by the French after the Battle of Maysalun on July 24, 1920 and went into exile in Great Britain .

The British found another use for Faisal in their mandate Mesopotamia . On March 12, 1921, Colonial Minister Winston Churchill proposed Faisal as the new king of Iraq at the Cairo Conference . After a plebiscite in which Faisal received 96% of the votes cast, Faisal arrived in Iraq at the end of June 1921. The Shiites , who had largely boycotted the plebiscite due to appeals from their clergy, gave him an extremely cool reception.

On August 23, 1921, Faisal was proclaimed King of Iraq . However, he had to recognize British rule over Iraq as a mandate of the League of Nations . Iraq was given the constitutional monarchy as a form of government . In 1930 Faisal achieved the recognition of Iraqi independence by Great Britain in a friendship treaty , whereby Great Britain continued to secure economic influence and military bases. In 1930 he planned the introduction of compulsory military service in Iraq and, according to his own statements, had already begun preparations to set up an aircraft squadron . In 1932 the Kingdom of Iraq was admitted to the League of Nations.

During a stay in Bern on September 8, 1933, Faisal suffered a heart attack in the Hotel Bellevue and died. His eldest son Ghazi I succeeded him on the throne.

Commons : Faisal I.  - Collection of images, videos and audio files

Heads of State of Iraq