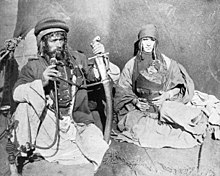 Bedouin family. at the end of the 19th century 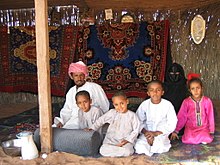 Bedouin family in the Wahiba Sands desert in Oman

Bedouin (from Arabic بدوي badawī “not settled”, “nomadic”) refers to a nomadic desert inhabitant (Arabic: al-bādiya , “steppe, desert”) of the Arabian Peninsula , the Syrian Desert , the Sinai , in parts of the Sahara and in the Israeli Negev . The word badawī is usually not used as a proper name by the Bedouins. They call themselves ʿarab (عرب' Arabs '), in contrast to the settled (non-nomads), ḥaḍar . This term applies to townspeople and peasants alike and corresponds to the Arabic expression fallāḥūna (fallāḥīn) . The term used to distinguish it from the Bedouins, namely Fellache ("splitter, plowman"), goes back to this.

The Bedouins are Arabs and the vast majority of them follow Islam . They consider Ishmael to be their progenitor. Meanwhile settled descendants of the Bedouins are subject to considerable discrimination as Bedun (Arabic for stateless persons) in many Arab states .

Arab Bedouins reached Africa as early as the first century BC: in 46 BC, the Romans captured 22 dromedaries from Beduins in northern Tunisia. Around 400 years later, mounted camel nomads were a constant, serious threat to the Roman African provinces. In the modern age, the Bedouin lifestyle is increasingly threatened, in particular by fixed demarcations, state programs for settlement (with permanent residence) and increasing water scarcity .

Bedouins live mainly from raising cattle . Among other things, they breed dromedaries , sheep and goats , for which they look for grazing in the desert and especially in the fringes of the desert. Bedouins only slaughter their dromedaries on rare occasions. She connects respect and love with these animals that are so important to her. In addition, the dromedary has a high status value. The Bedouins mostly eat bread, milk, cheese, vegetables, dates , pulses and olives . If they live by the sea, fish and seafood are also part of the table. Their animals (goats, sheep, etc.) are usually only slaughtered on special occasions and represent a feast. Bedouins only use their right hand to eat. As with most Islamic peoples, your left hand is considered unclean because this hand is used for cleaning. The dress code is clearly regulated. Men and women wear their clothes and shawls in traditionally given colors. It is improper for men and women to show bare skin.

In some areas such as Egypt or Sinai, Bedouins live from tourism, which they brought to life with globetrotters through their hospitality and then either worked for organizers or had their own holiday camps, e.g. B. in Mahash , Nuweiba , Dahab . For example, self-managed Bedouin camps have been set up on the original beaches in Sinai since the late 1980s and are visited by guests from all over the world.

Bedouins also work as guides for study trips or desert trips . However, these sources of income are becoming increasingly difficult due to the sale of land, displacement by international organizers and government agencies or attacks in the holiday area.

The Arabic -speaking Bedouins are unfamiliar with the Berber-speaking people of the Tuareg in North Africa to be confused. The northeast African Bedscha are also traditionally Bedouins.

Bedouins are still closely linked to their respective tribe , whose patriarchs and sheikhs they can often name up to centuries ago. Some trace their family tree back to the Prophet Mohammed . Disputes not only affect the contestants, but the entire tribe, and if necessary are settled in a court chaired by the sheikhs of the respective tribe. It is also important for a wedding that the bride and groom come from the same tribe or at least from a friendly tribe. Most Bedouins still marry their bint ʿamm , their cousin, to this day . Many Bedouin men still marry more than one woman. 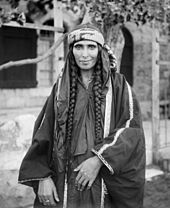 During the Palestine War of 1948, the majority of the Bedouins, who are now only semi-nomadic, fled or were expelled. A large part of the Negev subsequently became state or military territory, and the Bedouins were relocated to a reserve-like area in the northeast of the Negev, which makes up 10% of the area of ​​the Negev.

Since the 1960s, the Israeli government has been trying to encourage more Jewish settlers to settle as well as to move the remaining Bedouin population to cities specially founded for them, e.g. B. Ar'ara BaNegev , Hura , Klassenife and Tel Scheva to relocate and compensate. Bedouins had refused to officially register their landed property since the 19th century in order to avoid taxes.

Since the 1950s, the desert areas have been greened and reforested. The grazing of cattle herds in large parts of the sensitive Negev ecosystem was restricted or banned in order to reduce further damage. Bedouins have been raising herds of goats in this region for decades, which are responsible for the spread of desertification.

In 2008, the human rights organization Human Rights Watch (HRW) called for an immediate stop to the destruction of Bedouin houses in illegal settlements and for an independent investigation. According to HRW, Israel has destroyed thousands of such illegal homes since the 1970s. As the climax of the recent disputes over the evacuation of the state-unrecognized Bedouin village Umm al-Ḥīrān , a teacher and a policeman were last killed in controversial circumstances in January 2017.

Another incident that became internationally known was the demolition of the village of Khan al-Ahmar , which was ordered by the Israeli Supreme Court in 2018. The 180 residents living in dilapidated tin huts that were built next to a motorway, without sewerage and, according to Israel, illegally, were offered a new residential area in Abu Dis or Jericho . Ismail Khaldi is the first high-ranking Bedouin and Muslim diplomat from the State of Israel.

Although the Bedouins are not subject to conscription , the Israeli army has special units made up of volunteer Bedouins, in particular as trackers.

The Bedouins in Israel are often supported by the European Union with humanitarian aid in the form of building materials, tents and the like, which are then regularly torn down or dismantled by the Israeli authorities, often on the grounds of a lack of permits. In June 2019, there was diplomatic resentment when the Israeli authorities offered such seized EU material at an auction.

Bedouins in the West Bank

According to the United Nations Agency for Palestine Refugees in the Middle East (UNRWA), child underdevelopment levels in Bedouin communities in the West Bank are twice as high as those in Gaza . Almost half of the children suffer from diarrhea, one of the main causes of death worldwide in children under five. According to the United Nations Office for the Coordination of Humanitarian Affairs (OCHA) , the Palestinian residents in the northeastern West Bank, which is part of Area C (under Israeli military control), are prevented by Israeli restrictions from building or maintaining their infrastructure such as schools, health facilities or To worry about sewage treatment plants. According to aid organizations, Israeli restrictions on Palestinian access to farmland in the area are starving thousands of people.

As Bidun stateless people in the Arab world are called. In Kuwait, in order to gain full citizenship (including the right to vote), a 1948 law required Bidun to prove that they had lived in the country before 1920. This family tree law still applies to Kuwaitis in general. The bidun status is inherited and results in considerable social discrimination .