This article describes the desert. For the machine gun, see IMI Negev .

Israeli settlements on the edge of the Negev

The Negev desert , also Negeb ( Hebrew נגב South (Israel) , south country; Arabic النقب an-Naqb ), occupies around 60 percent of the State of Israel with around 12,000 km². However, only ten percent of the population live in this area. The Negev is bounded to the west by the Egyptian-Israeli border and the Gaza Strip , to the east by the Arava Depression and to the north by the Gaza - En Gedi line on the Dead Sea . 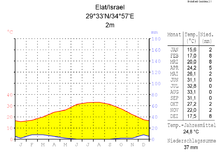 The largest city in the triangle is Beersheba , the capital of the Negev district (about 190,000 inhabitants). About in the middle of the Negev is Mitzpe Ramon on the edge of the Maktesh Ramon crater . The southern tip ends in the cities of Eilat on the Israeli side and Aqaba on the Jordanian side. The city of Dimona with the nuclear reactor at the Negev nuclear research center is southeast of Be'er Sheva .

In the north and west, the Negev is a dusty and partly loess-covered plain, but in the south it is much more varied and is criss-crossed by mountains , valleys and erosion craters ; the largest and most famous is the Makesh Ramon crater . When it rains in winter and spring, the dried out wadis turn into torrents and the desert blooms for a short time. The highest mountain is the Har Ramon with 1035  m . About 25 km north of Eilat is the Timna National Park , the area of ​​the ancient (3000 BC) copper mines that were still exploited into the 20th century.

The Negev Desert is part of the desert belt that stretches from the Atlantic Ocean to India and which, from a climatological point of view, arises because of the existence of the Hadley cell . It is considered the longest - for about 1.8 million years - unchanged visible part of the earth's surface.

The Judean Desert is often mistakenly considered part of the Negev. However, the Judean desert is a rain shadow desert, the Negev desert a dry desert . The imaginary boundary of the two deserts runs roughly in an east-west direction north of Arad (there are different interpretations).

The northern boundary to the Schefela plain is fluid. Depending on the definition, the Negev begins at Kirjat Malachi or at Kirjat Gat . This is because irrigated agriculture has shifted the northern border of the Negev desert dozens of kilometers south in the past few decades.

In the northern Negev, the annual rainfall is 350–400 mm. This rainfall allows the existence of extensive, planted coniferous forests, such as the Lahawwalds or Jatirwalds , which are among the largest in Israel.

The rainfall at Be'er Sheva is already 200 mm annually. The landscape between Be'er Sheva and Sde Boker is characterized by a dry steppe, to the south of which an extreme desert begins. Eilat receives around 30 mm of rain annually, with strong annual fluctuations. Years without precipitation are not uncommon.

Precipitation in the Negev has two origins: Either the rain is generated by the southern foothills of a front stretching over the Mediterranean (only in the winter months) or by a low pressure wedge from the Red Sea , which can sometimes cause violent thunderstorms in the transitional seasons (rare). In Eilat, the second variant of rain is common, while in Be'er Sheva the first is important.

Typical larger mammals of the Negev are Nubian ibex . In addition, Asiatic half donkeys and Arabian oryx antelopes , which were once native there, have been released into the wild. The half donkeys live in the area of ​​the Ramon Canyon and in the Arava Depression. As a specialty, some specimens of the rare Arabian leopard still live in the Negev desert. Striped hyenas and Arabian wolves also appear as other large predators . The animals are protected today, which is why the wolf population in particular has been able to recover. In 1999, around 90 to 160 of the gray predators lived in the Negev. There are two species of gazelle found in the Negev Desert. The Dorcas gazelle is relatively common and occurred in 1985 with over 1000 animals in the southern Negev. The Edmigazelle is much rarer and in the same year there were only 27 animals. The Dorkas gazelle population has remained stable since then. The species occurs locally in the area of ​​the Machtesch Ramon in a relatively high population density. The Negev Desert is home to the Egyptian tortoise ( Testudo kleinmanni ), an endangered species of tortoise.

The Negev was first inhabited by nomads between 4,000 and 7,000 years ago. The first settlements ( Gilat ) emerged in the Copper Age. The Amalekites and Edomites are for 2000 BC. Occupied. In the 14th century BC The knowledge of mining and processing copper in the Negev and Sinai was taken over from Egypt .

By expanding the copper mines in the 9th century BC Be'er Scheva was able to establish itself as a regional trading post during the rise of the Assyrians. Between 1020 and 928 BC Small Jewish settlements around the city are also proven.

With the arrival of the Nabataeans in the 4th century BC Chr. And their development and expansion of the irrigation systems could develop at least five urban centers. The Nabataeans drew their prosperity primarily from the control of the trade in spices, frankincense and myrrh between their capital Petra and the Mediterranean ports.

The Roman Empire claimed the Negev territory for itself from 106 onwards, although the life and culture of the nomadic tribes - as is common elsewhere in the Roman Empire - were little influenced. Christianity was introduced under Byzantine rule in the 4th century. In addition, the population grew drastically as a result of the increasing conversion to agriculture.

Most of the Bedouins , who are now only semi-nomadic, fled or were expelled during the Palestine War of 1948. After the establishment of the State of Israel, a large part of the Negev was declared state (military) territory and the Bedouins were relocated to a reserve-like area in the northeast of the Negev, which only makes up 10% of the area of ​​the Negev.

Since the 1960s, the Israeli government has been trying to increase the number of Jewish settlers - especially English-speaking immigrants - and to relocate the remaining Bedouin population to cities, some of which were founded for this purpose (see Prawer Plan ). In order to be able to take legal action against the nomadic population, grazing of cattle was banned in 1950 in the name of environmental protection - the Bedouins had been raising herds of goats in this region for centuries in large parts of the Negev. Referring to earlier research, Michael Evenari in particular did not regard the Bedouins as sons but as fathers of the desert.

Today most of the Negev is used by the Israeli army.

The nature of the Negev is threatened in particular by Ramat Chovav , an industrial area with predominantly chemical heavy industry and the largest Israeli hazardous waste storage facility (see also the Negev Nuclear Research Center ), as accidents and accidents have occurred here again and again. The city of Tel Aviv dumps its waste in the Negev. 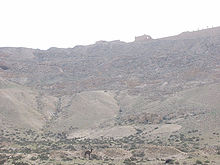 Since the founding of the State of Israel , work has been carried out to make the dream of turning the desert into fertile land a reality. The best-known exponent of this idea was David Ben-Gurion (Israel's first prime minister), who himself moved to the Sede Boker kibbutz to help settle the desert.

Innovative agricultural methods, such as flash water farming based on ancient models , are developed, tested and applied in the Negev. Michael Evenari, born in Metz , was a pioneer . The Israel National Solar Research Institute and the Israel Desert Research Center at Ben Gurion University in the Negev in Sede Boker are among the world's leaders in their field.

Amazingly, fish farming is an emerging industry in the Negev. Fossilized brackish water is pumped into artificial ponds. The yields are extremely profitable because of the desert climate and the industry has proven to be very profitable. The slightly salty fossilized brackish water has proven to be suitable for irrigation of fruits and vegetables grown especially for these conditions. Many of the Israeli agricultural products known in Europe come from the desert, also because the year-round mild climate enables an export advantage.

The Negev is home to some important raw material stores. Large phosphate deposits are being mined intensively and processed for export. Several large heavy industry operations employ thousands of workers. In the Negev, for example, the bromide obtained from the Dead Sea is processed further.

Tourism also plays an important role in the economic use of this desert. The extreme diversity of the Negev desert and the relatively short distances are appreciated by many domestic and foreign tourists, so that the area is constantly developing in terms of tourism.

Many new immigrants, especially from the former Soviet Union and Ethiopia , were also specifically settled there recently. A total of around 600,000 people live in the Negev region.

Large areas of the Negev desert are intended exclusively for military use. The main military airfields in Israel are concentrated in this region, and troop exercises and missile tests are mainly carried out there.