The Roman Empire at the time of Emperor Hadrian around 125 AD. In the extreme southeast is the area of ​​the Arabes Nabatei . 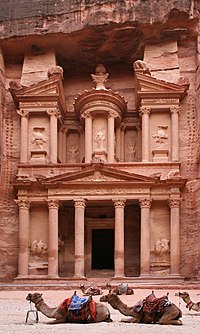 Presumably the Nabataeans migrated in the 1st millennium BC. Chr. Of Arabia into the area between the Red and the Dead Sea one. 587 BC The Edomites immigrated to Palestine from the East Bank . Shortly afterwards (around 550 BC) the Nabataeans moved into the East Bank and the area around Petra . Possibly the Nabataeans also drove out the Edomites. As caravan traders, the Nabataeans controlled the trade routes to southern Arabia on a larger scale and thus gained ground from the 4th century BC. BC considerably in economic and political power. After Antigonus I. Monophthalmos in 312 BC. BC they had tried unsuccessfully to combat, they extended their area of ​​influence to Syria . The historian Diodorus (1st century BC) wrote the following:

“They lead a robber life and often pillage neighboring countries on raids. […] They neither plant corn nor other fruit-bearing trees, nor drink wine, nor do they build any houses. Should someone break these rules, he will be punished with death. […] Although there are many other Arab tribes who use the desert as pasture, they far surpass the others in wealth, although they do not number much more than 10,000, because quite a few are used to frankincense and myrrh and exquisite spices to the sea bring to."

In the time of 150 BC BC to 105 AD they united to form a kingdom of Nabataea , which stretched from the Sinai Peninsula to Northern Arabia. Around 85 BC Chr. Conquered the Nabataeans under King Aretas III. Damascus . Under Pompey they became Roman vassals (63 BC), Aretas was still able to maintain the unity of his empire. It was not until Trajan that the Nabataeans lost their relative independence in AD 106 and were incorporated into the Roman Empire as the Roman province of Arabia Petraea .

In the 19th century it was believed that the Nabataeans were the descendants of Nebajot , a grandson of Abraham . This hypothesis proved historically untenable.

Nabataean capitals at the Temple of Apollo near Kourion in Cyprus .

The Nabataean irrigation system was exceptional . In order to be able to farm in the extremely arid climate , they collected the precipitation from the area and directed it to the fields. The ratio of arable land to total rain-collecting area was between 1:10 and 1:20. The irrigation techniques, the so-called flash water agriculture of the Nabataeans, were studied in the 20th century by Michael Evenari of the University of Jerusalem .

Another lucrative source of income for the Nabataeans was the trade in lumps of tar that floated up in the Dead Sea. This tar was mainly exported to Egypt , where it was used, among other things, for embalming .

Kings of the Nabataeans

Ruler of the kingdom of Nabataea