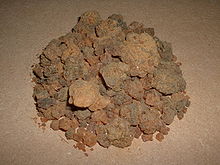 Myrrh from the Dhofar region in Oman 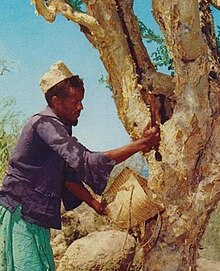 Gathering the resin in Somalia

In ancient Egypt , myrrh was already used for embalming 3,000 years ago . The dried, yellow-brown resin granulate has been used for thousands of years, especially in Yemen , Ethiopia , Sudan and Somalia . In Judaism , myrrh and aloes were part of the proper burial of the corpse; But they were also part of cultic anointings ( ancient Greek Χριστός , Latinized " Christ ", Hebrew " Messiah " means "the anointed"). Myrrh has been used as an aphrodisiac , among other things, since ancient times . Women and men used to use it as a perfume, and beds were drizzled with it before intercourse. From the myrrh resin (according to Avicenna with aloe and saffron ) "plague pills" were made in Europe in the Middle Ages, and this was also said to have an antipyretic effect.

In 1829 , Christian Gottfried Ehrenberg was the first European scientist to describe the myrrh bush, which he came across while traveling through southern Arabia in 1826.

In Greek mythology , Smyrna , the daughter of the priest and king Kinyras of Cyprus, was impregnated by her father. When her child, the Adonis , was born, she turned into a myrrh tree. ( Smyrna is the Greek word for myrrh.)

In the Old Testament there is a description for the production of anointing oil : “Take balm of the best kind: five hundred shekels of frozen drop myrrh, half as much, that is two hundred and fifty shekels, fragrant cinnamon, two hundred and fifty shekels of spice cane and five hundred shekels of cinnamon ( cinnamon blossom) the weight of the shekel of the sanctuary, plus a hin of olive oil, and turn it into holy anointing oil […] ”( Ex 30.23–25  EU ). Myrrh was part of the anointing oil with which the tabernacle and priests in the temple were anointed.

The New Testament reports that the “ wise men from the Orient ” (Greek μάγοι , mágoi ) brought gold , frankincense and myrrh with them ( Mt 2.11  EU ). These respectful gifts were very valuable at the time. At the burial of Jesus the Pharisee Nicodemus donated a hundred pounds of aloes and myrrh ( John 19.39  EU ). Myrrh also plays a role in the death of Jesus . Of the gospel writers, only Mark tells that Jesus was offered wine mixed with myrrh on the cross ( Mk 15.23  EU ), which he refused.

Myrrh is burned as incense , similar to frankincense .

In medieval medicine, myrrh resin was used, for example, in the treatment of wounds, a distinction being made between white and red varieties. As myrrh tincture (often mixed with Ratanhia - tincture ) myrrh today pharmaceutical importance in inflammation of the oral mucosa : it is antiseptic , astringent and promotes scarring , in addition, it has hemostatic effect. It also acts spasm -lösend, is therefore also used for bowel disease: Myrrh is the stress state of the "smooth" intestinal muscles down; this reduces the number of bowel contractions and soothes bowel cramps . In addition, myrrh reduces inflammatory processes in the intestine and has the ability to reduce the formation of free radicals there and thus strengthen the antioxidant protection system. Combined with coffee charcoal and chamomile , an even greater anti-inflammatory effect can be observed. With this combination it could be shown in an RCT (randomized controlled study) of the Essen-Mitte Clinics that the medicinal drugs for maintaining the remission-free (symptom-free) phase in ulcerative colitis were as effective as the synthetic standard drug mesalazine. Also based on this study, the current S3 guideline "Ulcerative colitis" of the German Society for Gastroenterology, Digestive and Metabolic Diseases (DGVS) recommends: "A combination of myrrh, chamomile flower extract and coffee charcoal can be used as a complement in remission-maintaining treatment." Charité Berlin have shown that the medicinal plant myrrh stabilizes the intestinal barrier and protects it from harmful influences through the inflammation-promoting protein TNFalpha. Used internally, it is effective for bronchitis as well as intestinal inflammation . It is used by chewing ( bitter ) or taking myrrh preparations in tablet form.

Myrrh ( Commiphora spp. ) And Opopanax ( resin from Commiphora spp. , Especially Opopanax spp. ) Are characterized by a slightly spicy-sweet scent of balsamic delicacy and are popular in perfumery . While the resin is used more as a fixing component, the oil obtained by steam distillation is already effective in the top note .