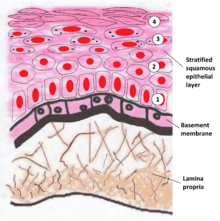 The oral mucosa is the lining of the oral cavity . The Latin name tunica mucosa oris is derived from the Latin tunica , skin ',' tissue (layer) ', mucus ' mucus 'and os (genitive oris), mouth'. The healthy oral mucosa appears pink and moist.

The oral mucosa consists of a connective tissue layer ( lamina propria ) with individual defense cells ( lymphocytes , macrophages ), which is covered by a multilayered squamous epithelium . The epithelium is largely keratinized, but keratinized in the hard palate , the back of the tongue and the gums , as these areas are heavily stressed during the chewing process. In addition to epithelial cells, pigment cells ( melanocytes ), Langerhans cells and Merkel cells also occur in the epithelium . In the area of ​​the tongue there is a specialized epithelium in which the taste papillae are embedded.

In some places, especially the non-horny ones, a tela submucosa is formed, in which salivary glands are embedded, while the submucosa is absent in the areas exposed to high mechanical stress and the mucous membrane is almost immovable. The oral mucosa also contains sensory receptors for tactile , pain and temperature sensations . Surface sensitivity is part of exteroception .

The saliva has a special function. It covers the oral mucosa with a film and thereby protects it from mechanical, thermal, chemical and bacteriological influences.

Changes in the oral mucosa are relatively common, but nevertheless often cause difficulties for the general practitioner in making a diagnosis, as they can occur in a very large number of forms and are often similar despite different causes. Even if the clinical picture is the same, the topography of the lesions leads to different morphological pictures.